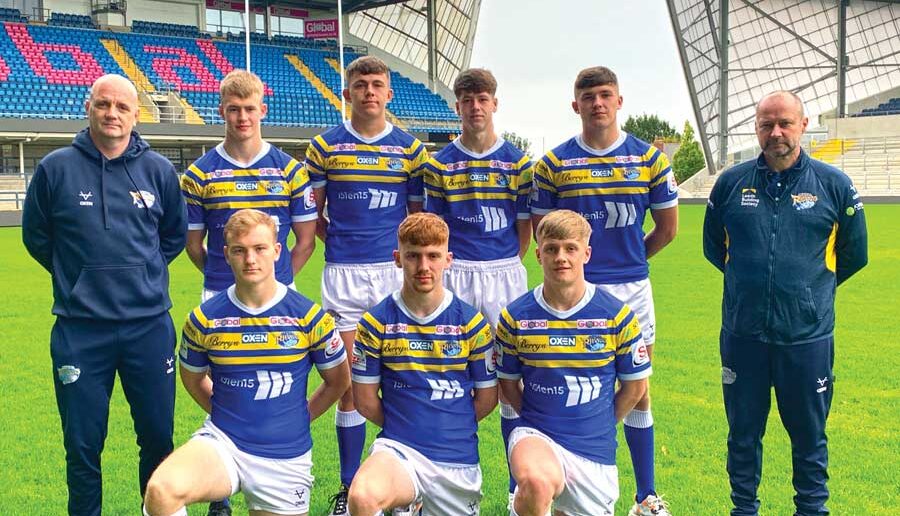 Three of the players have come from the Siddal community club. Firstly, winger Will Gatus attended QEGS in Wakefield but swapped codes to join Rugby League side Shaw Cross Sharks and then Siddal, he won the division one title with the latter and earned a scholarship contract with Leeds. In 2021 he crossed for three tries in three appearances for the Rhinos Under 19s side.

Born in Oxford, forward Jack Johnson was inspired to start playing Rugby League when Rhinos legend Jamie Peacock told him to start playing on a rugby camp. Inspired, he went on to play for Peacock’s junior club Stanningley as well as West Leeds Eagles and Leeds Irish before joining the Rhinos Scholarship. He scored two tries in three appearances for the Rhinos U16 side in 2021 as well as playing for Siddal.

Finally, half back Kai Morgan picked up plenty of silverware while playing for junior side Siddal. He won three division one titles, two Yorkshire Cups and two Challenge Cups during his time in blue and white. He crossed for four tries this season in six appearances for the Under 19s as a mainstay of Chev Walker’s side.

There are two players from Kippax in the 2021 cohort. Full back Alfie Edgell impressed the Rhinos coaching staff as he emerged through the Scholarship in the Academy.  Edgell started playing his junior rugby at Kippax, he won three Castleford Cups and a Leeds Cup. He also played in the BARLA Cup Final in 2016 and previously attended Brigshaw.

Centre Max Simpson first watched Leeds from the terraces at Emerald Headingley. After only a year in the Under-16s, Simpson made the step up to the Academy this season, scoring six tries in seven appearances, earning a place in the Yorkshire Origin squad.

Full back Riley Lumb was first inspired to start playing rugby thanks to his dad, Gary, who previously played for Great Britain’s BARLA squad. Playing for Townsville Tigers and Castleford Lock Lane, Riley has featured in four BARLA finals, winning two with Lock Lane. He has also competed in the National Schools Finals in 2017, 2018 and 2019 with his school, Castleford Academy. He achieved an impressive tally of five tries in just four appearances for the Under 16s this season.

Finally, centre Jack Smith started playing rugby with Featherstone Lions, where he scored twice against Lock Lane to help the Lions win the BARLA Cup. Born in Pontefract, Smith joined the Rhinos Scholarship two years ago and made two appearances for the Under 16s this season, crossing for a try.

Leeds Rhinos Player Pathway Development Manager John Bastian commented, “Firstly, I would like to say congratulations to all the players on their new contracts as they start out on their professional careers at Leeds Rhinos. It is a credit to them and the hard work they have put in. They are all talented players with good standards and the next stage will see them add intensity and a focus on areas of quality within their own development. In the long term, we would like to see all these lads go on to play in Super League for Leeds Rhinos.

“Our talent ID team, led by Simon Bell, have done an outstanding job in identifying these players, going out in all weathers to find the best talent, watching their development since some of them were 10 or 11. It is a great moment to see them now sign their first professional contract.

“They then began their journey with Leeds Rhinos in the Scholarship under Mark Butterill, who makes sure that the fundamentals are in place with their skills honed to a high standard and that they recognise what it takes to be a high performance athlete. That works is continued by Chev Walker as they move through the ranks. I can not emphasise enough how important the role of these coaches is in the development of our young people. Chev and Mark have a hugely significant impact on how these players turn out.

“We also offer the players tremendous support with our dedicated strength and conditioning and medical staff and everyone contributes to developing these players. However, now they have this opportunity, it is down to the young men to show the desire and will to want to achieve that will decide how far they can go,” added Bastian.