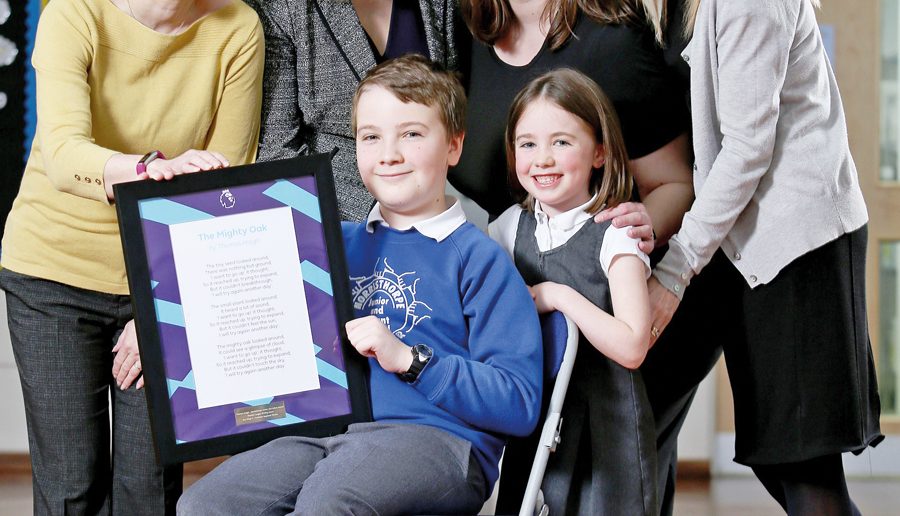 11-year-old Thomas from Norristhorpe Junior and Infant School in Liversedge, West Yorkshire has been named as the Yorkshire and the Humber winner of the inaugural Premier League Writing Stars competition.

Thomas’ poem ‘The Mighty Oak’, was selected as the winning poem for Yorkshire and the Humber in the Key Stage 2 age group (seven to eleven years old). Commenting on Thomas’ poem, Caleb Femi said: “Thomas’ poem was absolutely fantastic. For someone his age, he’s got so much wisdom… I learned so much just by reading his three stanzas, from the seedling to the little plant and to the mighty oak tree. He really took me on a journey of self-discovery, he taught me a lot about nature in itself.”

Premier League Writing Stars launched in September 2017 for children aged five to 11 with the aim of encouraging them to try their hand at creative writing. Inspired by the William Hickson poem ‘Try, Try Again’, the competition asked school children to write around the theme of resilience in any poetic form, including a rap or song lyrics.

The competition was supported by the National Literacy Trust and is part of the Premier League Primary Stars education programme, which has already engaged more than 12,000 primary schools and 13,000 teachers across England and Wales.

Frank Lampard, who has authored 19 books in his ‘Frankie’s Magic Football’ series, commented on his role as a judge: “It’s been very tough to pick winners out of more than 25,000 entries. It’s been a great experience for me trying to read through the lot of them and find winners when it’s such a high standard. It’s been a great competition and we’ve seen a lot of quality. Congratulations to all the winners but congratulations to everybody who took part.”

Visit www.plprimarystars.com to find out how your school can be involved with Premier League Primary Stars and for the latest exciting curriculum-linked resources across maths, literacy and PSHE. The Mighty Oak by Thomas – Norristhorpe Junior and Infant School;

The tiny seed looked around,

There was nothing but ground,

But it couldn’t breakthrough,

The small plant looked around,

It heard a lot of sound,

But it couldn’t feel the sun,

The mighty oak looked around,

It could see a glimpse of cloud,

But it couldn’t touch the sky,