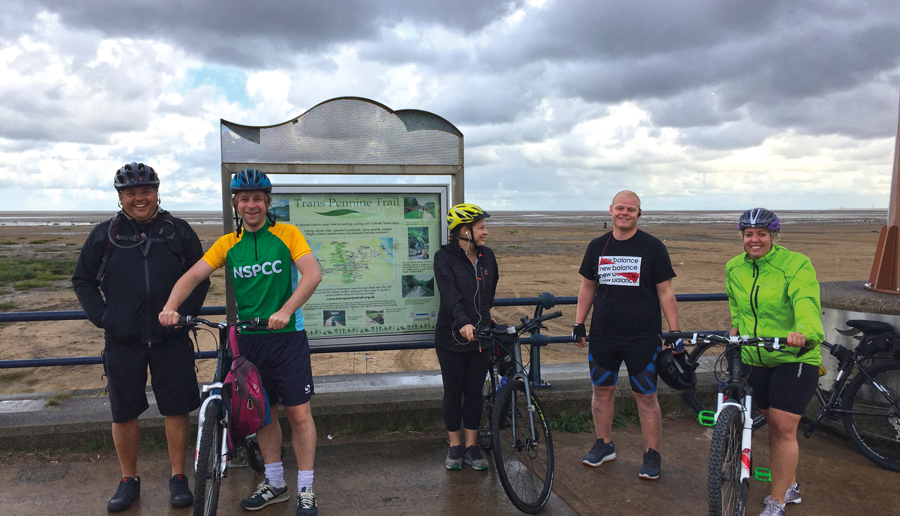 Four relatively unfit cycling novices who  work at The Queens Hotel in Leeds have biked an incredible 215 miles coast to coast along the gruelling Transpennine Trail raising over £2,000 for the NSPCC as part of a terrific three year partnership with QHotels.

QHotels launched its national charitable partnership with the NSPCC back in 2016, bringing guests and employees together to support and raise £300,000 for the charity over three years.

In Leeds, the staff at the QHotels run, The Queens have been busy fundraising with all sorts of events; from taking on the Three Peaks, a sky dive, abseils down the 9 storey hotel and even bee keeping on the roof, with all proceeds of the honey sold donated to the NSPCC.

Four members of staff, Deputy Manager Andrew Jones, Ben Leigh, Sandra Tilson and Joe Bentley have in just three days cycled the scenic but punishing coast to coast Transpennine Trail, starting from Southport and finishing up in Hornsea. Their efforts have raised over £2,000 for the children’s charity.

Deputy Manager Andrew Jones said “We wanted to really challenge ourselves, I love cycling but to date I have never undertaken anything approaching this magnitude.

“This was roughly 70 miles a day for three days and whilst gruelling, all four of us are so proud of our achievement, conquering the Pennines, cycling alongside rivers and canals and through some of the most historic towns and cities in the North of England. As we completed the trail at dusk on the Sunday evening the promised fish and chips were no longer available. So we retired to the nearest public house for a celebratory pint.”

Local Fundraising Manager for the NSPCC , Elaine Kaye said: “The team at The Queens have been amazing throughout the QHotels partnership with the NSPCC, and they have come up with some really innovative ways to support us.

“This bike ride was not for the faint hearted but the results were truly rewarding as they have helped us raise valuable funds for the NSPCC, their hard work means that we can be there for even more children when they need us the most.”

If you would like to sponsor the team, and to find out more, please visit their Just Giving pages;