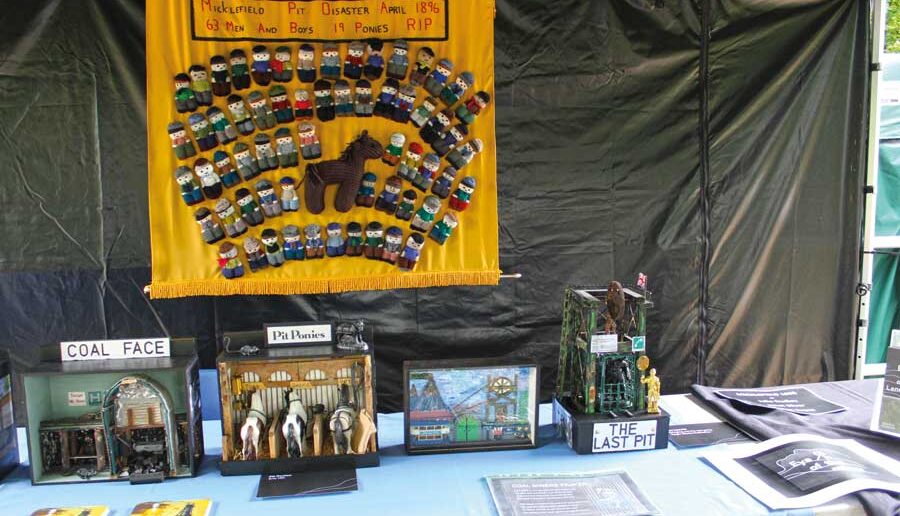 Purls Of Wisdom At Lotherton As Knitted Miners Memorial Is Unveiled

A newly-knitted tribute to the men, boys and ponies who lost their lives in a Yorkshire mining disaster has been unveiled after being lovingly crafted by their descendants.

The tragedy at Peckfield Colliery in Micklefield claimed the lives of 63 people and 19 ponies when, on Thursday April 30, 1896 an underground gas explosion ripped through the mine causing it to collapse.

Now 125 years later, the ancestors of three of the men who died that day have designed and created a colourful commemorative banner featuring 63 knitted miniature miners and a woollen pit pony which has gone on display at Lotherton.

The individually knitted miners were carefully crafted by Julie Dudley, Janet Silver and Susan Evans who are all descended from the men who died in the explosion at Peckfield and who undertook the project during lockdown as a way of staying connected.

Their creation features in Eye of the Miner, a new touring exhibition launched at Lotherton which has seen members of the local community come together to explore the stories behind the city’s mining heritage.

Exhibits scheduled to tour around Yorkshire include 13 striking photographs of retired miners captured in buildings at Ledston Luck pit alongside paintings, mining memorabilia and pit models created by Roger Monks, a retired miner.

Stephanie Davies, Leeds Museums and Galleries’ assistant community curator, who has worked with the miners and their families, said: “For generations, mining was such a fundamental part of life in many communities across Yorkshire and the industry has left a very proud and enduring legacy behind.

“It’s inspiring to see those who worked down the pits and their descendants exploring and celebrating that heritage in their own ways and bringing it to life for visitors that come to Lotherton.

“It’s also incredibly moving to know the descendants of those who sadly lost their lives at Peckfield have had the chance to be involved in retelling their story.”

Eye of the Miner picks up the baton from Temple Newsam’s award-winning Blot on the Landscape exhibition, which in 2019 told the story of mining on the Temple Newsam Estate.

Blot on the Landscape was itself inspired by Mining Memories at Lotherton, which was the first Leeds Museums and Galleries community-curated mining exhibition in 2017/18.

Eye of the Miner will continue to tour Yorkshire at community venues around Leeds and Barnsley to The Mining Museum at Wakefield and then travel North East to New Biggin.

Councillor Mary Harland, Leeds City Council’s executive member for communities, said: “The mining industry is a cornerstone of our local heritage and carries a great deal of meaning for so many people all across Yorkshire.

“As part of the preparations to mark the 125th anniversary of the Peckfield disaster we’ve worked with people in Micklefield who worked in the coal industry, as well as descendants of families affected by the disaster. It’s fitting that they have been involved in telling this important story and ensuring it is retold and their heritage celebrated.”