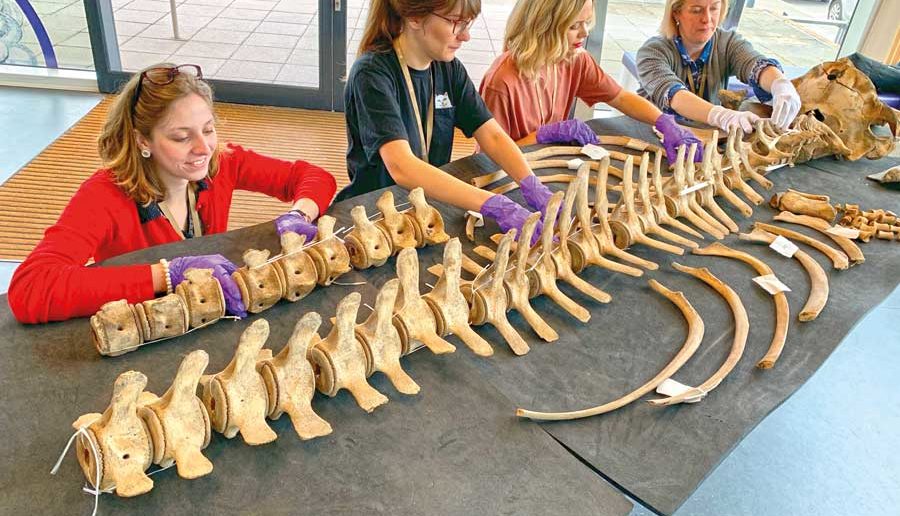 By yorkshire reporter on 05/06/2019 0 Comments
■ Members of the Leeds Museums and Galleries team help Clare Brown, curator of natural sciences, piece together the pilot whale skeleton

The skeleton of a majestic whale cruelly killed by fishermen 152 years ago will be reconstructed for a new display highlighting the plight of our planet’s oceans.

Leeds Museums and Galleries’ long-finned pilot whale is being painstakingly pieced together over the next few months before it is hung from the ceiling of Leeds City Museum later this year.

Currently in storage at the Leeds Discovery Centre, the ill-fated marine mammal was collected back in 1867 off the coast of Scotland when a group of fishermen spotted a pod of whales near Leith.

Deliberating stranding the animals, they killed the entire group for meat and blubber.

The whale has been in pieces in the museum store but with the help of funding from the Leeds Philosophical and Literary Society, the Friends of Leeds City Museums and the National Lottery Heritage Fund it will now be cleaned, conserved and articulated before being displayed to the public in the autumn.

Clare Brown, Leeds Museums and Galleries’ curator of natural sciences said she hoped the display would not only show how attitudes towards whales had changed, but also how much still needs to be done to protect other vulnerable species.

She said: “This whale met a very tragic and gruesome end which was sadly not unusual in 1867. In the century and a half that has followed, global conservation efforts have seen a huge shift in the way whales are seen and thankfully, we are now predominantly focussed on protecting and preserving these magnificent creatures.

“But the existence of many species living in our oceans remains precarious and it will take a similar change in attitudes to ensure not only their immediate survival but the long term sustainability of the marine ecosystem.

“Our hope is that by displaying this inspirational animal in Leeds and telling its story, we can encourage thousands of visitors to think about the environment in a different way and look at the many small steps they can take to become part of the fight to safeguard our seas.”

Found in the North Atlantic and Southern Hemisphere, long-finned pilot whales are named for their unusually long pectoral fins and the once prominent belief that groups had a leader, or “pilot”.

Reaching more than 6.5 metres in length and weighing more than five tonnes, they live in large groups of up to 150 and feed mostly on fish, communicating while they hunt with a series of characteristic clicks, whistles and buzzes.

Once on display, the Leeds whale will be a permanent exhibit and will be used to kick-start a programme of workshops, discussions and talks by experts on whales and the sea.

The museum’s collection staff will also be running events on object conservation and whale anatomy, before the animal goes on display.