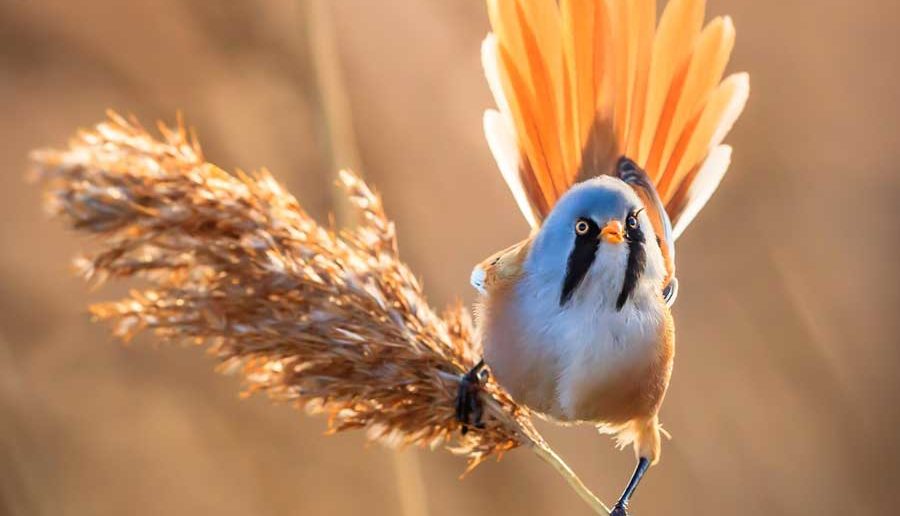 Birders and photographers from across the country have been flocking to St Aidan’s Nature Park, Leeds, for once-in-a-lifetime views of the site’s usually-elusive bearded birds.

Usually, visitors would be lucky to catch a glimpse of the shy birds darting into the reeds. However the bearded tits at St Aidan’s have been straying away from the reedbeds in favour of the Bowers Lake path near the visitor centre. Here, up to seven birds at a time have been hopping around the path within an arm’s reach, much to the delight of nature enthusiasts and photographers.

Gavin Orr, Community Engagement Officer at St Aidan’s, said: ‘It’s just incredible to see these shy birds so close and at ease with us. We’ve had big crowds of people chatting away just a metre from the birds and they don’t seem to be bothered. Photographers are even complaining that the birds are too close to photograph with their huge lenses.”

Bearded tits, also known as bearded reedlings, are charming brown, long-tailed birds with males having a striking black ‘moustache’ rather than a beard like the name suggests.

They are found only in reedbeds, and have suffered severe declines due to the historical loss of this habitat throughout the country. With only 630 pairs breeding in the UK today, the bearded tit is classed as a Schedule 1 species, which affords it extra legal protection under the Wildlife and Countryside Act 1981, along with other species such as golden eagles and barn owls.

The RSPB has been working to boost numbers of ‘beardies’ as well as the bittern and other wildlife such as eels and water voles by restoring and managing reedbeds on its reserves throughout Britain.

At St Aidan’s, the warden team has installed 20 specially-designed reed nest boxes – known as bearded tit wigwams – which provide safe nesting areas for the birds above the water level in the reedbeds. In recent years, the team have found only one nest on site but are hoping to host more with the addition of these wigwams.

The unique wigwam design was invented by the former warden of RSPB Leighton Moss, David Mower, and was pioneered on the reserve in Lancashire. They have been hugely successful there with 25 pairs of bearded tits making their home on the reserve in 2018.