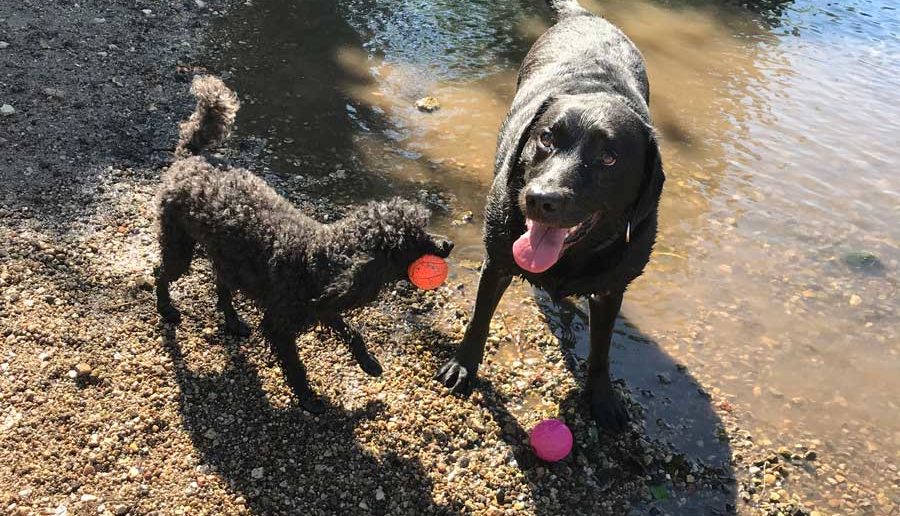 A Yorkshire referral vet has put the spring back in the step of a poodle who was suffering from a rare autoimmune disease which resulted in painful paws that prevented him playing.

Rocco, a five-year-old toy poodle, loved running on the beaches of Devon but during one visit a torn paw stopped him in his tracks.

After this, things got even worse for Rocco as his painful paws made him reluctant to run or walk.

Following a two-year battle with no improvement, Rocco was referred to Paragon Veterinary Referrals in Yorkshire, which soon got to the bottom of the poorly pooch’s condition.

Mandy Walker, Rocco’s owner, said: “When Rocco was two we took him to Devon, where running on the beach was his favourite activity.

“Uncharacteristically, he stopped wanting to walk and cried to be held, so we knew something wasn’t right.

“We checked his paws and realised one was red raw, with a deep cut on it. We don’t know how it happened, but we rushed him to a vet in Devon who gave us some medicine.

“Unfortunately, it didn’t help so we turned to our vet at home to figure out what to do.

“We were told that a dermatologist may be able to help, so we were referred to Paragon.

“While we waited for a diagnosis, Rocco became a completely different dog. It impacted on our family life, as we stopped taking our other dog on so many walks and it felt like we were constantly at the vets.”

Not wanting Rocco to become a house dog, Mandy researched products to ease the pain on his paws.

She said: “We bought him little boots to stop his paws directly touching the floor and we bought a carry sling to take him places.

“It was beginning to get ridiculous. We were desperate to find something to help him.”

Siân Harries, dermatologist at Paragon, organised a biopsy which revealed Rocco had cutaneous vasculitis, which is an inflammation of the vessels which supply blood to the paws. Siân said “Once we knew what we were dealing with, we prescribed some medication which can help to thin blood and is also anti-inflammatory. We also recommended barrier cream for his lesions and plenty of rest.

“This is not a common condition for dogs and in Rocco’s case we were unable to say for sure what caused it. It can have many triggers, from drug reactions to infections.

“We were delighted we could diagnose and treat it and put the spring back into Rocco’s step!”

Mandy added: “The first time Rocco walked again was on Christmas Day. It was the best present we could ask for.

“We still keep the boots on his back paws to protect the surgery area, but he is building up his confidence to walk again.

“We can’t thank Paragon enough for giving Rocco his life back.

“The last two years have been a rollercoaster but Siân was able to diagnose Rocco quickly and offer a treatment that actually worked.

“We can’t wait to take Rocco to Scotland soon and watch him run free in the fields.”

For more information on Paragon Veterinary Referrals, which is part of Linnaeus, visit www.paragonreferrals.co.uk.