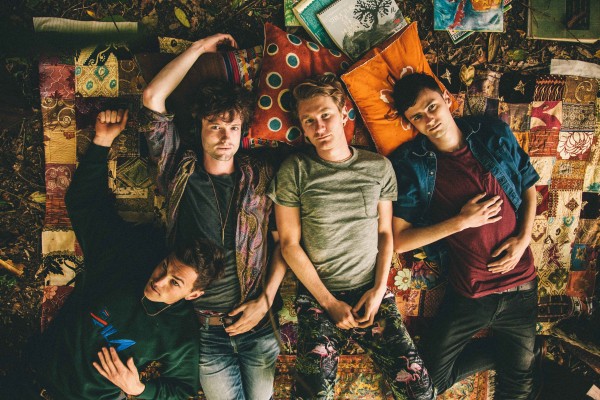 Oxford’s Glass Animals return today with two sneak peeks of what audiences can expect from their autumn 2014 UK shows.

First, the band have shared their performance of ‘Black Mambo’, which was filmed recently at their sold-out show as part of James Lavelle’s Meltdown Festival.  The clip, shot by Giorgio Testi, successfully captures the magnetism and beauty that Glass Animals bring to their performances in a way that very few performance videos do.   Watch

The video’s release coincides with Spotify launching a five-track live session that the band recorded with them while playing the Spotify House at SXSW this year.

Check out both performances via the above linksand see all upcoming Glass Animals UK headline tour dates below.

The band’s debut album ‘ZABA’ was released in June 2014 via Wolf Tone/Caroline International. The album was recorded at Wolf Tone Studios in London, and produced by frontman Dave Bayley under executive production of Paul Epworth. The 11 track record features ‘Pools’, ‘Gooey’ and a reworking of previous limited EP release, ‘Black Mambo’.

The bare bones of Glass Animals’ first songs took shape late at night – inspired by South London’s bass music scene – recorded secretly and quietly in a small room near Elephant & Castle. Surprisingly for everyone, the result was a beautiful piece of ambient electronica called ‘Golden Antlers’, pitched somewhere between Anthony & the Johnsons and James Blake.

Eventually this was shown only to Dave’s three closest friends, now bandmates, who tweaked it and pinched its haunches a little before they put it onto the Internet. In the late spring of 2012 the band released a single on XL’s Kaya Kaya imprint.. A year later, with ‘Black Mambo’, they became one of the first signings to Paul Epworth’s Wolf Tone label.

Created in Epworth’s own studio it is undoubtedly among this year’s most striking debuts. The title, lifted from Dave’s favorite childhood story, comes from William Steig’s The Zabajaba Jungle. Steig’s evocation of childhood adventure, exoticism and discovery is brilliantly fresh. ‘ZABA’ is one complete beast and a journey you will get most from if you immerse yourself fully and listen from start to finish. “The sound of the record,” Dave says, “is like a backdrop of man-made wilderness…”

Influenced by the exploratory, New World scenarios of Apocalypse Now, The Island of Dr Moreau, Heart of Darkness, The African Queen and Mosquito Coast, ‘ZABA’s songs tackle the humanization of nature and human interference with nature. “Even now a lot of my favorite books are those books that I grew up with,” he says. “Things like Zabajaba, like Roald Dahl, like Wind in the Willows. I suppose all I’ve been doing is using those little creatures and animals to cover up what I really meant, to disguise who and what I was really talking about.”

Inspired by Kanye West and Charles Darwin, Nina Simone and The Velvet Underground, ‘ZABA’ is a rich and textured work, a very special record indeed. With Dave producing and Epworth as A&R and mentor, the studio became their home and the band were free to record, improvise and write at their own speed, making their sound a bigger, brighter, heavier and more intense experience than ever before.

The first single, ‘Gooey’ was wobbly and child-like, a hymn to naivety. “There’s a confidence in the way children act,” Dave says. “I was trying to push that confidence into the beat.” ‘Walla-Walla’ goes back to Dave’s love of Timbaland and Dr. Dre, while Intruxx, initially the introduction to the entire record, summarizes this entire new world you’re entering.  “I used to be really into super-clean, no flaws production,” says Dave, “but now I like the context and soul that mistakes, chopped samples, and swirly white amp-noises give you…. We definitely were a bit self-conscious, we were once afraid to do something bold. Now when we’re together in the studio we don’t worry about those things. In fact, we don’t worry about anything at all…”