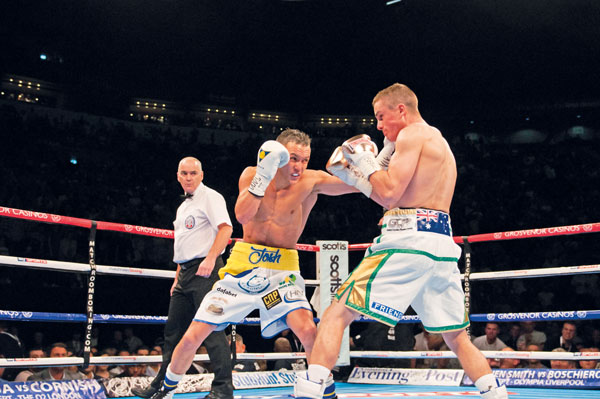 OUR EXCLUSIVE INTERVIEW WITH THE ‘LEEDS WARRIOR’ JOSH WARRINGTON

Leeds boxer Josh Warrington has put our city firmly on the map of the boxing world. At the First Direct Arena where he recently dominated opponent Joel Brunker, the atmosphere was electric with the volume of support from the 12,000 strong crowd off the Richter scale. I’m sure no other boxer has ever had such a passionate following before, and as each win in his 22-0 professional career brings him one step closer to a World Title fight, the ‘Warrior fever’ keeps on growing! I spoke to Josh about growing up in Leeds, his boxing career, and his extremely loud fans.

Growing up in east Leeds, Josh attended Victoria Primary School then moved on to John Smeaton High School. He started attending boxing classes at the age of 7. He recalls “I tried boxing because I had tried everything else and was rubbish! I had a go at rugby, football, karate. I liked them but I just didn’t do well at any of them. My Dad had always been into boxing and thought maybe I could have a go at that. He took me to the Star club at the Irish Centre.” Surely with the talent Josh shows in the ring now his childhood trainer could see something special? Josh tells me otherwise “I was always energetic and wanted to fight but no, I was not naturally good at boxing. But I kept at it and had my first amateur fight aged 11.”

Many youngsters give up their hobbies as they hit their teens and get bored or find they just want to hang around with their friends. I asked Josh if this was ever a problem for him “There were a lot of distractions – I remember just wanting to watch TV! But my Dad always said to me ‘don’t ever ½ do something, either do it or don’t’, I kept at it and by the age of 13-14 I disciplined myself. I always put boxing first and it was around this age that I started to realise I could do something. As I got older, boxing kept me focussed on my health and my fitness, so I missed out on a few lads nights out because of that. I knew by then what I wanted and that takes determination and dedication". Even though Josh was dedicated to his boxing, he concentrated on his education too. He always dreamed of becoming a PE teacher, but in the end qualified as a dental technician. This has led to a saying which, according to Josh if he had £1 for every time someone said it he would be a very rich man – ‘He fixes teeth by day, and knocks them out by night.’

So when did he make the decision to turn professional? Josh says “The Olympics never interested me. Around the age of 16 I won a couple of amateur nationals, then I started getting called to spar with pro boxers and realised I could hold my own with them. The idea of turning pro scared me at first but by the age of 18 I knew I was going to do it.”

Since that time he has never looked back, holding five titles so far in his pro career – the English, British, Commonwealth, European and the WBC International featherweight belts. I have met Josh on two separate occasions so far. Speaking to me before his fight against Joel Brunker where he was defending both his Commonwealth and WBC International belts Josh was circumspect about the upcoming bout “Joel is a tough opponent and world renowned. Some people are thinking I may be out of my depth with this one but no fight is an easy fight. I have worked hard to keep my record intact and not be beaten. Also, I have got a big fan base and I don’t want to let them down. This all means that it is the biggest fight every time I fight.” Of course, we all watched Josh clearly dominate the fight on September 5th and win every single round unanimously. He tells me now “The fight went easier than I expected. That is no disrespect to my opponent, I kept my focus and that helped massively. The crowds certainly helped too. It is an intimidating atmosphere for any opponent, and anything which knocks them off their game plan helps me. They spur me on too. Knowing that all these people have spent their hard earned money on a ticket I don’t want to let them down. I am so proud to be from Leeds, and the support I get from the people of this city is more than I could have ever dreamt of.”

Josh continues “That last fight was important and showed that I am world title ready. I think there will be another couple of fights though before a World Title shot. I know that people want to see me face Lee Selby but he is contracted to defend his belt in the USA a couple of times before that will happen. I’m not going to wait around, I need to think about myself and my own career.”

Josh doesn’t only think of himself though –  at our meeting at Precise Accurate Training, his co- trainer Nick Manners’ gym, he surprised all the kids during their class. Their faces lit up as they realised who had walked in and were beaming from ear to ear as they excitedly handled three of his belts. He happily answered their questions, posed for photographs and encouraged them to keep going and be the best they can be. Josh also does as much as he can for charity within the city, he signed a glove that evening that will be auctioned off to raise funds for a local boy living with spina bifida. Commenting on the visit, Josh says “I think it is brilliant to see youngsters getting in the gym and taking up boxing. They are the future of boxing in Leeds and it’s fantastic that I can support and encourage them.” He also tells me that he is really happy to have Nick Manners in his corner. “Nick is a real character! In this game you never stop learning and to have Nick who has been pro himself come on board the team is great. He is hungry, and has brought new ideas, and a new pair of eyes to the table! I really enjoy working with him.”

Nick Manners says “Having formerly been a professional boxer myself, although not quite reaching National Champion status, I fully appreciate the hard work and dedication needed to achieve such lofty heights. I freely admit I wasn’t prepared to sacrifice or dedicate myself to such an arduous task – not everybody has it within themselves to commit to such a hard sport as boxing. Josh Warrington is a perfect example to anybody (especially the kids) that hard work, dedication and perseverance does have its rewards. Working alongside Josh and the rest of our team is testament to the mural on our gym wall ‘If you believe, you can achieve’. The children in the areas that I personally come into contact with throughout Leeds have certainly been inspired by Josh’s story and his rise, and most certainly by the way he conducts himself.”

Josh Warrington’s future is certainly looking bright. He is flying the flag high for sport in Leeds and is an excellent role model to the next generation. The Yorkshire Reporter, along with the rest of Leeds are right behind you Josh!

Go to our competitions page to be in with a chance of winning a signed photo of Josh.