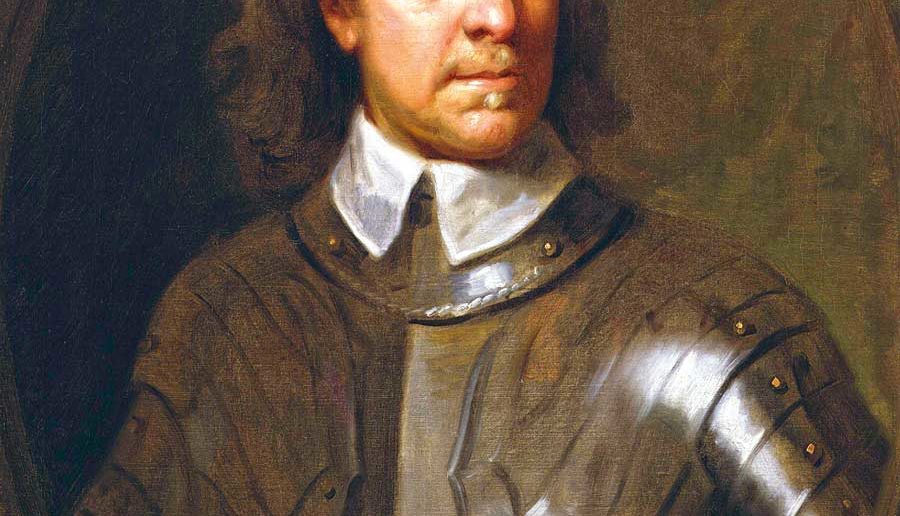 His name is remembered in Leeds by addresses such as Cromwell Street, Cromwell Mount, also Naseby Grange, Naseby Garth and Naseby Terrace dedicated to the battle and parliamentary victory against the forces of king Charles I in 1645 at Naseby in Northamptonshire.

Oliver Cromwell was to become a powerful leader, from farmer to soldier, statesman and eventually Lord Protector in the years after the king had been executed on a charge of treason against his own people.

Oliver Cromwell was born in Huntingdon, Cambridgeshire on April 25th, 1599, the only son of Robert Cromwell a one-time member of parliament during the reign of Elizabeth I, and his wife Elizabeth Steward. Oliver became a pupil at Huntingdon Grammar School and was said to be a ‘wild’ youth getting into trouble several times. On one occasion he was flogged by the headmaster Dr Beard. This wasn’t for some boyish prank, but for saying he had a vision that one day he would be the greatest man in England. Dr Beard no doubt thought that a good thrashing would bring him to his senses, obviously not knowing that the prophecy would come true one day.

From Huntingdon Grammar School, Cromwell went to Cambridge University, and later became a member of parliament. For some years he commuted from Cambridge to London to pursue a political life there, also enjoying a life in the Cambridge countryside. During time spent in Cambridge he quarrelled with the mayor of Huntingdon and decided to sell his farm and move some five miles away to St Ives.

Oliver Cromwell grew up during the long quarrel between an elected parliament whose desire was to govern the nation without hindrance from the monarchy, in this case, Charles I. The differences became so bitter that it could only be solved by war between the two sides, the king and parliament, and on the 22nd of August 1642 the king declared war on his own people by raising his standard at Nottingham, opening the military phase.

The early summer of 1643 saw the king’s side gaining ground and seemingly in control of Yorkshire after their victory at Adwalton Moor near Drighlington. A year later however, things changed after the royalists were besieged in York by three of the Roundhead armies one of which was under the command of Sir Thomas Fairfax and his second in command, Oliver Cromwell.

It was now that Cromwell began to prove himself a born soldier rising quickly to the position of supreme commander of the armed forces. He showed himself to be master of all the arts of warfare, and here in Yorkshire victorious at the battle of Marston Moor which would be the decisive battle of the civil war and the fall of the monarchy. Cromwell however didn’t escape injury at Marston Moor, he was wounded by a pistol ball grazing his neck and the flash of the shot temporarily blinded him.

Within a few years, it was all over for the king and he was put on trial by the victorious parliamentary forces. He was found guilty and the court President, John Bradshaw read out the sentence:

“…. that the said Charles Stuart, as a Tyrant, Traitor, and

Murderer and public enemy shall be put to death by the

severing of his head from his body.”

On the 30th of January 1649, the king was taken to the scaffold specially erected for the occasion and the sentence was carried out and the ‘office’ of king was abolished.

In the few years before Cromwell became Lord Protector, there was dissatisfaction in the country with the way parliament performed its business. On April 20th, 1653 Oliver Cromwell entered parliament with thirty musketeers. He sat listening to the debates for a time and then rose to his feet and after speaking angrily he called for the waiting army to remove all the members:

“You have sat here for too long for the good

In his anger, he also called for the removal of the mace or ‘bauble’ as he described it.

He continued to berate them as they departed with the ‘help’ of the army and told four members that one was a ‘whoremaster,’ one a ‘thief,’ one an ‘adulterer’ and another a ‘drunkard’. He didn’t hold back his feelings. When the house was empty, he locked the door and left. Three years later, there was a move to offer him the crown as king, but he refused knowing full well that this would make him vulnerable and he wisely remained Lord Protector until his death in 1658.

Although Cromwell had fought to get rid of corruption in Great Britain with the abolition of the monarchy, and eviction of members of parliament, he was not without controversy himself. As a Puritan, his regime was harsh, particularly towards Roman Catholics – which most Irish citizens were. He confiscated much of their lands and some historians refer to him as genocidal towards them. The strict regime he enforced after taking power was too harsh for many living under his rule. Women had strict rules of dress to follow and his dislike of what he believed to be the extravagance and immorality of Christmas celebrations, along with the belief that it was an unwelcome survival of the Roman Catholic faith, led to him almost certainly supporting parliament’s decision to abolish the festival.

At the restoration of the monarchy with Charles II in 1660, Cromwell’s corpse along with Henry Ireton, Cromwell’s son-in-law, and John Bradshaw’s were ripped from their resting places in Westminster Abbey and hung at Tyburn. Several tales emerged over the years as to what happened to Cromwell’s remains. One of the most popular is that of his daughter Mary, later Countess of Fauconberg rescued what was left of his remains and brought them to be buried in Newburgh Priory at Coxwold, North Yorkshire. His remains are said to be sealed in a tomb, minus his head which is interred in Sidney Sussex College, Cambridge in a secret location.

To this day, the tomb has not been opened, and even the Prince of Wales later King Edward VII wasn’t allowed to open it and the question remains, is the corpse there, or not? Maybe one day we’ll find out. Either way, people today remain divided as to whether he was one of the greatest leaders of our history, or a power-hungry military dictator.