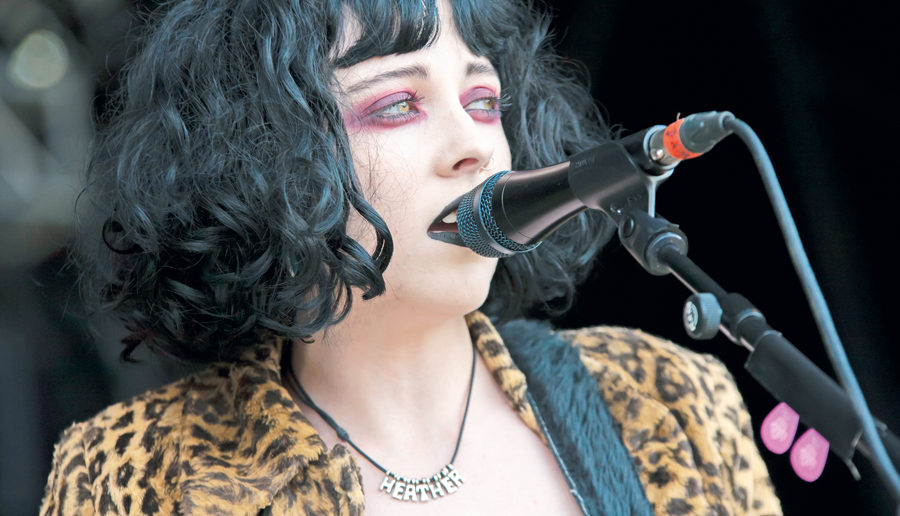 The festival season is over and traditionally last month saw a swathe of new records. Foo Fighters, Taylor Swift, Lorde, Sam Smith and Gary Numan all released new records. The splendid new album, released recently by Dirty Hit, from Wolf Alice: one of the biggest breakthrough bands of recent years, made their eagerly anticipated return, with VISIONS OF A LIFE, and a run of shows worldwide including a UK and European tour this autumn. As comebacks go, a gauntlet is hurled by the exhilarating rage rush of YUK FOO, briskly laying waste to all it meets in a little over two minutes. VISIONS OF A LIFE is fundamentally a personal album, and one of great growth for the band. From the opening HEAVENWARD – a cloudburst of shoegazey guitar and vaulting vocals – through to the epic eight-minute closing title track, it’s an album packed with surprises for those who think they know what WOLF ALICE is. However, the most eagerly awaited is Evanescence SYNTHESIS, their fourth and most ambitious album to date, set for a November 10th release. The album features a reworking of some of EVANESCENCE’s best-loved songs recorded with a full orchestra and electronica combined with the band and Amy Lee’s virtuoso piano and voice. The result is simply breath-taking.

And here’s the final word on the Festival season. The BBC Introducing stage at Leeds may have brought us Ed Sheeran but we prefer to remember it introducing us to Mercury Award Nominees The Big Moon, who were on the stage in 2014 and Muncie Girls who were there in 2016. Both played bigger stages at the festival in 2017 and who knows both may be promoted to the main stage just like Honeyblood this year. The point is BBC Introducing works and here are the three that we think one day will grace bigger stages with massive support.

Anna Straker began her career singing backing vocals on chart topping singles and albums by the likes of Rudimental, John Newman, Years and Years and Fono. Determined and ambitious, it wasn’t long before she began to fully immerse herself in her own music, leaving school at 17 and moving to London to pursue her solo career. Anna released her debut EP ‘Serious’ in November 2016 to huge critical acclaim from tastemakers such as Pigeons and Plans, Wonderland, Annie Mac and Huw Stephens. Anna’s live show illustrates what a talented multi-instrumentalist songwriter she is. Producing and writing her own music it’s easy to see why she is tipped as being one of the most exciting young talents to emerge from 2017.

Pale Waves the Manchester four-piece are the latest signing to Dirty Hit Records and have recently played sold out shows across the UK on the inaugural Dirty Hit tour alongside Superfood and King Nun. The band have now headed out as special guests on The 1975 North American tour, taking in 31 dates throughout April, May and into June, including Austin, San Diego, Los Angeles, San Francisco, Seattle, Denver, Detroit, Montreal, Niagara Falls and a show at the iconic Madison Square Gardens in New York. Following their incredible, highly acclaimed performances on the BBC Introducing Stage at the Reading and Leeds Festivals, PALE WAVES have announced their new single TELEVISION ROMANCE. TELEVISION ROMANCE is with the band’s previous single, THERE’S A HONEY, an AA side. To coincide with the single, PALE WAVES have announced a full UK and European tour this month and November. UK dates:  They are immediate and write incredibly catchy songs of teen angst. Go see them!!!!! ■ Will Sin For Love

We profess that we know nothing about the band Will Sin For Love except that they have a Facebook page, a twitter account and have been Radio 1’s Huw Stephens artist of the week and Tom Robinson plays them to death! We think they are from Portsmouth originally but are now London based. Oh, and we know one other thing! They sound incredible: sprawling landscapes of darkness, despair and desire that simply hypnotise you.