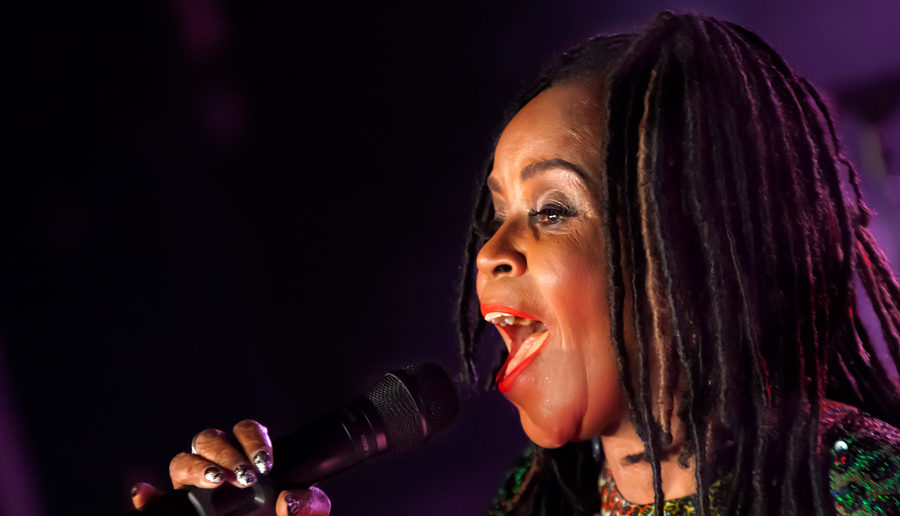 One thing that Leeds can lay claim to in terms of its thriving music scene is its diversity. Where else could you see in three nights a legend from the sixties? A much coveted and praised new British band producing the coolest funkiest pop in the country and a band who have established themselves as one of the best bands in the country? Add to this supports that have fought the trauma of the Manchester bombing and one band that are destined to be stadium fillers and have produced probably the most beautiful song of the year that is currently the most played record on American radio and you can see why Leeds is the place to be.

Where best to start than maybe the legendary PP Arnold who to coincide with her forthcoming album, The Turning Tide played a rare live performance at The Wardrobe.  PP has celebrated her 50-year anniversary as a performing artist and she’s still going as strong as ever. To coincide with the album, she has published her autobiography, THE FIRST CUT IS THE DEEPEST. And there were many anecdotes during her performance. There are not many performers who can reference Mick Jagger, Barry Gibb and David Bowie but the main thing is PP still has a voice that absolutely sends shivers down your spine. Most of the hits were here but some of the new songs from her new record are just as endearing too. 17-year-old Carys Crow supported her. Carys was in the crowd at the Manchester bombing and was so traumatised she was unable to continue with her blossoming singing career. Thankfully, and with much bravery, Carys has found the courage to start again. Quite a voice she has too.

Led by striking front woman Natti Shiner, Fickle Friends have spent the last 18 months releasing a string of brilliant singles including ‘Swim’, ‘Brooklyn’ and the most recent Radio 1 playlisted ‘Hello Hello’. They have now amassed over 15 million streams on Spotify and claimed high praise from fans and critics in all corners. Fickle Friends also continue to ascend with their live show. Following a massive sold out headline show at London’s Heaven at the end of 2016, the band are now on their biggest ever headline show. Fickle Friends have had a spring and summer packed full of festivals, headline shows and support tours to focus on. Thus, The Wardrobe was again full as they showed why they are in such demand. A perfectly crafted performance of their glittering pop gems.

London Grammar burst onto the UK music scene in 2013. They would go on to sell over two million copies of their debut album, If You Wait. And, in the process, Hannah Reid (vocals), Dan Rothman (guitars) and Dot Major (drums, electronics) collected an Ivor Novello, two AIM Awards, a Brit nomination and the iTunes’ Album Of The Year honour. From a standing start – three students at Nottingham University get together, muck around writing and playing, discover they have an alchemical gift for melodic and sonic gold; play pub gig in Camden in December 2010; sign to Ministry Of Sound; record DIY album in Rothman’s family’s garage – London Grammar and their music took off at bewildering speed. The trio’s intoxicating mix of soulful electronics, techno-folk and Reid’s stop-you-in-your-tracks vocals was bewitching on record, and stunning on stage. They absolutely held a sold out O2 Academy crowd for near on two hours. Lo Moon are a Los Angeles-based band – comprised of Matt Lowell (vocals/guitar), Crisanta Baker (bass/keyboards), and Sam Stewart (guitar) – whose sound meets at the intersection of artists like the XX and Talk Talk among others. The band is already becoming one of the most talked-about new artists to emerge from Los Angeles’ burgeoning indie scene. Known for delivering enticing and atmospheric soundscapes comprising ethereal guitar work, yearning lyrics, and resonant synths. The group first appeared on the scene in the latter half of 2016 with their first single, “Loveless.”, which is a seven-minute epic that sprawls and transcends light and dark, both lyrically and aurally. After putting out the song online, it began to garner widespread attention, as it did when they climaxed their London Grammar support slot with the song and it simply took the breath away. Possibly the highlight of three splendid nights in Leeds.