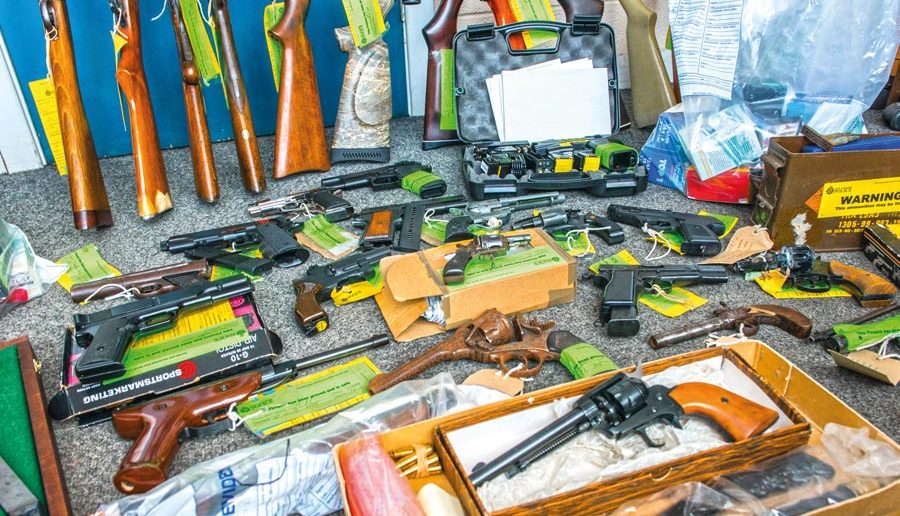 NINETY FIREARMS INCLUDING SHOTGUNS AND A RIFLE SURRENDED TO POLICE

Guns and ammunition were handed in during West Yorkshire Police’s firearms surrender.

Ninety firearms were surrendered between Saturday 20 July and Sunday 4 August, alongside large quantities of ammunition including 1500 shotgun cartridges.

Weapons handed in included 31 ‘live’ firearms including 21 handguns, eight shotguns, a taser and a rifle.

The surrender, which was held nationally in police forces across England and Wales and supported by West Yorkshire Police, gave people the opportunity to hand in firearms without the fear of prosecution for possessing them.

“This surrender was part of the ongoing work to reduce this type of crime, which also includes having dedicated resources to investigate firearms discharges and using gang injunctions to target those individuals caught up in the cycle of organised criminality which often includes the use of and access to illegal firearms.

“Other proactive work is being carried out to stop people getting involved in such criminality including early intervention in schools – the Get Safe ‘N’ Away gang intervention programme has already been delivered to 3,000 young people across West Yorkshire and our work with St Giles Trust to identify people on the cusp of serious criminality who could benefit from a peer advisor programme to avoid a life of crime.”

Mark Burns-Williamson, West Yorkshire’s Police and Crime Commissioner (PCC), said: “This surrender has seen a good amount of firearms and ammunition removed from the streets of West Yorkshire which undoubtedly means we are all safer.

“Tackling serious violence continues to be a priority which this latest surrender is part of, along with the on-going robust law enforcement activity of Operation Jemlock.

“In addition to the surrender and proactive policing operations, my office is working with a range of partners to implement prevention and early intervention initiatives, including a Violence Reduction Unit, ensuring we are providing positive alternatives to people who are vulnerable to being drawn into a world of violence and serious crime which we know can end with devastating consequences for individuals, families and communities.”