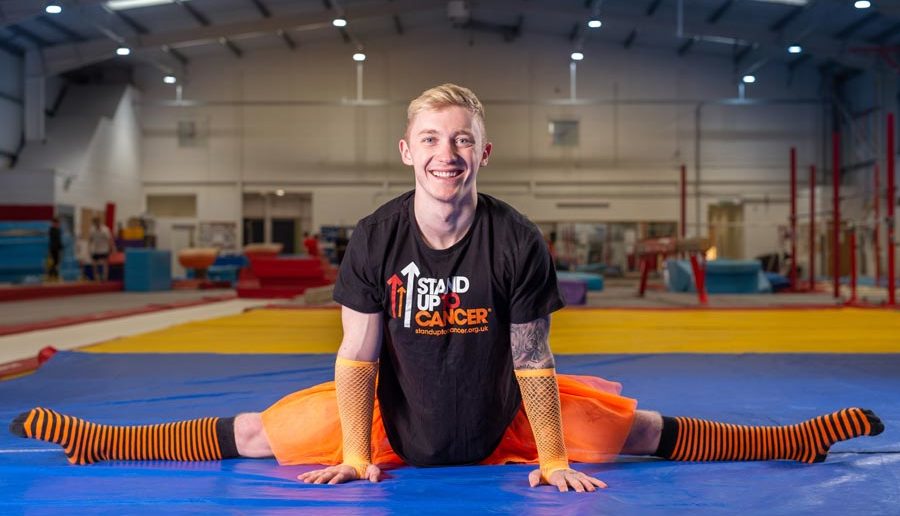 Olympic and Commonwealth gymnast Nile Wilson is making a stand against cancer – swapping his gym kit for an orange tutu and orange and black stripy socks. He’s encouraging people to dress up and raise money this October for Stand Up To Cancer, a joint fundraising campaign from Cancer Research UK and Channel 4.
Charity

NILE’S ‘GYMTASTIC’ PERFORMANCE FOR STAND UP TO CANCER

By yorkshire reporter on 22/10/2019 0 Comments
Olympic and Commonwealth gymnast Nile Wilson is making a stand against cancer – swapping his gym kit for an orange tutu and orange and black stripy socks. He’s encouraging people to dress up and raise money this October for Stand Up To Cancer, a joint fundraising campaign from Cancer Research UK and Channel 4.

Leeds Olympic and Commonwealth medallist, Nile Wilson, swapped his usual GB Team kit for an orange tutu and orange and black stripy socks before heading for the apparatus this week.

The world-class gymnast from Pudsey took time out from his usual training session at Leeds Gymnastics Centre to highlight Stand Up To Cancer, a joint fundraising campaign from Cancer Research UK and Channel 4.

Nile, 23, who is recovering from an injury which meant he missed the 2019 Artistic Gymnastics World Championships in Germany this month, somersaulted in to encourage everyone to dress up in a funny, unusual or unpredictable way to raise money for research.

And even while wearing his special Stand Up To Cancer themed outfit, he was still able to do the splits, twist, flip, tuck and stand tall, embracing the challenge with flair. Stand Up To Cancer unites scientists, celebrities and communities across the UK, raising money to take developments from the lab and transform them, quickly, into brand new tests and treatments.

The campaign is also supported by a host of other stars including Davina McCall, Alan Carr, Maya Jama, Greg Rutherford and Joe Lycett.

By sharing his experience, Nile hopes to motivate everyone in Yorkshire to get involved in Stand Up To Cancer’s fundraising this October.

A free fundraising pack is available full of ideas on how to raise some cancer crushing cash at work, home or school.

Like most of us, Nile knows people who have been affected by cancer.  He said:  “I’ve been lucky that so far cancer hasn’t directly affected my family, but many of our friends and their families have had to face it and I have seen how devastating it can be.

“I might be injured at the moment, but I know my pain can’t compare to what some people with cancer will be facing.  I know that with hard work and training I should to be back on the GB gymnastics team at the Tokyo Olympics next year. It’s thanks to research, some of which take place right here in Leeds, that more and more people are still standing and can look forward to taking back control of their own futures. That’s why I’m supporting this vitally important campaign.” Around 3 people are diagnosed with cancer every hour in the Yorkshire and The Humber. By joining Stand Up To Cancer, supporters in the region will be uniting with doctors, nurses, scientists and celebrities to generate funds, raise awareness and accelerate life-saving research.

They can choose to fundraise in their own way or pick from ideas in the fundraising pack.

These include an ‘unpredictable dress up’ challenge like Nile’s, hosting a ‘crafts and laughs’ evening for a donation, or a or two-week fitness challenge.

And for those who want to take on cancer in style, there’s also a striking range of Stand Up To Cancer clothing and accessories available online.

Nicki Embleton, Cancer Research UK’s spokesperson for Yorkshire, said: “We are very grateful to Nile for being such a good sport and helping to raise awareness with such acrobatic ability and flare. There’s been amazing progress in the past few decades and more people are now surviving cancer than ever before. But with one in two of us in the UK set to develop the disease at some point in our lives, there’s still so much more to do.

Since it was launched in the UK in 2012, Stand Up To Cancer has raised over £62 million to fund 52 pioneering clinical trials and research projects.

Right now, scientists are developing new tactics to boost the immune system’s ability to take out cancer cells. They’re creating cutting-edge technologies to detect cancer cells in the blood, which could transform the way cancer is diagnosed. And they’re using MRI to turn radiotherapy into a more precise, personalised and powerful anti-cancer weapon.

This autumn will see a dedicated season of programming for Stand Up To Cancer on Channel 4.

To get involved visit su2c.org.uk