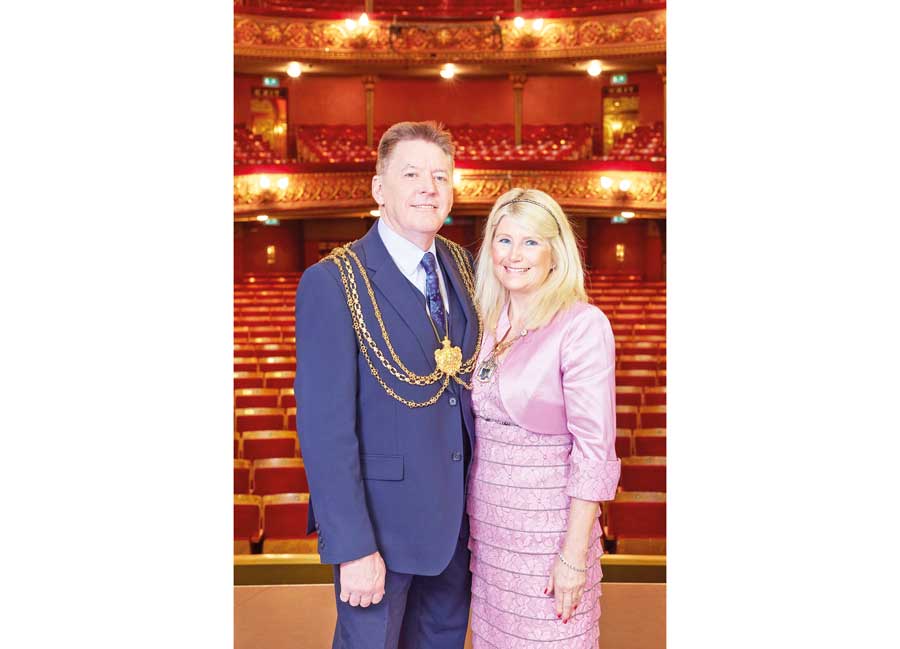 Councillor Gerry Harper is the new Lord Mayor of Leeds, following unanimous support from members of all parties at the council’s annual meeting held recently.Cllr Harper is the 123rd person to be given the honour of holding the prestigious office. Accompanying Cllr Harper on his wide-ranging engagements during 2016/2017 will be the Lady Mayoress, Miss Lynne Scholes.
Born in Belfast, Gerry moved with his family to the Harehills area of Leeds in 1967, and currently lives in Otley. Gerry began his working life in the city’s historic Leeds Kirkgate Market, before taking positions at Montague Burton in Leeds and Archbold Storage Ltd, Gildersome. In 1978 he trained as a central heating surveyor at British Gas in Wortley, and remained in the job until he was elected as a Labour councillor in the then University ward of the city in 1994.
Having represented University ward from 1994 until 2004, Cllr Harper is currently a councillor in Hyde Park & Woodhouse ward following re-election in 2010. During his time as a councillor, Cllr Harper has assumed a number of roles and responsibilities. These include executive board member for environment and cleansing, deputy executive board member for regeneration, transport and planning and chair of Leeds Markets board.
Away from civic life, Gerry is an avid Leeds United and Leeds Rhinos fan and also enjoys running, tennis, swimming and cycling.
During his time as Lord Mayor, Cllr Harper will be raising money for two charities. Those to receive the support of the Lord Mayor this year will be Epilepsy Action and Heart Research UK.
The Lord Mayor of Leeds, Councillor Gerry Harper said:
“It is an unbelievable honour and privilege to be elected as the new Lord Mayor of Leeds. Having arrived in Leeds from Belfast with my family as a young boy, I never imagined that one day I would have the opportunity to represent our truly amazing city in such a way.
“Both I and the Lady Mayoress cannot wait for our engagements to start so we can begin to meet the fantastic people of our city. This year my chosen charities are Epilepsy Action and Heart Research UK, and we are really looking forward to increasing awareness about both conditions, whilst hopefully raising a significant amount to support the brilliant work that they do.”
Barbara Harpham, Heart Research UK national director, said:
“We’re looking forward to a great year with the Lord Mayor of Leeds as one of his chosen charities. Whatever is raised through the year will be spent in Leeds.
“We are very proud to be a Leeds charity. We were founded by a Leeds heart surgeon nearly 50 years ago to make surgery safer and we’re looking forward to celebrating all our achievements with the Lord Mayor in 2017. In the last 15 years we have spent over £2.3m on research at universities and hospitals in Leeds, and a further £25,000 on community healthy heart grants helping people to live healthier, happier and longer lives.”
Philip Lee, Epilepsy Action chief executive, said:
“Epilepsy Action is thrilled to have been chosen as one of the Lord Mayor’s charities as he begins his new term in office. As someone personally affected by the condition, the Lord Mayor will understand just how important it is to support the 600,000 people in the UK who have epilepsy. It can be an isolating and frightening condition which impacts the lives of people with epilepsy and their loved ones in so many ways.
“This is why it’s so important to provide people with the right information and support when they need it most, whether it be through services such as our helpline or a local coffee and chat group. We are delighted to have the Lord Mayor on board to raise vital awareness and funds and look forward to working with him over the next year.”