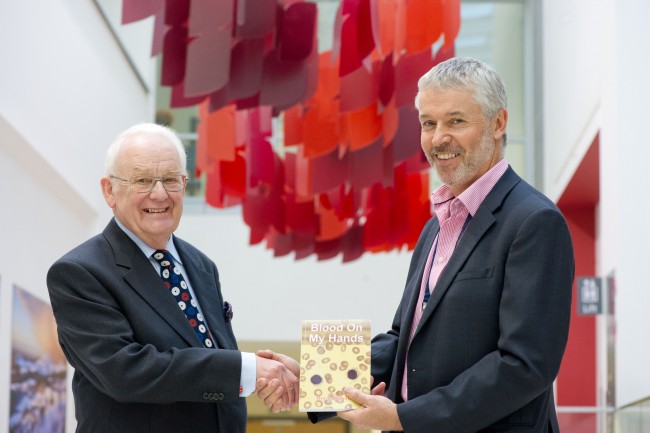 The history of haematology in Leeds and the characters and politics behind the scenes at Leeds General Infirmary witnessed during a career of over 40 years have been brought to life in a newly-published book by a former consultant.

Dr Bryon Roberts, who retired as Head of the Institute of Pathology at LGI 16 years ago, has penned the personal memoir called “Blood On My Hands: A Haematological Odyssey”. All proceeds from the book will help raise money for the Friends of the Leukaemia, Lymphoma and Myeloma Unit.

Dr Roberts, who now lives in Roundhay, first came to the Leeds Medical School in 1951, when Leeds was a drab, soot-blackened city where food and clothes rationing had only just ended. The National Health Service was almost brand new but even in those early years the service was struggling for money.

The book brings to life many of the characters Dr Roberts encountered during his training at the Infirmary, particularly the formidable consultants whose gleaming Rolls-Royces were in stark contrast to the austerity at large in Leeds as a whole.

Haematology, the study of blood disorders, was still in its relative infancy at the time Dr Roberts became a registrar in pathology, and the book charts its rise to prominence and the characters who made that possible as well as some key technological developments.

Also tied up with the story is the development of the Infirmary itself, the thwarted plans to knock down the entire building and redevelop it, and the compromise which created the Clarendon Wing.

He takes the story through to the mid-1990s, when he was Director of the recently created Institute of Pathology, and also tells the story of the Friends of the Leukaemia, Lymphoma and Myeloma Unit and the fantastic fundraising they have undertaken over the years.

“I was originally encouraged to write a history of haematology in the city by the department itself, and my initial reaction when I came to consider writing the book was one of slight embarrassment,” Dr Roberts said.

“However, as I got more involved in the planning I realised how few of the people I worked with in those early days were still around and that it was important to write down my memories so they could form a historical record.

“I was originally going to concentrate simply on haematology but I realised the story of its development was tied up with the wider story of the LGI and the people who worked there as well as giving an insight into the first years of the NHS which I hope the general reader will find of interest.”

The book is already on sale on Amazon but locally it can be ordered at a cost of £10 with £5 going to the Friends of the Leukaemia, Lymphoma and Myeloma Unit. To order a copy please email sheila.day@leedsth.nhs.uk or gill.needham@leedsth.nhs.uk .