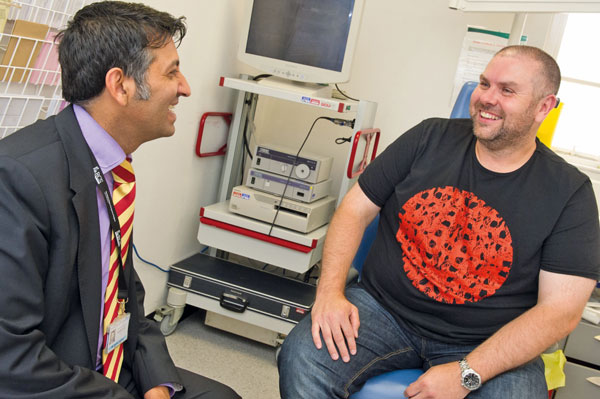 A Leeds man has become the first in the city to be fitted with a new type of implanted hearing aid (the Cochlear Attract) which includes a magnet placed under the patient’s skin, greatly improving its usability and cosmetic appearance.

The first patient to have the implantable magnetic device is 41-year-old Chris Hatton, a draughtsman from Pudsey. He became deaf in one ear after contracting mumps eight years ago, and lived with this disability for some years, unaware that there were any options to help with his hearing loss.  He only became aware of this hearing technology after he sought a medical reviewfor headaches that he was suffering.

Chris was assessed as a suitable candidate by Rachel Berry, specialist audiologist, for the newly available technology, in which there is a magnetic connection providing an invisible link between the sound processor and the implant.

Externally, Chris wears a “soft pad” attached to the BAHA 5 sound processor, which sits discreetly behind his ear.

Inside his head, a small titanium implant was inserted by a small operation into the bone behind the ear. Sound is picked up and transmitted as vibrations from the external sound processor via the magnet to the implant, which then directs them through the bone of the skull to stimulate the inner ear, allowing Chris to hear.

The wireless device uses the latest technology and automatically senses and adapts to different ambient sound conditions such as wind and traffic noise, music and conversation, and links through his iPhone app.  It can be fine-tuned to meet Chris’s specific needs.

Mr Sanjay Verma, Consultant Ear, Nose and Throat surgeon at Leeds Teaching Hospitals, implanted the device in an operation which took around 40 minutes, and Chris was able to go home the same day.

Mr Verma explained: “With the previous type of bone anchored hearing device (BAHA) patients needed to take particular care to avoid the connection through the skin becoming infected.  With the Attract device, having a magnet in place under the skin with the overlying skin intact does away with that risk, and is cosmetically more acceptable to patients.  The external sound processing device is held securely by the magnetic link but can be removed and put back extremely easily.

“It also does away with the need to attend multiple aftercare clinics so the number of follow-up visits are kept to a minimum, which is much more convenient for the patient and cuts down the costs for the NHS.”

From his perspective, Chris can now hear from his left side again and no longer gets the migraines he used to suffer from.  He is delighted at the interest friends and family have shown in the device.  “It has a kind of sci-fi look and I get lots of questions about it.  People are always amazed that something so small actually works and restores my hearing,” he said

“I can do things which I previously couldn’t do and I often find I forget I am wearing it. It was easy and convenient to implant and I’m delighted to be the first patient in Leeds to have this new technology. I would definitely recommend it to people in a similar position to me who would benefit.”

The device used is known as the BAHA Attract system manufactured by a company called Cochlear.