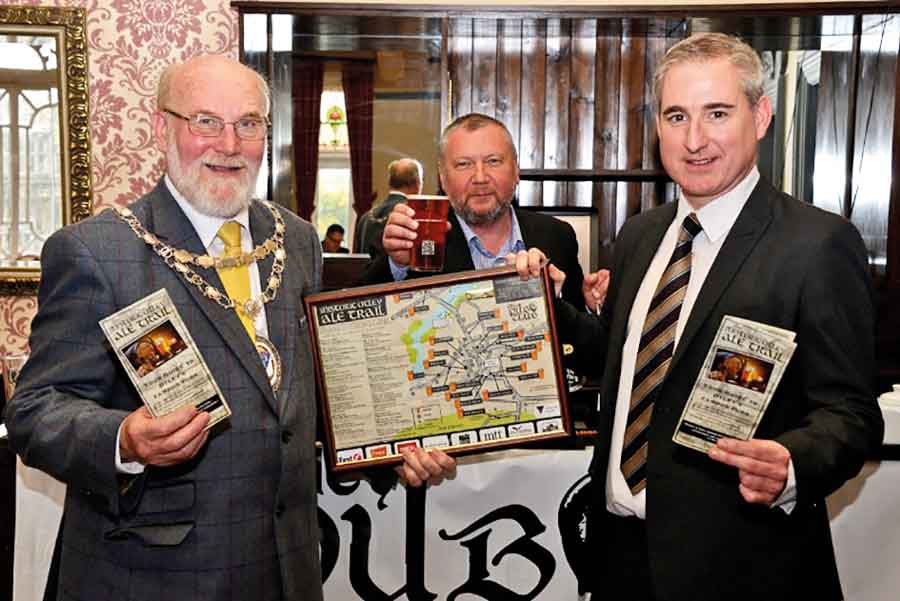 A highly popular publication about the famous pubs of a West Yorkshire town has been updated and launched because there are more, not fewer, pubs in the town than there were in 2013 when it was first published.
The Historic Otley Ale Trail guide, published by Otley Pub Club, lists 20 pubs as against 18 three years ago. In addition, at least six pubs have undergone major refurbishment in that time. The publication is free and distributed through all the town’s pubs and tourist information centres across the region.
The official launch of the new version was held on Thursday October 14 at the Black Horse Hotel and attended by the Mayor of Otley, Councillor Ian Jackson, civic and business leaders, sponsors and members of Otley Pub Club.
Commenting at the launch, Otley Pub Club chairman, Andy FitzGerald said, “It is great news that we have been able to launch a new Ale Trail guide which includes more pubs than three years ago. On behalf of the Club and all the town’s pubs I wish to thank our Otley Town Council, today’s hosts First Bus and all our sponsors whose support has enabled us to publish the updated guide. We believe it is a valuable addition to the town’s marketing efforts.”
Greg Mulholland, the local MP and president of Otley Pub Club added: “I am delighted that Otley Pub Club has now published a second version of the Historic Otley Ale Trail, which remains unique in the UK as the only local pub guide that shows all the ‘lost’ pubs as well as the twenty pubs that happily still serve the town. It is fantastic that not only has Otley hung onto to its many historic pubs but it has two new ones and has seen significant investment in several pubs which is great for the local economy.
“Otley’s pub history is fascinating and the aim is to get this very attractive guide further afield to attract more people to come and visit Otley and its pubs and find out why Otley is a famous Yorkshire pub town!”.
The Historic Otley Ale Trail guide gives information about all 20 existing pubs some of which date back around 300 years. Several are reputed to be haunted and one was drunk dry by Cromwell’s troops on the eve of a crucial battle of the English Civil War. The guide also lists and identifies the location of 24 ‘lost’ pubs, inns and taverns that have come and gone over the centuries. Unusually three ’lost’ pubs are now banks.
Otley’s pubs are a haven for real ale fans. A survey conducted last year showed that at any one time over 30 different varieties of real ales are available on draught from over 20 Yorkshire breweries plus ales from across the country. The pubs are also renowned for the variety of live music available every week. Otley bucks the national trend of pub closures which are still running at the rate of 21 a week (CAMRA 2016).
Sponsors of the guide are Otley Town Council, First Bus, Punch Taverns, Thwaites Brewery, Wetherspoon, Enterprise Inns, Black Sheep Brewery, Market Town Taverns and Ilkley Brewery. Framed copies for display
in every pub are being provided with support from Browns Gallery.