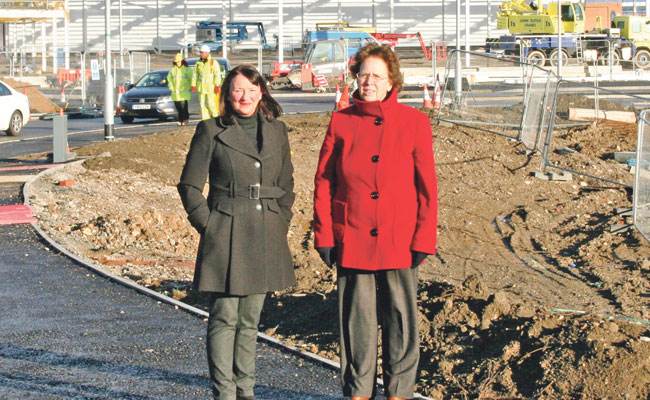 The main structure of the 36,000 sq ft Asda store is now being erected and changes to the road layout are underway. Councillors are looking forward to seeing the store open in May, which will include a petrol station, George clothing, 330 car parking spaces and create up to 375 jobs. Asda will work closely with the Council and Jobcentres to ensure the jobs are offered to long term unemployed people in the local area.

The Councillors were also excited to see that the Aldi store building was now complete. Work is now underway to install electrics and features in the store, which should be opened in March and will provide up to 30 new jobs.
Councillors Groves, Blake and Truswell have fought hard for the stores to be built in Middleton centre, which previously lacked any major supermarkets. They worked closely with the two companies, the Council’s Planning Officers and the community to ensure the stores would directly benefit the people of Middleton.

Recruitment is now underway for the Aldi store and vacancies for Asda will be publicised from this month onwards.
Councillor Kim Groves (Middleton Park) said:

“It was great to see how much progress has been made at both developments and we are really excited that the stores will be open soon. From the day Asda and Aldi received planning permission, local people have been eagerly awaiting the new jobs and shopping facilities they will provide. We will work to ensure the jobs are offered to local people to help us tackle long term unemployment in the area.

The new stores are just part of the wider development of Middleton which has included new housing and improvements at Middleton District Shopping Centre. To improve access we have secured extra pedestrian crossings and we are also discussing improvements to bus services in the area. We are sure the stores will become an integral part of the Belle Isle and Middleton community for many years to come.”