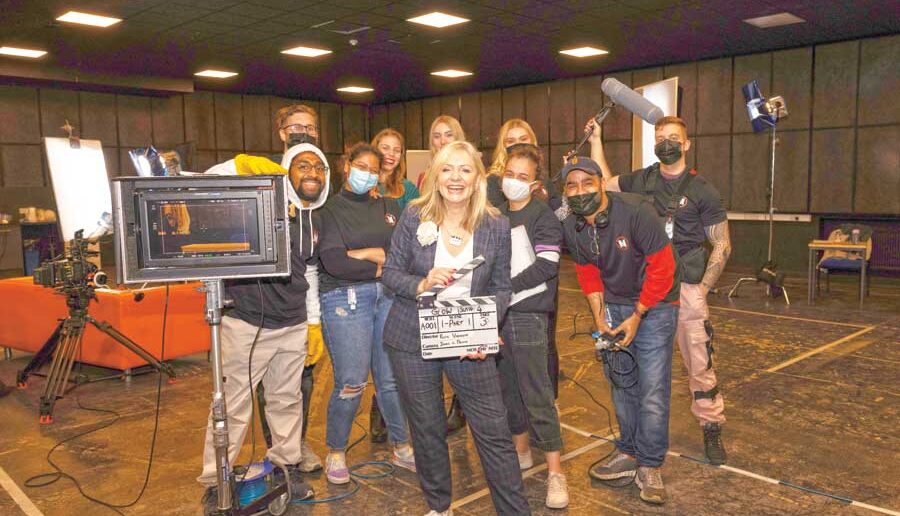 MetFilm School, one of the screen industry’s leading film schools has launched a new film school for the north of England.

A celebratory day was held to launch the new campus at their new location of Prime Studios in Leeds, with over 60 guests from across the film and TV industries in attendance.

visited the new campus today, she spoke to the audience and spent time with students, she  said: “These are really exciting times and MetFilm School will be a part of that – and that pipeline of talent is only going to help us.

“As a region we are a brain gain region, which often isn’t the situation for university cities – they’re often a brain drain. So we get people who haven’t come to university here but actually move here because of the quality of life, and set up their businesses here.

“I was at the Global Investment Summit only a couple of days ago talking to people selling the cultural offer as well as the quality of life here – people come here and train here and they stay. Because actually the quality of life is great and not just our glorious countryside, but it’s the bars the clubs the culture on offer, the city spaces, the park runs and lifestyle that I am certainly investing in, to make sure we keep those creatives here.

“I met Shane Meadows the other day who is shooting up here, (Director of This Is England) and I asked asked him where his crew was from, and he said all of them… all of them are from the north. So, it makes so much sense: we have the locations, we have the beauty, we have the will and the open arms to bring people here and we have to make sure we have the talent and the crew as well.

“It’s such an exciting time that C4 has been pivotal to so we are going to make sure that we keep them. So welcome to the family!”

MetFilm school has undertaken to invest over £6m over five years to bring a new campus to the north based in Yorkshire – Leeds.

Within three years the school will have more than 200 students, at maturity enrolling approximately 100 students per year> The school is offering five different graduate and masters’ degrees.

There is currently high consumer demand for content, this week streaming giant, Netflix revealed that it added 4.4 million users in the three months to 30 September, more than double the previous quarter.

With more demand the industry has seen a need for more skilled professionals to create and make this content, not just for Netflix but for production companies, streaming platforms, small and big screen world-wide.

“There are always a lot of series and films shooting in Yorkshire, and many more leading production companies shooting and based in Leeds, Manchester and Liverpool, so the three cities create a ‘northern circuit’ for filmmakers and actors.

“Working in the north of England is the same as working with creative, skilled professionals anywhere, the only difference is that film and series tend to have a different cultural identity depending on where they are set, a fresh perspective.

“I studied for my MA in Film Production in Leeds years ago and it’s a great city for students, friendly and small enough to walk around but with cool cafes and bars and an indie streak running through its music and arts scene.  Met Film School has a similar ethos that makes it a natural fit for Leeds.  Our emphasis on student centred learning taught in highly practical classes by a community of industry professionals is what I am proud to be part of as a tutor.

“I’ve always enjoyed directing in Leeds, most recently ‘Emmerdale‘ for ITV.  I’d previously directed ‘Coronation Street’ which is also a popular multi-camera series and shot in a similar way.”

“We are so proud to be launching MetFilm School Leeds. It has long been an ambition of the school to open a campus in a second UK city. Our strategic decision making since the school’s inception some eighteen years ago has been driven by a desire to make the unique education that we offer available to more people. That’s why we started running undergraduate programmes and later postgraduate programmes, and it’s why we opened in Berlin, Germany. And it is also why we are opening now in Leeds.

“Digital technologies in production and distribution, the subsequent emergence of the streamers, and the continued growth and support of the creative sector, have all made the film and TV sector across the UK ever hungrier for talented people in front and behind the camera. We are proud to do our bit in educating and supporting that talent and in turn in supporting the industry.

“We are already proud of our association with Yorkshire. In 2017 we helped produce the multiple award winning and BAFTA nominated film God’s Own Country. It is indeed no accident that Yorkshire has long been described as God’s Own Country, and its picturesque locations have made it a favourite haunt for artists and filmmakers.

“This is something that the industry is waking up to. Channel 4 moved its headquarters into Leeds a few weeks ago, joining ITV and BBC in having a permanent presence in the region, and a host of production companies have also made similar moves. When the industry grows, it needs space as well as talent, and the county is proud to boast several new studio developments.”