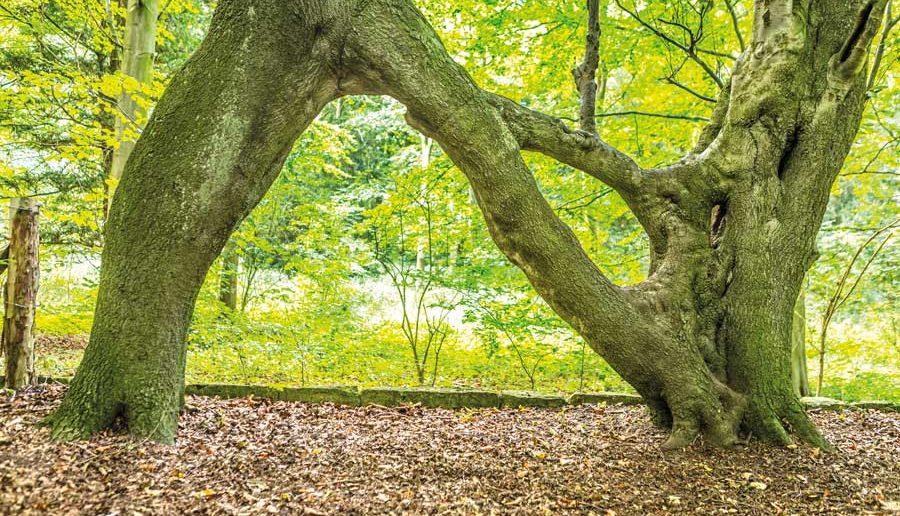 A beech tree created to woo a sweetheart 100 years ago that’s still a meeting place for lovers and a popular place to pop the question, has been crowned England’s Tree of the Year.

The public voted overwhelmingly to crown Nellie’s Tree in the Parlington Estate, Aberford, Leeds, its 2018 winner.

Nearly 100 years ago, Vic Stead would walk from his home in Garforth near Leeds, along the old colliery railway, to visit Nellie, the young lady he was courting who lived in the nearby village of Aberford. One day, he came across three beech saplings on his route, and grafted one sapling between the other two to form the letter N in an attempt to woo his sweetheart. It worked. Vic and Nellie would go on to marry and have a family, and although they are both gone now, Nellie’s tree, also known as the Love Tree by locals, still remains. It is still popular with lovers today and is the site of proposals.  The couple had children and grandchildren who chose to share their story. It was Vic and Nellie’s grandson Chris Lund who nominated the tree.

The winning trees for Wales, Northern Ireland and Scotland were also revealed live on the BBC’s The One Show.

Now in its fifth year the Woodland Trust’s  Tree of the Year contest aims to showcase the UK’s best trees to help drive up interest in their value and protection. The charity is now asking the public to whittle the four national winners down to ONE to represent the UK in February’s European Tree of the Year competition.

“There was a lot of love for this northern gem. Its popularity is rooted in a tale of romance and has really captured the public’s interest to poll the most votes. The UK’s trees could do with a bit more love. Since last year’s contest more trees have come down needlessly in our towns and cities and opportunities to save important trees from infrastructure plans such as HS2 have been denied.

“Now let’s see how we can fare in Europe!  Help us select the tree to take forward to the European Tree of the Year awards so we can join the chorus in Europe to demand better recognition for the important role of trees.”

The competition is supported by players of the People’s Postcode Lottery which awards a £1,000 care grant to the winning trees.

“The competition has turned up some fascinating trees with terrific stories. I am delighted that players of People’s Postcode Lottery have supported this celebration of the nation’s best loved trees.”

On announcing the four national winners, The One Show opened voting for the public to decide which of the four trees should represent the UK in the European contest which is run by the Environmental Partnership Association. Visit the One Show homepage to find out more and place your vote.