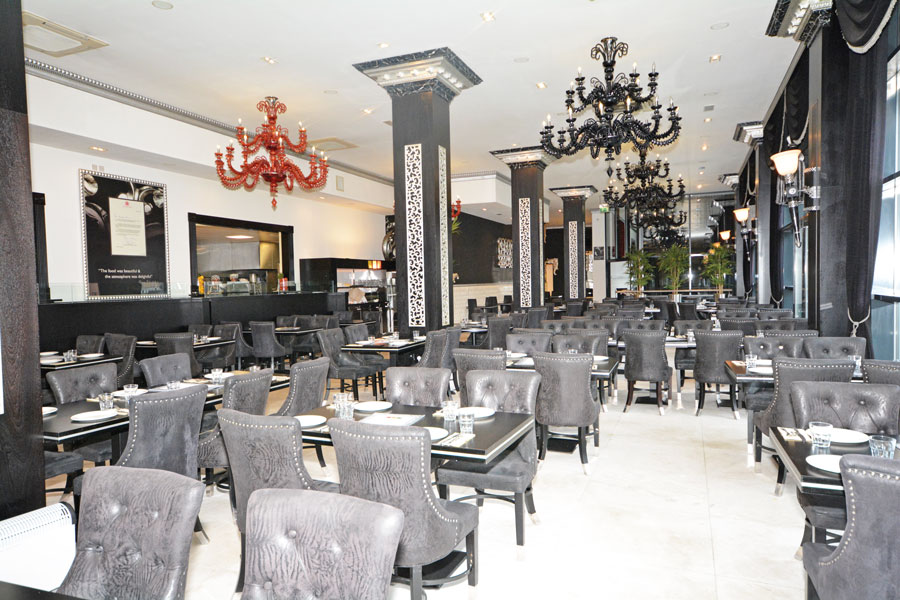 MUMTAZ IS BACK IN LEEDS

Big plans are afoot for the former Chandeliers restaurant based in Leeds Dock after Mumtaz director Rab Nawaz bought back the ailing restaurant which he originally opened back in 2009.Expect changes both front of house and in the kitchen following Rab taking over the reins last month at the 250-seater waterfront site, that enjoyed a £3.3m fit out when it originally opened.
Famed for its fabulous location, Venetian Murano chandeliers and Versace sofas, Mumtaz Leeds was opened to a fanfare of media and celebrities in 2009 and employed over 50 staff at its peak. But then the recession hit and when Mumtaz pushed into new markets the restaurant was sold to a third party.
Four years on, Rab has bought back the restaurant as a going-concern and is determined to bring it back to its former glory with new innovations being introduced across the restaurant. He explained: “Mumtaz Leeds was really a labour of love for me all those years ago and, whilst we had to make some hard decisions at the height of the recession, I never stopped believing the restaurant could be a huge success.
“I am now delighted to have personally taken back full control of the restaurant and the name has been changed back to Mumtaz Leeds. There have been many changes; the interior is updated, the menus are being revamped and we are looking forward to welcoming back Mumtaz customers, both old and new, over the coming weeks and months.”
As well as spending thousands revamping the front of house, Rab is also overseeing a reinvention of the menu, introducing a new curry & caviar tasting section. This section of the menu uses a specially imported organic caviar that takes around 20 years to come to fruition in the mountain spring waters of Andelucia, Spain. Rab is one of the first to import the caviar to Britain and is confident it will soon win over an army of new fans, as well as wow existing caviar connoisseurs.
He said: “I wanted to introduce something different to Mumtaz Leeds and when I saw this product I knew it could be a real winner. We are teaming this top quality caviar with one of our own-recipe Kormas so the flavours complement, not compete, with each other. We will also be looking to introduce other dishes, including possibly a fish curry at a special monthly curry & caviar evening.
Mumtaz Leeds has also gone back to the original business ethics of the parent company and no longer serves alcohol on its premises. “We have some delicious mocktails, the famous Mumtaz Lassi as well as sparking non-alcoholic wines.” added Rab. “We are a family run business and I want Mumtaz Leeds to be a family-friendly place to dine. I have big plans for the restaurant and we have already seen a huge turnaround in the number of diners coming in and commenting on the changes; it’s wonderful to see the restaurant coming back to life again!”
Further details are available by going to www.mumtazleeds.co.uk or booking can be made on 0113 242 4211 or contact@mumtazleeds.co.uk To enter a competition to win a
meal for two worth upto £35 at Mumtaz restaurant
go to the competition page