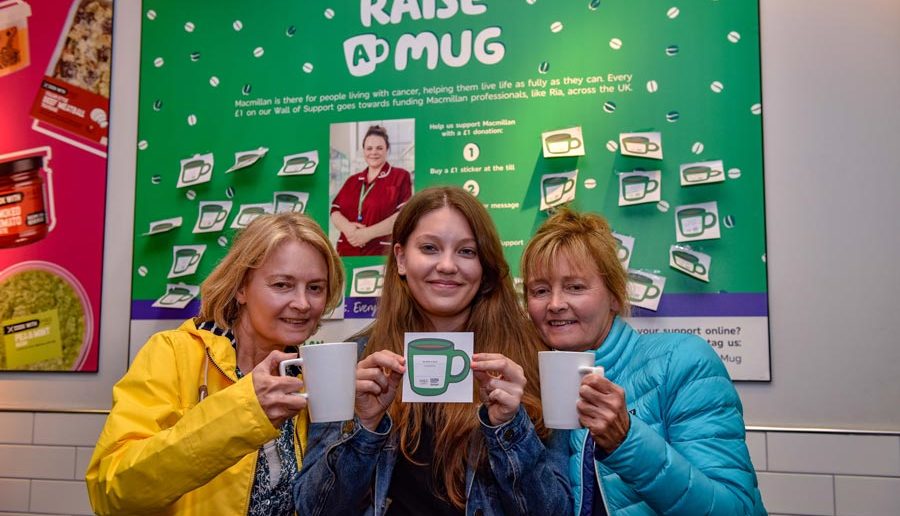 Customers Paula, Teah and Karen next to M&S Leeds' Wall of Support
Uncategorized

By yorkshire reporter on 16/09/2019 0 Comments
Customers Paula, Teah and Karen next to M&S Leeds' Wall of Support

M&S Food stores in Yorkshire are celebrating 10 years of partnership with Macmillan Cancer Support this September with a host of activities to raise funds for people living with  cancer, including an in-store Wall of Support and fundraising events on 27 September to mark the World’s Biggest Coffee Morning.

To mark the fundraising milestone, stores including M&S Leeds have introduced a Wall of Support to encourage customers and colleagues to share their messages of support to “Raise a Mug” for Macmillan or a loved one. Mug message notes will be available to purchase from check-outs for £1, and customers are encouraged to stick their message on the Wall of Support.

Alongside this, M&S Leeds has lots of fundraising events and initiatives taking place in-store throughout September including a sponsored bike ride, a bake sale and a tombola, and on the day of the coffee morning itself courageous store colleague Charlotte will be getting sponsored to ‘Brave the Shave’ to raise extra funds.

M&S stores in Yorkshire are inviting customers to join them for an extra special cup of coffee and slice of cake throughout September, to help them support Macmillan. M&S Food is introducing more products into its Macmillan Coffee Morning range than ever before, with 10 per cent of sales from each product donated directly to the charity. Available throughout September, the range will include fresh cream cakes for the first time, with favourites such as Chocolate Eclairs, Strawberry Tarts and Jam & Cream Horns, as well as a delicious box of six Assorted Cream Cakes. Joining the cakes this year will be limited-edition “Fancy a Coffee?” and “Fancy a Cuppa?” mugs as well as a stylish and sustainable new travel cup for hot drinks on the move.

A special purple and green Colin the Caterpillar will be returning for a second year, among a host of other well-loved cakes, including a Lemon Drizzle and four-pack of Mini Victoria Sponges, all donating to Macmillan. M&S Cafés will once again be supporting by donating 5p from every coffee and slice of cake they sell throughout September, to Macmillan.

Last year, stores in Yorkshire raised over £140,000 to support Macmillan professional roles in hospitals and within the local community, such as nurses, occupational therapists and dieticians. Local M&S Food stores and Cafés will join forces nationwide to host Macmillan Coffee Mornings on 27 September.

Across a decade of fundraising, M&S Food has raised over £16.3 million as official partner to Macmillan’s World’s Biggest Coffee Morning. All donations from M&S go towards funding Macmillan professionals who support the growing number of people living with cancer to live life as fully as they can. In the last year alone, M&S Food raised almost £3 million, enough to fund 55 Macmillan professionals for a year. An incredible £2 million alone came from the World’s Biggest Coffee Morning in-store events.

Paul Campbell, Store Manager at M&S Leeds, said: “We’re delighted to be celebrating 10 years of partnership with Macmillan’s World’s Biggest Coffee Morning and look forward to seeing thousands of people across Yorkshire coming together once again to join us in stores to support Macmillan’s Coffee Morning this year. The addition of the Wall of Support for 2019 is another fantastic way for the community to get involved, show their support and share their stories.

“With the number of people living with cancer constantly growing, widespread support has never been more important. Macmillan professionals are a lifeline for many patients and their families; giving crucial emotional support, helping manage treatment side effects and sharing practical advice like diet and lifestyle tips.” Adam Nash, Senior Partnerships Manager at Macmillan Cancer Support, added: “We’re thrilled to be celebrating this milestone anniversary with M&S Food and having it marked with the brand-new Walls of Support. It’s great to see Colin the Caterpillar is having a Macmillan makeover again and donning his purple and green sprinkles in aid of Coffee Morning. All the money raised by M&S staff and customers goes towards funding Macmillan professionals to help people with cancer live life as fully as they can.”