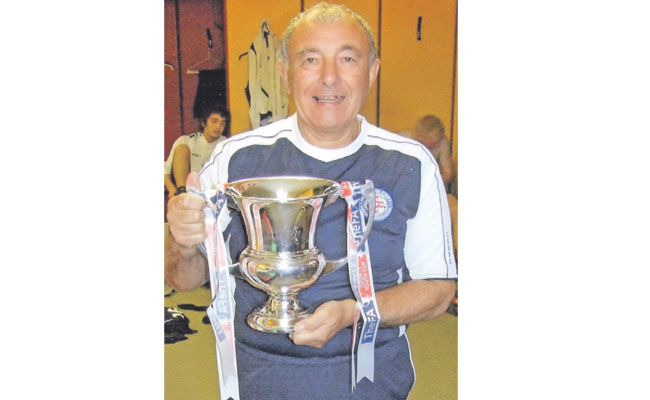 Ron Fisher of Leeds has made a prolific contribution to local football with over 61 years of service as a coach and physio to young players in and around Leeds.

I went to visit him at his home where I found him and his wife to be very friendly and welcoming. His love for the sport and his fondness for the many boys he has seen grow into men over the decades was clearly evident. It is easy to see that Ron Fisher’s passion in life has been and continues to be local football.

Ron’s love of football started as a young boy when he thoroughly enjoyed playing at amateur level, but shortly after finishing National Service he sustained a knee injury. The advice of his doctors was to not play football again, due to the strain the sport placed on his knees. He says this was ‘a major blow’ to him, and he couldn’t imagine life without football. Following a discussion with the father of his wife to be, who at the time was a voluntary club leader at Market Districts Boys Club, he agreed to help teach the boys and was appointed as a temporary leader for the 1950/51 season. He then ended up running several teams at the boys club. Whilst coaching one of the teams, Ron was approached by a parent named Billy Gibbons who had been a schoolboy international in his youth. He suggested that Ron attend a coaching course to get a proper coaching qualification and badge. He followed his advice and was awarded his preliminary coaching badge. He told me “Peter Gunby, the famous Leeds Utd coach was on the same course as me. He was a good lad.” To achieve the full badge though, Ron would have had to travel for a different course for a period of 2 weeks, which he was unable to do due to work commitments.
As part of his position as a coach to the under 16s he attended regular F.A coaches meetings. On one such occasion he was introduced to Les Cocker who was the physio for Leeds United and England. He invited Ron to attend a treatment of injuries course he was running at Leeds. Ron jumped at the chance and as well as gaining a qualification from the course, he met with Les regularly at Elland Road where Les helped him improve further and learn more skills.

Ron remained at Market Districts Boys Club for 15 years where he helped the junior teams win many trophies over the years. He was then offered the position of coach and physio at East End Park WMC. As some of the under 18s team from Market Districts (or ‘Mackies’ as Ron calls them) were going to have to leave as they were reaching the age limit, they followed Ron to East End Park. Here, they formed a great 2nd team but it wasn’t long before Ron was on the move again – this time to East Leeds WMC and the senior division Red Triangle League. Some of the ex ‘Mackie’ players again followed him which was testament to the respect they had for him as a coach. This move saw East Leeds WMC become the senior division champions in 1964/65 season.

In 1966 Market District Boys Club asked Ron and the ex players to return and form an open age team to compete in the West Yorkshire league where they won the cup and league title in division 2. The quality of the pitch at the Shaftesbury where they were based was not of the required standard to see the team promoted to the premier division, so they remained for a 2nd season in division 2 where they won the Leeds and District Challenge Cup. This was the end of an era though as Market Districts Boys Club closed down.

Following the closure of Market Districts, Ron was invited to be the coach/physio for Whitkirk Wanderers. He remembers “Whitkirk were a good team who played in the West Yorkshire premier league. During my time there, they won the Leeds and District Senior Cup by defeating Beeston St Anthony’s at Elland Road, and also the Greenwood Trophy in the West Yorkshire Senior Division and League Cup”. In 1975, whilst Ron was still at Whitkirk, he was asked to be the trainer/physio for the Leeds and District F.A Representative Team and just a year later for the West Yorkshire League Representative Team. All this was as well as being coach to the various senior and Junior Leeds Sunday League sides including Cherry Tree United, and Seacroft W.M.C. Understandably, this was an extremely busy time for Ron, and in the early 1980’s he made the decision to leave both Whitkirk and his West Yorkshire League position due to work commitments.

Despite his new job as a Lecturer at Leeds College of Art and Design taking up most of his time, he found time to travel to Europe for different tournaments over the next couple of decades. The first trip with Leeds F.A was to Lille in France in 1981, followed by a trip to Dortmund, Germany in 88/89. There were also two Leeds Twin Town International Tournaments – one in 87/88, and the other being the Centenary Tournament in 1999/2000.
Ron finally retired from football only a few years ago when recovery from stomach cancer forced him to slow down a little, or as he put it “my wife told me it was time to stop”. He has been awarded a plaque for outstanding service of over 30 years by the Leeds and District F.A and also by the West Riding F.A for 16 years of dedication as physio and trainer.

Despite Ron no longer actively working for football clubs he continues to give to the community. He holds a two day charity event every year in early November at Crossgates Shopping Centre where he displays his vast amount of club and team photographs spanning decades of local football. This proves to be very popular and many men enjoy reminiscing and looking for their picture taken during their time in junior football teams. In the past Ron has raised money for St Gemma’s Hospice and Help For Heroes. This is a man who has dedicated his life to football, and has certainly enriched lives of many youngsters over the years with his unerring support and encouragement. The title ‘Mr Football’ is a fitting tribute to this local hero.