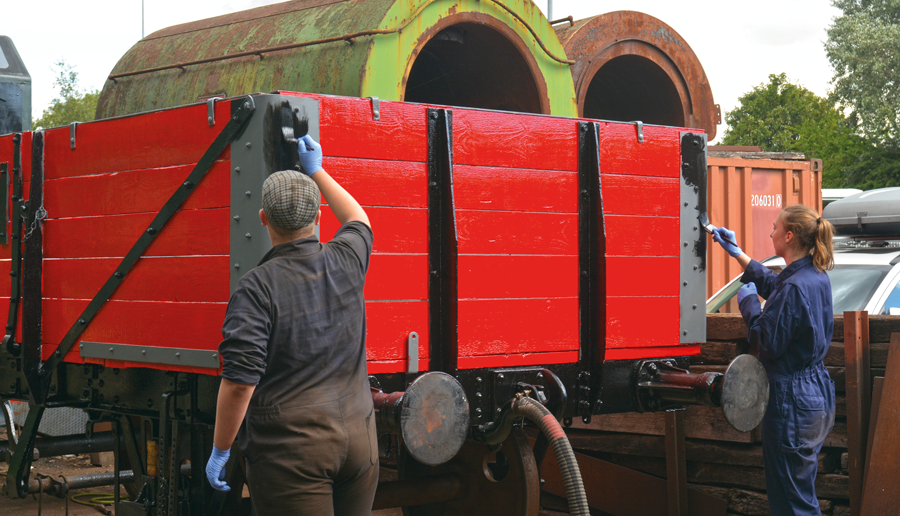 Preparations are well underway for the 50th anniversary of the closure of Middleton Broom Colliery. The Last Coals to Leeds event will commemorate the closure and is sponsored by Leeds City Council as part of their ‘love where you live’ project. The two-day event at the Middleton Railway will include fun for the whole family with plenty of opportunities to ride in style both on resident and guest locomotives which combine to bring to life the unique history of the railway.

To help ensure that everything is at its gleaming best for the event, young volunteers recently spent a week of their summer holiday restoring some of the wagons, giving them a new lease of life and learning new skills in the process. 17yr old Ellen Sayles and 15yr old Kenny Hall were amongst the young people who got stuck in with woodwork, metalwork and signwriting all under the careful supervision of experienced volunteers and previous young members now leading the project. Ellen also recently won a Lord Mayor’s award for her volunteering role at Middleton Railway and other charities.

The young members helped to repair and repaint the 5-plank ‘Middleton Colliery’ wagon and also the ‘Dogfish’ ballast wagon which was damaged by the neighbouring fire in July. The Dogfish was repainted in the NCB black livery and lettered as a Middleton Broom Colliery internal user and both are now ready to be enjoyed by the visitors.

As well as the opportunity to travel on the locomotives running between 09.30 and 17.00 over the event weekend, there is a photographic exhibition to enjoy, as well as the chance to purchase commemorative t-shirts and an event book. Middleton has also produced a children’s history of the colliery titled ‘Broom Pit – Canaries and Ponies’. This book is being distributed free of charge to every primary school child in Middleton Ward, as well as a bookmark incorporating a detachable ticket for them to ride the railway.

For more information on the commemorative event, including tickets, visit www.middletonrailway.org.uk