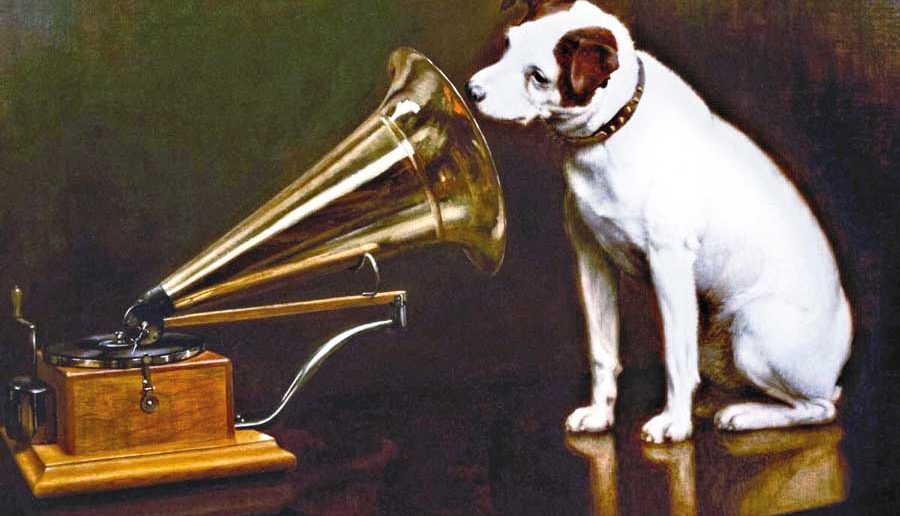 HIS MASTER’S VOICE AND NIPPER THE DOG

It’s always sad to hear of a business in trouble, particularly those considered an ‘institute’ and a household name and none more so than H.M.V with one of the most familiar trademarks in the world, Nipper the fox terrier ‘listening’ to His Master’s Voice on the gramophone for over a century. The origin of the trademark came from a painting by Francis Barraud of his dog ‘listening’ to a phonograph and titled originally ‘Dog looking at and listening to a Phonograph and later renamed ‘His Master’s Voice’.

There is a story that the original picture showed Nipper sitting on a coffin listening to a cylinder phonograph player rather than the disk we recognise so easily. The possible reason for the coffin might have been because the cylinder phonograph was able to record the owner’s voice and he might just have left a recording before his death for his family. This story is however in dispute.

‘Nipper’ as he was affectionately called was born in Bristol in 1884. He was discovered at the Princes’ Theatre by Mark Barraud, brother of Francis the artist. The dog’s name came from the fact that he liked to have a ‘nip’ at people’s legs, which can’t have gone down well with his victims! When Mark Barraud died penniless in 1887, Nipper was taken by his younger brother to Liverpool and the little dog would sit listening to a phonograph, head cocked on one side wondering where the sound was coming from. Francis Barraud must have kept this amusing scene in his mind, as it was about three years after Nipper died in September 1895 after returning to live with Mark Barraud’s widow in Kingston- Upon –Thames that he painted him.

After renaming the painting, Barraud offered it to the Royal Academy to exhibit, but they turned him down as did magazines who said that ‘No one would know what the dog was doing.’ Barraud’s next port of call was ‘The Edison Bell Company’ who at that time were the leading cylinder phonograph makers. Barraud was once more knocked back after the company said that ‘dogs don’t listen to phonographs.’

Barraud took the advice of a friend to change the colour of the black horn to a brass one. He then took a photograph of the painting to the newly formed ‘Gramophone Company’ and asked them if he could borrow a brass horn from them. In an article for the ‘Strand Magazine’ Barraud later wrote:

To Barraud’s delight, on the 15th of September 1899, he received a letter from the Gramophone Company offering him £50 for the picture and another £50 for the copyright which he accepted instantly. Confirmation of the deal came on the 4th of October 1899 when a representative of the company viewed the altered picture for the first time, and one of the most famous trademarks in the world was born. In January 1900, the painting made its debut on the Gramophone Company’s adverting literature, and soon after on some of their novelty promotional items.

However, it was not until 1907 that Nipper first appeared on the company’s letterheads, and then, three years later registered as a trademark, and the rest as they say is history. Francis Barraud worked on painting twenty-four replicas of the original commissioned by the Gramophone Company, and after he died in 1924, other artists carried on the tradition until the end of the 1920s As for Nipper himself, he is reputed to be buried under a car-park on Clarence Street in Kingston-Upon-Thames behind Lloyd’s Bank.