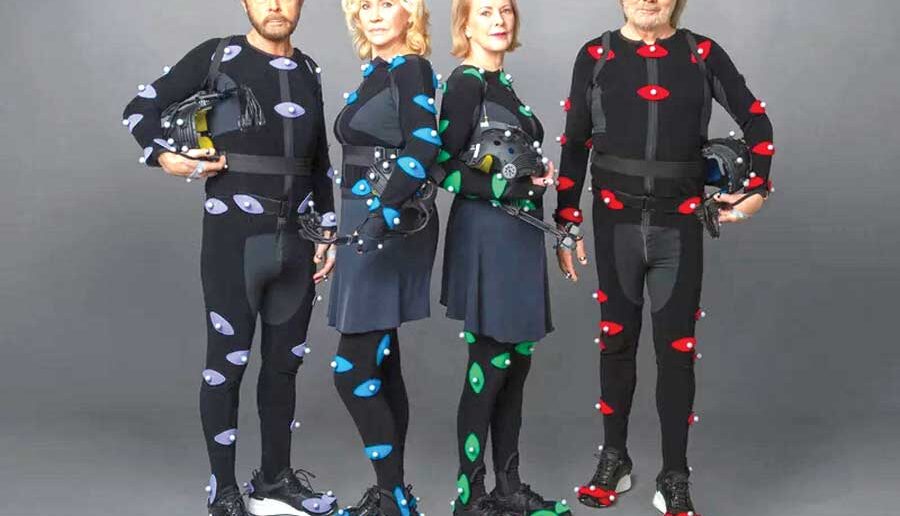 Guess we should start this month with one of the most anticipated comebacks in pop culture has finally come to pass: the return of Abba. Forty years after the bitter songs written in the wake of two band divorces for their last album, 1981’s The Visitors, the Swedish pop quartet has reunited for Voyage, an album of brand-new songs that will be released on 5 November – including, they say, a Christmas song. Two tracks from it, the stately and epic ballad I Still Have Faith in You and the shimmying Don’t Shut Me Down, are out now. The group – Benny, Agnetha, Anni-Frid and Björn – have also announced a new concert experience in London, also called Voyage, beginning in May 2022. Digital versions of Abba from their heyday with a live band! In another forty years bet you’ll be able to have them “live” in your own living rooms! So, you better get out to live venues whilst you can.

The Darkness have released their brand new single ‘Jussy’s Girl’, the latest song to be taken from their forthcoming album Motorheart out November 19th. ‘Jussy’s Girl’ is sensitive as a falling boulder. It oozes rock n roll extravagance with huge 80s influenced riffs and an anthemic chorus that summons the inescapable carnal powers of love. Motorheart; a record of immeasurable rock and roll extravagance, and yet another masterpiece from England’s favourite rock icons. The new single follows the release of the high-octane riffola ‘Nobody Can See Me Cry’ and the growling, pounding title track which pays homage to a devoted robot. They will be showcasing the live potency on their extensive 22-date UK headline tour throughout November and December this year. A true spectacle to behold, fans will be treated to brand new songs from the album as well as hits from across their award-winning, platinum selling back catalogue. Support also comes from British Lion, the up close and personal side project of legendary Iron Maiden founder and bassist Steve Harris. They are the Leeds O2 academy on December 11th.

Beth Hart is as real as it gets. In a music industry full of glossy production and airbrushed photoshoots, this is one artist who throws down her cards, shares her darkest secrets and invites you to join her for the ride. With War In My Mind, this Grammy-nominated talent has never served herself up so raw on a record, one that embraces her merits and flaws, channels her bittersweet headspace and spins gold from her demons. “More than any record I’ve ever made, I’m more open to being myself on these songs,” Beth explains. “I’ve come a long way with healing, and I’m comfortable with my darkness’s, weirdness and things that I’m ashamed of – as well as all the things that make me feel good.” At 47 – and proud of it – Beth is basking in a golden period. The success of 2016’s Fire On The Floor album has garnered yet more critical acclaim, growing sales and sold-out shows at iconic venues. Having followed the fascinating career of Beth Hart for a quarter-century, we’ve learned not to rule anything out – so long as it’s real. And now, with War In My Mind, this songwriter has made a record that bares her soul, wears her heart on her sleeve, and makes no apology for it. “Y’know,” she concludes, “when we did the photoshoot for this new album, it was the first time that I said, ‘No makeup and no airbrushing’. It was the first time that hearing my voice back didn’t make me sick. It was just neat to be 47 and not trying to be young, and competitive, and all these things that I’ve always felt like I’m supposed to be. On this record, something told me, just let it be what it is, man. I think I’m starting to make a little headway, getting closer to the truth. And I might not know what the truth is… but I’m OK with that.” The Grammy nominated singer-songwriter play York Barbican on 31st October.

Evil Scarecrow are one of the finest parody metal bands from Nottingham to have written a song about a robot! They gave an incredible and very emotional performance at the Bloodstock Festival recently. The absolute joy emanating from everyone who saw it was beyond uplifting. Indeed, it encouraged the band to tour once again. You can catch their version of insanity at The Crescent Community Centre in York on 30th October. A perfect treat for Halloween-Eve! Evil Scarecrow’s live show has been captivating and sometimes rather surprising audiences for many years.  Everywhere they play they win new fans. Their passion and enthusiasm ensure they always connect with their audience, who in turn spread the word far and wide.

Self Esteem has shared another cut from her forthcoming second album Prioritise Pleasure in the shape of her undeniable new single ‘Moody’. The anthemic rhythmic flourishes of funk-pop on ‘Moody’ are paired with some of her sharpest, wittiest lyricism to date: “sexting you at the mental health talk seems counterproductive…” and has enraptured crowds on its first live outings at shows across the summer. Of the new track, Self Esteem told Yorkshire Reporter: “Moody is a song about reclaiming being a moody cow. My whole life I’ve been referred to as mardy (northern for moody) but lately I’ve been realising as a woman in this world, especially as a woman in the music industry, of course I’m moody! It’s such a slog even getting heard. I’d love to be sweet and happy go lucky but I’m afraid I’m too tired to be most of the time. ” Due for release on Friday 22nd October via Fiction Records, Self-Esteem’s sophomore album Prioritise Pleasure features the acclaimed singles ‘Prioritise Pleasure’, ‘How Can I Help You’ and ‘I Do This All The Time,’ which made the Radio 1 and 6 Music playlists. Before the end of 2021, Self Esteem will embark on a 19 date UK tour across November the Leeds date at The Belgrave on 11th November sold out pretty quickly. Fortunately,

Self Esteem has also announced a brand-new run of UK tour dates, set to take place in February and March 2022. The tour includes eight dates across the country, taking in London’s Forum and concludes with a hometown show at Sheffield’s Octagon. Her Leeds date at Leeds University Stylus is pencilled in for Wednesday 2nd March. A space for both catharsis and euphoric celebration, a Self Esteem live show is not to be missed.

Finally, this month The Red Hot Chili Peppers have been around, and have not just fallen off the turnip truck, but to a man, they have never been more thrilled, bursting with commitment and purpose, as they are regarding this upcoming tour in 2022 that is shrouded in mystery. They have no interest in resting on past accolades, awards or commercial success, this is a mission, they intend to channel the mightiest spirits, and give everything they’ve got. With guitarist and all-around cosmic musician John Frusciante back in the fold, the boys will be firing on all cylinders! They will be in Yorkshire I’m not allowed to tell you until November though!