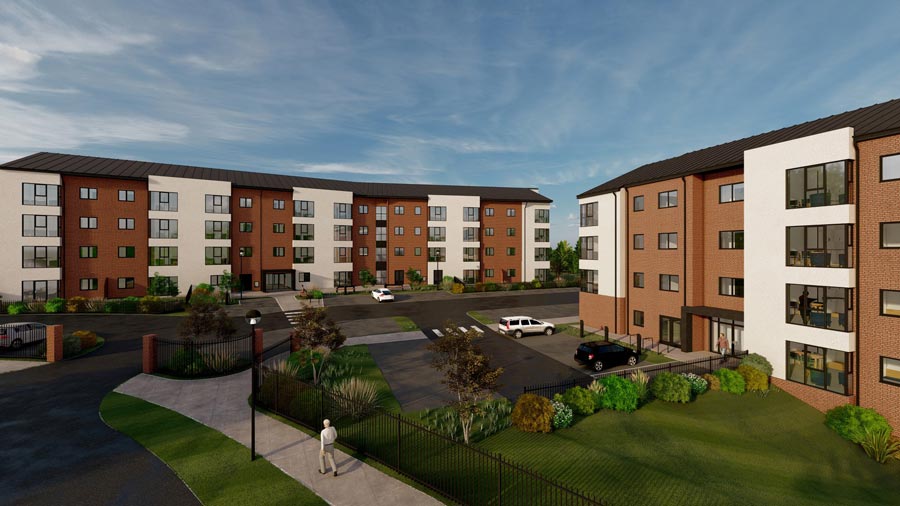 Leeds Jewish Housing Association (LJHA) has announced that building work on the largest affordable homes project in its history is underway in the north of the city.

The scheme – at Queenshill Avenue in Moortown – comprises 85 new properties, including 51 sheltered housing apartments for those aged 55 and over, and 34 general needs apartments.

It is being delivered in partnership with government housing agency Homes England.

Initial meetings were held early last year with LJHA tenants who would be affected by the necessary demolition work.  A wider community consultation exercise was also launched. Several changes were made to the original designs before an application for planning permission was submitted in September.

This was formally granted in January and the appointed contractor, ENGIE, is now onsite.

Construction is expected to take 18 months with workers following the latest government guidance on safe working which was published recently.

Upon completion, LJHA will have four sheltered schemes on the Stonegate Road site.

All 181 sheltered apartments will be connected to form a sheltered village with easy access to the Ziff Community Centre. “We are thrilled that the project is being delivered.

“It is the culmination of many months of hard work to create a scheme that we feel the community desperately needs.

“Queenshill will increase our overall stock by 13% and represents our biggest single development since LJHA was founded almost 67 years ago.

“It is a proud moment for everyone involved.” Craig Simons, LJHA Director of Operations, paid warm tribute to the 22 tenants whose properties had to be demolished to make way for the new buildings and other amenities on the site, including car parking space and gardens.

“I would like to thank everyone who had to move out of their home as part of this development.  We do appreciate how hard this has been for them personally.

“They worked closely with us during extremely stressful times and their understanding is greatly appreciated.” “These are exciting times for LJHA. This project will allow us to provide more homes in the heart of the community.  They will be low rent homes that look fantastic, are modern, energy efficient, warm and secure.

“Whilst this is an ambitious project, we are not sitting on our laurels and our Board are now looking at what our next development opportunity might be as we aim to be the number one landlord for the Leeds Jewish community.

“Feedback we have received so far is that people want more family housing too and we would love to look at building for families next.”