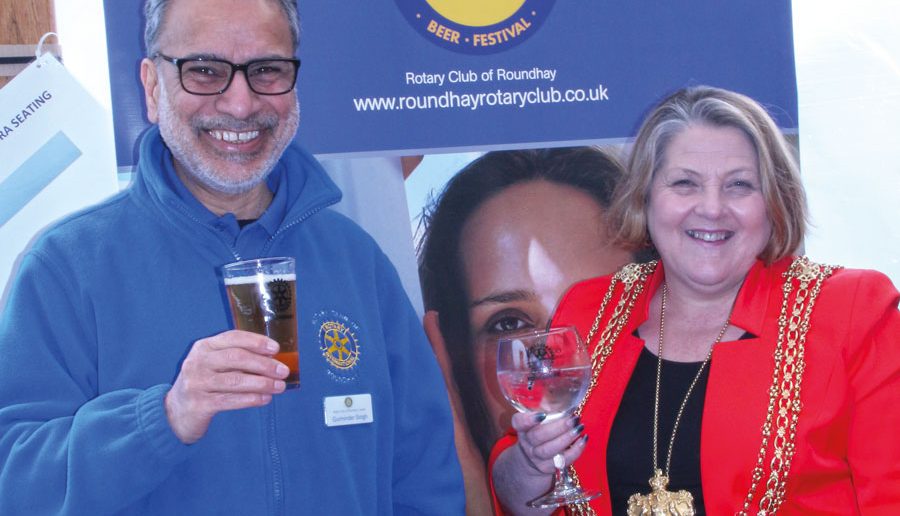 The Lord Mayor of Leeds Cllr Jane Dowson was welcomed by the club President Dr Gurminder Singh when she visited the 7th annual North Leeds Charity Beer festival organised by the Rotary Club of Roundhay and beer writer Sam Parker.

Cllr Jane Dowson said, “This event has become a major fixture for the local community and the money raised is also invested back into the community. During conversations I heard how they fund over 20 children from John Jameson East SILC to attend the “Kids Out” at Lightwater Valley, help ARC in Chapeltown by sending children to a conference which shows how to stand up to hate and bullying and getting refugees to explain the problems they face in the community.”

Cllr Dowson added, “One of the most inspiring things I heard was the funding of a pupil from a deprived area attending Roundhay School who was sent on a one week Youth Sailing programme, her aim in life was to become a doctor, and she has now been offered a place at Imperial College London because the University was impressed by her get up and go attitude.”

The club has also purchased 2 defibrillators for public use which are installed at Oakwood and Moortown as well as 2 rowing machines for the Leeds Rowing club located at Roundhay Park Lake.

Dr Singh said, “The club are also involved with many hands-on projects including “Stroke Awareness” campaigns, Desert Island Discs in care homes where we get residents to tell us of their memories about their favourite piece of music and assisting other charities with manpower for their events and collection days.”