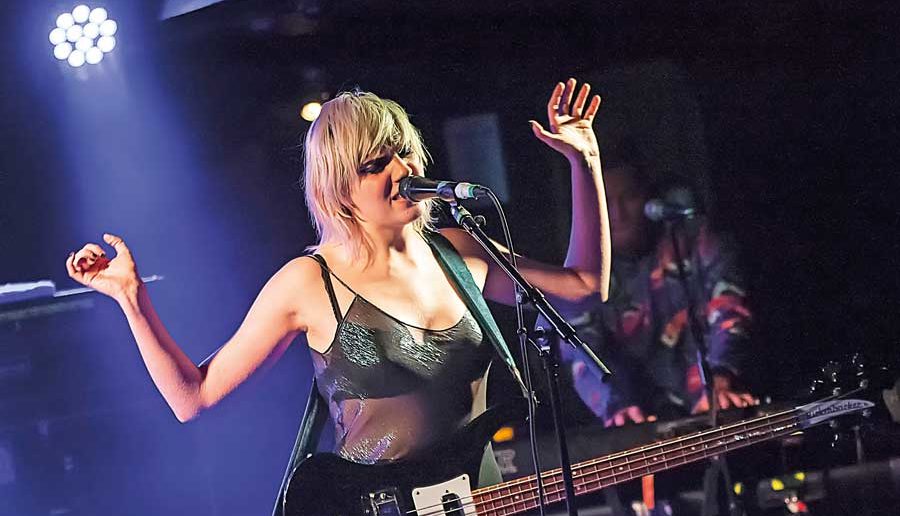 End of year lists are subjective and because of the way music is listened to nowadays, difficult to compile. However, here are my selection of the best five records I heard in 2018.

First up SUNFLOWER BEAN and their flawless “Twentytwo in Blue”. It showed Sunflower Bean stayed true to their guitar band core and classic rock-inspired roots, while exploring new sonic textures with more direct and progressive themes. Unlike their debut, which was essentially a compilation of songs Sunflower Bean wrote while still in their teens. Dream Wife released their long-awaited self-titled debut album in January, A commentary on society’s objectification of women they have become one of the foremost up-and-coming bands out of the UK.

ROD STEWART released his 30th studio album – ‘Blood Red Roses’ –in September. The album highlights Stewart’s acclaimed song writing roots – blending the poignant observation, self-reflective introspection and playful swagger. His best record since Atlantic Crossing. ANNA CALVI’s much anticipated third studio album, “Hunter”, saw Calvi celebrating the transcendent aspects of pleasure and finding a community and home in queer spaces. According to Calvi, the album is about “exploring a more subversive sexuality, which goes further than what is expected of a woman in our patriarchal heteronormative society.” It is a supreme record.

HINDS sophomore album “I Don’t Run” showcased a bigger, better, faster, funnier, more dexterous Hinds. Certainly, a product of a band fighting for their place, a band unwilling to rely upon their successes, a band who have just begun to prove themselves, and a band who plays hard but works even harder. Finally, the wonderful CHVRCHS. On their third album, the Glaswegian electropop trio found a changed sound and a harder edge ‘Love Is Dead’ is substantial with scorching cynicism. A record that explores if love is worth redeeming in these shadowy political epochs.

Looking forward to 2019 live music is going to play an important part to the cultural voracity of the city. First Direct Arena is at last beginning to live up to its reputation: Frank Turner and then Snow Patrol open the season at the end of January. Then the rest of the year sees a steady stream of superstars! George Ezra, Little Mix, Michael Buble, Rita Ora could be overshadowed by rare concerts from Mark Knofler, The Eagles and Cher. Who themselves will be no doubt overshadowed by Elton John final ever UK concert on December 9th.

Of course, it will be the summer months that Leeds will become the centre of the musical universe. Live At Leeds is now considered as the most prestigious of new music festivals and a worthy opening to the festival season. Live At Leeds triumphed at the UK Festival Awards 2018, with the festival proudly accepting the award for the ‘Best Festival For Emerging Talent’ and will be in the running again this year. Heading up the line-up this year are some of Live At Leeds’ true success stories, led by returning guitar heroes Sundara Karma. Since forming in Reading, their blend of infectious hooks and direct lyrics have taken on the globe – with a debut album that took them to headline nights at London’s Brixton Academy and beyond. After returning recently with the mesmerising ‘Illusions’ and a hotly anticipated second album on the cards, their set at Live At Leeds is bound to be an unmissable spectacle of what a band can be in 2019. The festival takes place across numerous venues on 4th May.

Boasting a standout array of names already confirmed, Slam Dunk Festival is shaping up to be the definitive home of alternative culture in 2019. With the likes of All Time Low, Bullet For My Valentine, New Found Glory and Simple Plan. The festival has also announced plans for a new site for Slam Dunk North, moving to Leeds’ Temple Newsam Estate – last used for Leeds Festival in 2011 – so even more pop-punk fanatics can make their way to the definitive date of the alternative diary. Reaching across the stunning greenfield site in on Saturday 25th May – Slam Dunk 2019 is the next evolution for the go-to destination of rock. Leeds Festival will have to go some to keep up – more about that next month!