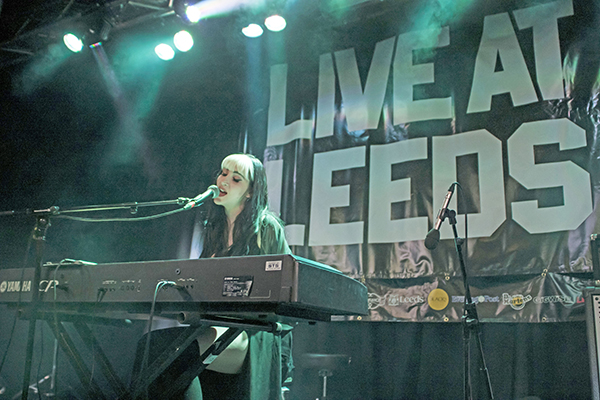 There has been a ton of press devoted to the place of women in music since the turn of March. So it may come as a surprise that May saw some of the finest female performers in Leeds.

Firstly, Live at Leeds, where thousands descended upon Leeds City Centre with a choice of over two hundred bands, may have had them queuing around the Town Hall to see The Cribs but also playing too packed venues were Misty Miller and Chloe Black. Miller, the personification of Riot Girl punk wowed them at Beckett University where a raucous set as every bit as good as The Cribs rocked a very enthusiastic crowd. Black, may be at the opposite end of the spectrum musically, but the Australian songstress was just as captivating in her own way. Sitting alone at a piano with whisky infused blues. Live at Leeds is excellent at giving artists on the fringe and these were a superb example of why Live at Leeds excels.

A splendidly organised, musically exquisite start to the festival season. They will have to go some to better it next year on its tenth anniversary but get your early bird tickets organised now!

A few days later and Beth Hart packed out the O2 Academy. It says a lot about an artist that they can stop half way through a song because they get the words wrong and still have the audience in the palm of their hands. It says even more that they command the band to instantly re-jig the song and sound as tight as they did the whole concert: Beth Hart did both at the O2 Academy in Leeds where a truly captivated and enthralled crowd hung on to her every word. A sneeringly honest performance too. Even a heart rendering performance of My California dedicated to said husband did not come close to making it a soppy type of concert. This is simply because the 43 year old Hart, former drug addict and bi-polar sufferer who blew her first chance at stardom almost two decades ago has a voice so blues rock courageous that it pins you to the canvas like her namesakes wrestler Brett Harts signature move! Whether performing masterfully on the piano, acoustic guitar or simply rocking with her near perfect band Beth was a force field laying bare her soul and life. No better exemplified by The Ugliest House On The Block. A piece of genius about the shack she and her husband lived in for fifteen years before her career took off a second time.

The performance by Patti Russo at Leeds City Varieties was just as honest too. It would be easy for Patti to simply garner favour off the back of her musical relationship with Meatloaf. That she does not is to her credit. Her preambles to the songs she’s written are at times a little off the wall but when she sings she brings the house down every time. She finished with sort of homage to Tina Turner that Tina would no doubt be proud of.

Both Hart and Russo do show though that no amount of electronic wizardry can disguise the fact that first and foremost you have to have the voice to captivate and both women did that with aplomb.

This adoration of women in rock will also continue into June. City Varieties will be the venue again for two more brilliant performers! Amanda Palmer and Sarah Cracknell may have started life in bands but will perform there as solo artists on the 5th and 21st June respectively. Both will be packed out and both will without doubt take the breath away.