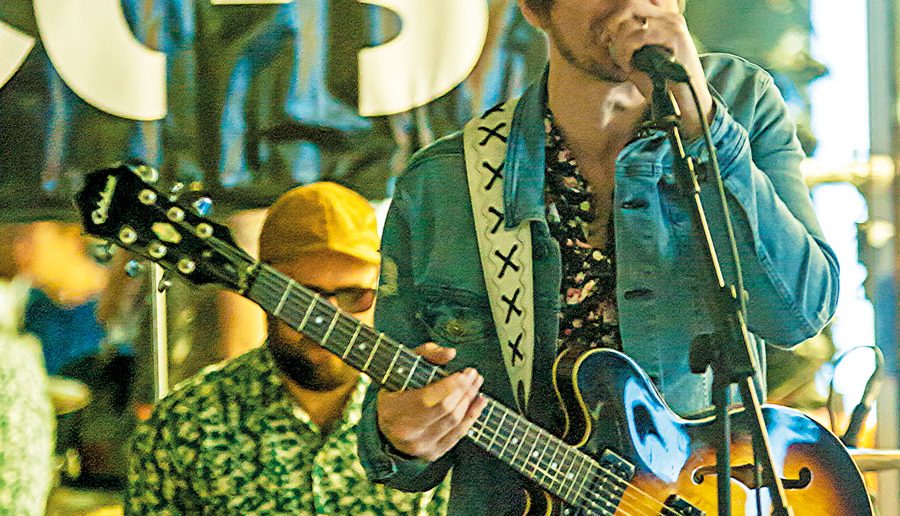 Since its inception Live At Leeds has promised as its ethos to bring tomorrow’s big names in music to you before anybody else. 2018’s offering was without any shadow of a doubt true to that ethos. You maybe had to dig a little deeper this year perhaps but when you did it was a well of satisfaction. Although the list of artists this year was exhaustive you didn’t have to become exhausted to find the cream of the new talent. Locally, Leeds is producing some of the best and two of those opened the festival: Tallsaint, returned from a different guise but still provided stinging tunes comparable to St Vincent.

However, it was Apollo Junction who deserves special mention. These guys have been honing their style and musicianship as long as the festival has been going. They are now as tight as a drumskin musically but still possess the cheeky fun of bands just starting out. The highlight of their performance was the jangly earworm that is Begin, their latest single, which is probably the best four minutes of oozing indie pop to come out of Leeds since The Kaiser’s Ruby. The Vaccines, Circa Waves, Peace and Ash may have been the festival’s heavyweights, and sterling performances they gave too. However, you had to be early to see the undoubted highlight of the whole festival. Hatchie is Harriette Pilbeam, a newcomer from Brisbane, Australia, who has already attracted plaudits at home, prior to inevitably picking up wider acclaim. Having played with various friends and bands in Brisbane, Hatchie is her first foray into solo territory.  Her world is a dreamy landscape inhabited by cascading synths, jangling guitars and undeniable, irresistible pop melodies. It could have gone downhill from there, but it didn’t. That it didn’t is due to the festival’s amazing diversity. Lydmor, the eccentric young artist jumps down the stage into the audience, her knees bruised, her body covered with neon-coloured symbols. Her powerful voice raises over pumping beats and dreamy synth sounds to sing of sex and drugs, romantically effected emotions as well as faraway places. Whoever saw her at Belgrave will not forget her in a hurry.

Danish trio Nelson Can have come a very long way indeed since their inception. Built on a diy approach to storming the music industry head-on, rewinding back to their beginnings in 2011 found band members Selina Gin (vocals), Signe SigneSigne (bass) and Maria Juntunen (drums) as three head-strong young women with little else other than a solid conviction in their unconventional approach to their fledgling career and a “no guitar” policy that’s still in force today. With a noticeable lack of guitars, their back-to-basics, drum and bass orientated sound is original and simple, inspired by acts like The White Stripes, Yeah Yeahs and Siouxsie and the Banshees. In the last few years the band has toured across most of Europe, supporting the likes of The Black Keys and Royal Blood. Even from their shortened set they will be headliners soon for sure!

The 19-year-old Cambridge native, Grace Shelley pulls together the ethereal vibrations of dream pop into her project, Tyne. In 2016, she released her debut single, ‘Somebodies Something͟’ under the UK independent label, 37 Adventures. Since then, Tyne has received heavy support from BBC Radio 1 when her track Girly was named BBC Introducing track of the week and her set at Headrow House was simply sublime

Based in Brighton, Thyla majestically blend glassy distorted guitar tone with driving rhythms and lilting ethereal melodies; front woman Millie Duthie brings crystal like beauty to Thyla’s blend of dynamic alt-rock. Herself, Danny Southwell, and Dan Hole met at college in early 2015 and found instant musical companionship but it wasn’t until guitarist Mitch Duce joined, that the band found their sound.  They spent much of late 2016 reimagining their centre and writing and recording new music that garners a distaste for the stale state of the industry. They spent Live At Leeds forming a bottleneck at the free stage in Briggate: It could only happen at this festival.