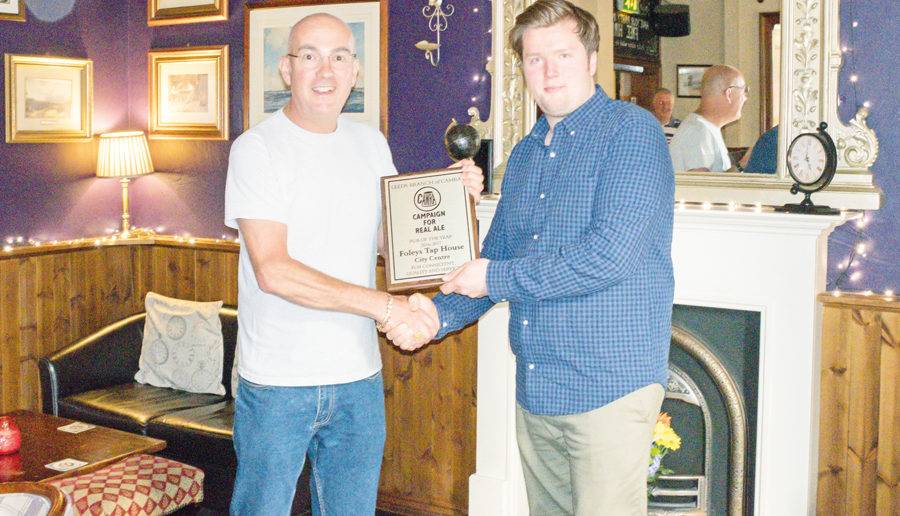 LeedsCAMRA Pub Of The Year 2017

By yorkshire reporter on 02/08/2017 0 Comments
■ Richard Coldwell of LeedsCAMRA presenting Pub Of The Year Award 2016/17 to Jason Allison, manager of Foley’s Tap House

The prestigious LeedsCAMRA Pub of The Year 2017 accolade has been awarded to Foley’s Tap House. The York Brewery pub are no stranger to awards having previously won LeedsCAMRA ‘Best Cider Pub 2015’ and National winner of ‘Best Cider Pub 2016’ in the Great British Pub Awards. Additionally they have been shortlisted as one of the six finalists for the National ‘Best Beer Pub’ at the forthcoming 2017 Great British Pub Awards, to be held at The Hilton Park Lane, London in September 2017.

Jason Allison, manager of Foley’s said, “Myself and the team at Foleys are thrilled to have picked up Leeds CAMRA pub of the year 2017. We’ve put in a lot of hard work over the last couple of years to make Foleys an all-round great pub so it’s fantastic to have some recognition for our efforts. We’ve gone the extra mile with big annual beer and cider festivals to really put something special together for our customers. We will continue to do so for as long as there is the demand! Once again, a huge thank you to any and all of the people that voted for us!”

Tony Jenkins, LeedsCAMRA chair explained, “Foley’s is a worthy winner of this year’s LeedsCAMRA Pub of the Year. It’s known throughout the city, and further afield, for its range of cask ales, craft beers, and ciders. The beers from York Brewery are always a sound choice for regulars, and these are complemented by an ever-changing selection of guests from across the country.  Truly something for eve-ryone. Competition for the award is always close, with over 400 out-lets for real ale in Leeds.  Congratulations to all the team.”