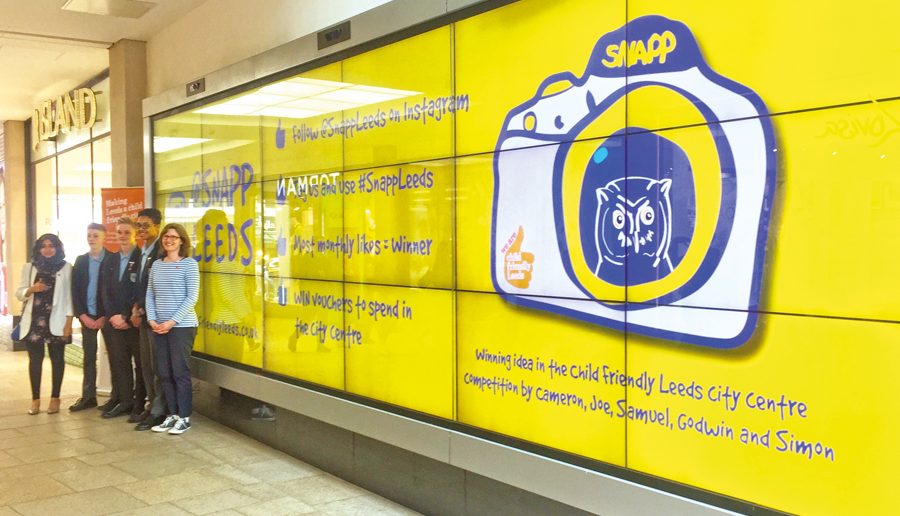 Teenagers across the city are being given the chance to win vouchers by taking pictures around Leeds city centre and uploading them to new Instagram page @snappleeds.

The idea came from Cameron, Godwin, Joe, Samuel and Simon from Abbey Grange Academy, who wanted to create an enjoyable experience for young people ‘through an interactive picture taking activity in and around the city centre’.

They said: “We thought that it would be a good idea for teenagers to become more aware of their surroundings by taking ‘Snapps’ of something related to a monthly topic, with the first being royalty, linked to the royal wedding. We believed this idea could spark more ideas in young people and help them gain a better understanding of photography whilst also having the chance to win prizes.” They went on to say: “Children and young people get bored whilst shopping with their parents and many teenagers in this generation use electronic devices with free apps such as Instagram.”

In partnership with city centre ambassadors including Trinity Leeds, Child Friendly Leeds has worked with the young people to make this idea a reality. The official launch took place at Trinity Leeds where the young people’s poster was presented on digital screens. Every month, the group will decide on a theme and teenagers across the city can ‘snap’ photos linked to this and share them via Instagram on @snappleeds using #SnappLeeds. The picture that generates the most ‘likes’ each month will then win vouchers to spend in the city centre.

The competition is for young people who live in Leeds aged 13 – 19 years old (up to 25 with additional needs). Prizes will only be awarded to young people that meet this criteria.