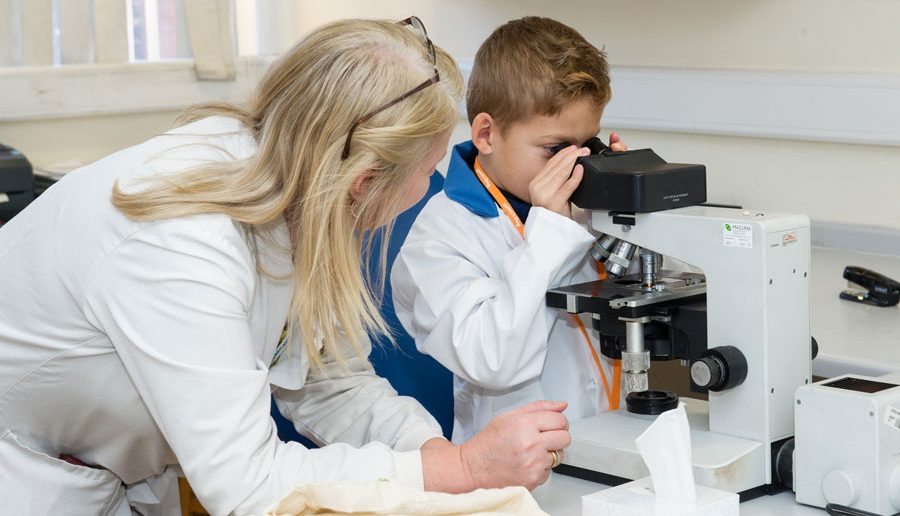 Established in 2014, Harvey’s Gang aims to involve patients, particularly children and parents, in the laboratory aspects of their transfusion treatment.

LTHT is the first Trust in the Yorkshire and Humber region to join the gang and Leeds Children’s Hospital patient William Rhodes, aged 9, became the first patient to get involved when he was shown around the Pathology department.

As part of his visit William, who has Diamond Blackfan Anaemia – a rare bone marrow failure disorder where the patient fails to make enough red blood cells, had blood samples taken and then took his sample to the Haematology lab where his journey began.

William, in his Harvey’s Gang lab coat, watched his sample being processed and was able to see his blood cells under the microscope, with a little help from the Trust’s Haematology Biomedical Scientists. It was then off to the Transfusion lab where William booked his sample in and could see the laboratory records of every transfusion he had received since he was five months old. William worked with the Transfusion Biomedical Scientists to understand which blood types were suitable for him, after that William was able to select the units of blood that would be used for his transfusion.

After the tour William went back to the clinic, ready for his transfusion that he had helped to cross match.

Caroline Rhodes, William’s mum, said: “The visit to the blood labs really made a difference to William’s understanding of the whole process, he now knows where his bag of blood comes from and he knows where all his blood results come from and how it happens. This all helps him to understand his illness and the meaning of certain words that may seem pretty straight forward to us.

“This means a lot to us as parents as William sometimes struggles to understand things when explained verbally and it always helps him to see things visually.”

Jennifer Rock, Transfusion Practitioner at Leeds Teaching Hospitals NHS Trust, added: “Harvey’s Gang is a fantastic initiative and we’re proud to be a part of it here in Leeds. The visits mean so much to the children and to their parents, it really gives them a greater understanding of their hospital treatment and what happens behind the scenes.  It also means a great deal to staff who really enjoy getting to know the patients and their families.”

The Trust is aiming to roll out the programme in full with another visit already booked this month.