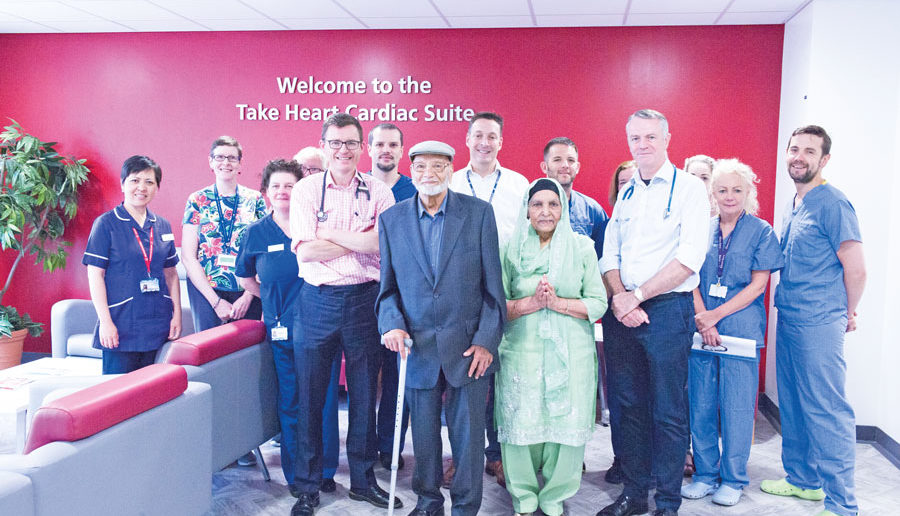 As the NHS celebrates its 70th anniversary this month, the Leeds TAVI team look back on ten years of this life-changing procedure.

TAVI, or Trans-catheter Aortic Valve Implantation, allows the aortic valve to be replaced without the need for open-heart surgery. This has enabled many patients who could not have such major surgery to be treated, while many others can now have a new valve under local anaesthetic and be home within one or two days, enjoying a new lease of life.

The first Leeds TAVI was done in 2008 and the Leeds team have performed more procedures than any other centre in the UK, with well over 1,000 patients having benefitted from this revolutionary treatment.

One of the very first patients to undergo the TAVI procedure at Leeds General Infirmary was Mohinder Punglia, 85, from Huddersfield, who needed a new valve, but in whom open heart surgery in Sheffield could not be performed.

Mohinder’s wife spoke of her grateful thanks to Dr Blackman and the team for providing this life-saving surgery.

She said: “It was quite an overwhelming time but I knew the operation would be the best chance to improve Mohinder’s quality of life. After the open heart surgery was unsuccessful, Dr Blackman said TAVI might work. It’s amazing what they can do and we are so grateful to the team for everything, without it my husband might not be here today.”

Dr Dan Blackman, Consultant Interventional Cardiologist and TAVI lead for LTHT, said: “TAVI is still a relatively new procedure but offers major benefits over more traditional open heart surgery. It is great to be celebrating ten years of TAVI with the team and Mr Punglia and his wife as the NHS celebrates its 70th anniversary.”

Over the course of ten years the TAVI procedure has evolved considerably, with new valve technology, shortened procedure times, and the introduction of nurse-led sedation so that procedures can be performed without an anaesthetist, with patients wide awake but entirely comfortable throughout. These developments have led to major improvements in outcomes and seen hospital stays reduced from seven to ten days to just two or three.

Mr Punglia said: “The whole team have been absolutely wonderful and I can’t thank them enough for everything they have done for me.”