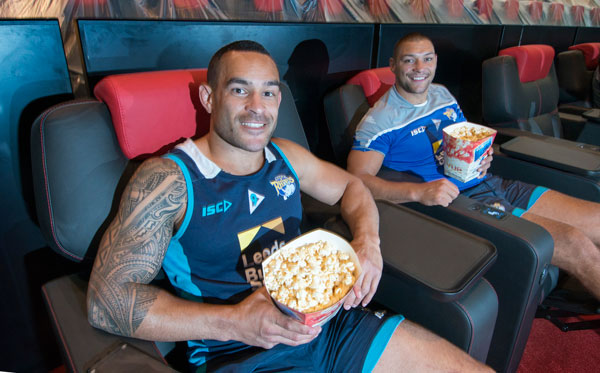 Thirteen players from Leeds Rhinos, offered a helping hand at Vue Leeds Kirkstall Road to help deliver a new state-of-the-art IMAX® screen, weighing in at over 200KG, and 50ft wide by 27ft high.

The IMAX auditorium is custom-designed to bring the audience closer to the action, regardless of where they are sitting. IMAX’s advanced projection system delivers mind blowing, crystal-clear images and the supersized floor-to-floor, wall-to-wall curved screen maximises the field of view to create a more immersive viewing experience.

Rob Parker, General Manager of Vue Leeds Kirkstall Road, says: “We are incredibly excited about the launch of the new IMAX cinema and look forward to welcoming film and entertainment fans from Leeds and beyond through the doors. Vue Leeds Kirkstall already boasts the most advanced in-cinema digital technology, but this means we will offer an even greater choice of films and event cinema including live music concerts, sporting events, comedy, opera, ballet and theatre productions as well all the latest 3D releases.”

The new 197 seater IMAX cinema will offer three levels of seating – standard, VIP and new to Vue Luxury seats – a fully reclining, wider seat that provides ultimate comfort to the consumer. Tickets to the new IMAX cinema range from £14.99-£19.99.

The introduction of the new IMAX auditorium will ensure that Vue Leeds Kirkstall Road continues to provide cinema goers with an unrivalled entertainment experience. It will sit alongside 8 existing Vue screens which offer disabled access and seating as well as the latest Sony 4K digital projection and Dolby 7.1 surround sound throughout. The IMAX auditorium opens with the release of Mission Impossible: Rogue Nation, which runs until the 14th August, followed by the release of Pixels and The Man From U.N.C.L.E.

Tickets can be purchased at www.myvue.com