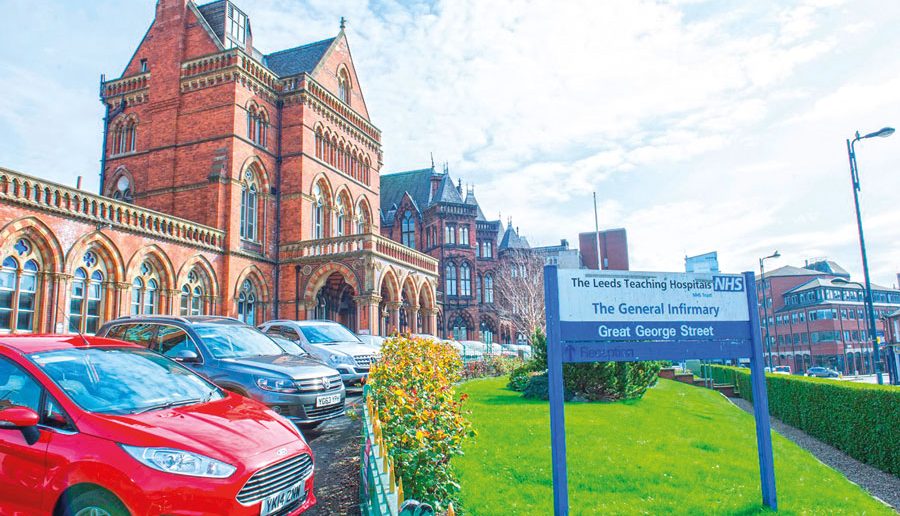 An exhibition to commemorate the 150th anniversary of the completion of the Leeds General Infirmary (LGI) has opened.

The ‘new’ LGI building was designed by renowned architect, Sir George Gilbert Scott, who also designed St Pancras Station in London. It originally opened for its first six months as an art gallery to raise funds towards the cost of the building.

The exhibition showcases a selection of historical paintings that have been uncovered in the hospitals’ archives.  The oil paintings feature the most famous clinicians from before the last 70 years and these can be viewed in the Great George Street main entrance.

As part of the exhibition, a Pott’s of Leeds Clock, created to mark the opening of the hospital 150 years ago, has been restored and returned back home where it is now proudly displayed at the top of the grand steps.

A number of walks were held by The Leeds Civic Trust, providing a tour between some of the commemorative medical blue plaques in the city. This was a great opportunity for NHS staff and the public to find out more about the rich history of the hospital and its leading role in Leeds. For anyone that couldn’t take part on the day a self-guided walk is available online to plan a historical tour of the plaques.

The West Yorkshire Archive team have uncovered a large selection of photos showing life in hospitals before the NHS started. The LGI collection is now available online for the public to view as part of an archive catalogue. A study showcasing the photographs and descriptions of the medicinal plants and herbs carved into the ceiling at the LGI is also available online.

A series of posters have been created to highlight some of the amazing clinical staff who, since the inception of the NHS, have built on the clinical reputation of their predecessors to deliver the highest quality patient care and innovation.  This has brought them and the hospital national and international recognition.

All of these clinicians were very highly regarded by their peers and by patients. They all had big personalities and all made a major contribution not only to the reputation of the Leeds General Infirmary but to that of healthcare nationally and internationally through their commitment to the training of junior staff, their research outputs and their innovative clinical practice.

Interspersed with the information about the clinicians are extracts from the annual meeting of the British Medical Association (BMA) held at Leeds General Infirmary in 1869, the year the new hospital opened to patients.

The exhibition is part of a year of celebration which began in October 2017 for the 250th anniversary of the founding of the original Leeds General Infirmary. A timeline of the history of the hospital is permanently situated in the blue link corridor between the original part of Leeds General Infirmary and the Jubilee Wing, the newest part of the hospital.

Julian Hartley, Chief Executive of Leeds Teaching Hospitals said: “I would like to thank everyone who has contributed to this exhibition and made it possible. It’s great to be able to showcase the rich history of the Leeds General Infirmary to the public and recognise how much the hospital has achieved over the years.”

This project has been generously funded by the Leeds Hospital Charitable Foundation who have collaborated as part of the re-launch of the charity.

David Welch, Chief Executive of Leeds Hospital Charitable Foundation adds: “We’re delighted to be a part of this fantastic project which really showcases the wonderful history of the hospital. Philanthropy has a huge part to play in the identity of our charity and this exhibition is a fantastic opportunity for everyone to see the journey of how the infirmary has grown into the respected icon it is today.”

For more information including links to the posters and access to the archives of the Leeds General Infirmary please visit;

The exhibition will be open for the public, patients and visitors to browse until Friday 29 June between 9:30-15:30. It is located in the Great George Street entrance which can be accessed from Jubilee and Brotherton wing entrances.