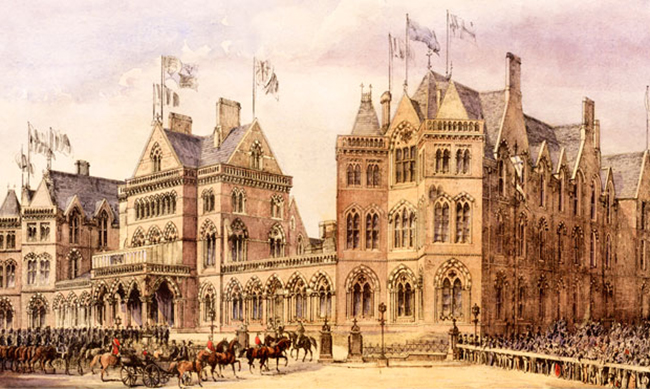 The people of Leeds, as in the rest of the country take the NHS and our hospitals for granted. If we are ill, we will be treated. But what did people do before the advent of modern medicine and the National Health Service?

The life of a working class person back in the 19th century was a difficult one. Wages were extremely poor for long, hard working hours, and families often lived in squalid conditions while trying to feed many children on meagre portions of food. Often, children would end up in the workhouses, as their parents were unable to feed them. People would often drink quite heavily in order to ‘drown out’ their misery and this combined with little or no sanitation and hygiene meant disease was rife.

A full row of houses sharing a single privy and factories filling the rivers with their waste all added to the chances of being struck down with diseases such as cholera, dysentery and typhoid. The mortality rate during this time period was extremely high, with infant death being a common occurrence due to disease and malnutrition. There was an evident need for better medical treatment and facilities.

One person who worked hard to improve medicine in Leeds was William Hey, an eminent surgeon and fund raiser in the area who was described as a ‘kindly saviour of the sick’. He improved his skill as a surgeon and knowledge of anatomy by dissecting criminals who had been executed at York. Hey was one of the founders of Leeds Infirmary and previous to it being built had been running a ‘hospital’ from his home on Kirkgate.

Another person of note at this time was pioneer of nursing, Florence Nightingale who became a national advocate for better health services following her service during the Crimea War. Ten times more soldiers in the field hospitals died from disease than from their battle wounds due to overcrowding, poor hygiene and defective sewers. Florence Nightingale noted their diets and improved ventilation, as well as calling in the Sanitary Commission to flush the sewers. Nurses at this time were considered to be uneducated and ignorant and simply used as a type of ‘maid’ for the doctors. They were there to fetch and carry, clean and tidy, not to care for patients at all, but Florence fought to change this on her return to Britain by setting up a nursing school and writing the first book of its kind “Notes on Nursing”. This ‘Lady of the Lamp’ as she was fondly named for her night rounds during the war, was to consequently advise on the design of future hospitals in regards to adequate ventilation and facilities. This included the Leeds General Infirmary.

The Building of Our Hospitals

The first Leeds General Infirmary was not on the site it currently is today, but was opened in 1771 on Infirmary Street near City Square. This first hospital was designed by John Carr of Horbury, most famous for designing Harewood House. The building was almost continually extended in order to keep up with demand until its demolition in 1893.

Sir George Gilbert Scott designed the new infirmary on which construction started in 1863 – 30 years before the demolition of the original hospital. His design was submitted following a trip to France accompanied by Dr Charles Chadwick to see what sort of hospitals Europe had. May 1869 saw the building become a fully functioning hospital. The new Infirmary cost £100,000 to build, and had the latest innovations such as hydraulic hoists to aid nurses in their work, and was fitted with many baths and lavatories.

On 19th May 1869 the hospital was officially opened by the then Prince of Wales, who later became King Edward VII. However, for the first year the building was used for the ‘National Exhibition of Works of Art’ in order to give time to move services from the old hospital and also to raise vital funds. George Corson, the designer responsible for some of Leeds best known architecture such as The Grand Theatre, and the Municipal Buildings added another building to the hospital in the late 19th century. The LGI has since been added to many times over the years.

St James’s University Hospital started out life as several different buildings. On a field purchased in 1845 the Leeds Moral and Industrial Training School was built. The children housed at the school were expected to work at shoe – making for nine hours every day and it was a far from perfect solution to housing the poor. One of the headmasters Revd Charles H Nicholls was said to “allow himself to get into such a state with the children that he foamed at the mouth”. The school building now forms part of the Lincoln wing of the hospital.

In 1861 a new workhouse designed by William Perkin and Elisha Backhouse which included an infirmary and chapel, was built next to the training school. This was extended over the years to include a larger infirmary, nurse’s home and what was referred to at this time as an ‘imbecile’ block. Back then this would not have been a derogatory term. By the end of the 19th century all the buildings were mainly used for medical treatment of the poor. The hospital became known as Leeds Union Infirmary and the building that was once the Workhouse is now the Thackray Medical Museum.

The Leeds Union Infirmary changed to the East Leeds War Hospital during WW1 and was used to treat soldiers and other armed forces personnel. The hospital was then later renamed St James’s, allegedly after the former Medical Superintendent of the Leeds Union Infirmary Dr James Allen, and also for Sir James Ford from the Leeds Board of Guardians who had overseen its conversion from the workhouse to hospital.

Back when these two hospitals were built, medical treatment was very different to what it is today. General anaesthesia was very crude, with ether being routinely given to patients. Following its first use by Edinburgh obstetrician James Young Simpson in 1847, chloroform then became widely used but ether was soon back in favour as chloroform was found to cause heart problems. These early anaesthetics did however mean that childbirth was less painful than it had been, and more sophisticated surgery could be attempted along with the traditional amputations. Surgery was still a very risky business due to infection. Around the time of our hospitals appearing though, antiseptic procedures were improving and the sterilisation of whole environments led to much reduced mortality rates following surgery. The late 19th century also saw traditional opiate based pain killers become replaced with the development of aspirin.

World War 1 saw many soldiers die in hospital from infection in their wounds, rather than the injury itself. Antiseptics were used but with little effect, often exacerbating the problem rather than helping.

An accidental discovery by bacteriologist Alexander Fleming would ensure this would not happen again.  “When I woke up just after dawn on September 28, 1928, I certainly didn’t plan to revolutionise all medicine by discovering the world’s first antibiotic, or bacteria killer,” Fleming was later quoted as saying “But I suppose that was exactly what I did.” Fleming was investigating the bacteria Staphylococci and stacked his petri dishes untidily before going on holiday with his family. On his return he found a fungus growing in one of the dishes and noticed that the staphylococci immediately surrounding it had been destroyed. After several months of studying the ‘mould juice’ as he called it, he released the substance named penicillin on March 7th 1929. Fleming faced several problems producing penicillin but finally it went into mass production after the Pearl Harbour bombings. By the end of WW2 penicillin had been produced in such a quantity that there was enough to treat all the wounded soldiers in the Allied forces.

Towards the end of WW2 there was talk of social reform and the need for a welfare system in Britain. In July 1946 the National Health Service Act was published. Two years of debate followed with the majority of doctors being opposed to the NHS. On July 5th 1948 the NHS was finally created and Aneurin Bevan (the Minister of Health) said “This is the biggest single experiment in social service that the world has ever seen undertaken.”

The two hospitals in Leeds have often been at the forefront of pioneering medical treatment. St James’s was once the largest teaching hospital in Europe, and was the location of the first living – related donor liver transplant on the NHS. The hospital is one of 6 centres conducting liver transplants.

The latest addition of the Oncology building, the Bexley Wing was opened by HRH The Princess Royal on 17th July 2008. This state of the art building is one of Europe’s largest cancer centres and is the leading centre in the UK for undertaking highly advanced Stereotactic Ablative Body Radiotherapy (SABR). This technique benefits patients with potentially curable lung cancer for whom conventional surgery is too risky. Patients travel from across the country to receive this special treatment which can deliver the same radiation dose in 3-8 treatments compared with 20-30 treatments using conventional technology. This is due to the two highly advanced ‘research linear accelerators’ originally funded through the Yorkshire Cancer Centre Appeal.

The Leeds General Infirmary is the home of the first successful hand transplant in the UK. The eight hour operation led by Professor Simon Kay was performed on Mark Cahill from Halifax on the 27th December 2012. A press release at the time said “In a new development internationally, the recipient’s hand was removed at the same operation as the donor hand was transplanted. This allowed very accurate restoration of nerve structures and is believed to be the first time this approach has been used. The techniques used in transplantation called upon the experience of the team at Leeds General Infirmary, who have some of the world’s greatest expertise in microvascular surgery.”

The LGI is also home to the Leeds landing pad for the Yorkshire Air Ambulance which was introduced in April 2000. The Air Ambulance is based at Nostell Priory, near Wakefield and is able to quickly reach casualties and air lift them to hospital. It is particularly useful for attending road traffic accidents and when patients are in very rural places difficult to reach by road. One of the most famous patients air lifted to the LGI is Top Gear presenter Richard Hammond when he was involved in a near fatal jet powered car crash at an RAF base near York.

Both hospitals in Leeds have a rich history which is clearly evident today in the much varied architecture. St James’s University Hospital proudly shows off its Victorian roots with the elegant Thackray Museum building, along with the red brick utilitarian design from the whole site redevelopment in the 60s-70s.

The LGI is also an eclectic mix of architectural styles, ranging from the 1869 Gilbert Scott Chapel, through to the gloriously striking Art Deco influenced Brotherton wing opened in 1940.

I’m sure the hospitals will remain at the forefront of medical advancement for many years to come under the Leeds Teaching Hospitals NHS Trust. The residents of Leeds are extremely lucky to have access to such pioneering treatment, delivered by some of the country’s top experts right on their doorstep. Long may it continue!