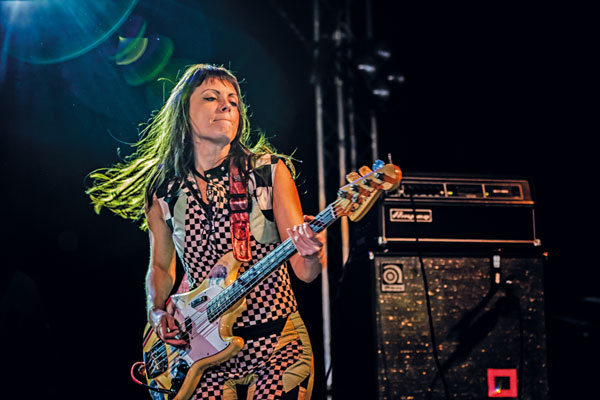 It has almost become a tradition at Leeds festival that it will start raining on Thursday, the site will be a quagmire by Saturday but people will be hugging each other in the sunshine by Sunday like survivors of a natural disaster. However, 2015 saw the weather be kind for almost all of the weekend.

This year, the script was thrown into the air. Friday’s acts basked in glorious Mediterranean sunshine one minute blustery showers the next which rather did for all pre-written eulogy to the joys of Bramham weather! The Skints, who opened the day up just got on with it as they are apt to do.

This festival isn’t known for curveballs, but it threw a whopper with the mighty Skints. The multiracial, male and female ska-punks played what they call “east London reggae” protest music in the Radio 1 tent – usually the most indie of them all – and brought the house, or should that be tent down. Who would have expected that?

And once again it was suddenly about the music and the infernal clashes! However, nothing can quite dampen the atmosphere of a festival that has become something of a rite of passage for a younger crowd, many of whom were celebrating their GCSE results by experiencing the thrill of live music, painting themselves brightly and dressing up as animals for the first time.

Thus, Friday headliners The Libertines might not be everyone’s cup of tea but they were perfect for this environment. Controversial and always ready to confront the establishment Pete Docherty’s juvenile but rowdy songs had the entire field singing.

Metallica are an undeniably heavyweight Sunday headline. Playing what they have suggested will be their last gig for some time, their career-spanning, hit-packing 90-minute set is perhaps predictable although the pyrotechnics used were probably enough to light up a small town for a year or so: And thus you could say the festival ending with a bang although there was a few damp squibs in-between. BabyMetal looked lost on the same big stage for example. Not their fault that they have been dubbed the saviour of heavy metal when clearly they are nothing more than a bit of a novelty act.

Otherwise, genuinely big names were a little thin on the ground and it was only last year their counterparts Royal Blood and Marmozets appeared much lower down the line-up. Their sets were a triumph of showmanship as well as a landmark for Marmozets lead singer Becca Macintyre, who – shockingly – is the first British female to play this festivals main stage since Shirley Manson’s Garbage rocked the Leeds site on a Sunday night in 1998.

Nonetheless, the story of the weekend was the return of affection for new singalong guitar bands.

The Last Internationale, Black Honey and Little Comets being a case in point.

Llandudno’s Catfish and the Bottlemen look like archetypal floppy-haired indie types, but their combination of ready-made anthems and hurled beach balls had the crowd abandoning all decorum to clamber on each other’s shoulders. There was a similar triumph for Scots rockers Twin Atlantic, whose arm-waving mix of Biffy Clyro and Bon Jovi – Biffy Jovi, perhaps? – is earnestly stomping towards festival ubiquity.

While the festival may be witnessing various shifts in direction, there will always be a warm welcome for guitar bands who soundtrack the act of chucking cider in the air, especially when – like Saturday headliners Mumford and Sons seen as a bit of an odd choice but they performed with gusto and the predicted heckling never materialised

By Sunday, the site bears witness to an epic, increasingly fascinating battle between genres. Guitar heroes Ash unites the generations when a resplendent set ends in a mass singalong. Ghost demonstrate that guitars can make dance music too, and make a cheeky bid for universal appeal by dedicating their terrific set to “everyone on a three-day bender, all the single mums”.

Leeds Festival is Leeds Festival: The content hardly changes in terms of the genre of music, although it does keep evolving in terms of the music played on the smaller stages: Moreover, the most important bands will have played in the smaller tents early in the afternoon bands such has San Fermin, Sunset Suns, Circa Waves, Pvaris, Shura, Manchester Orchestra and Years and Years because these bands will undoubtedly be on the main stage extolling the virtues of the weather in the not too distant future.