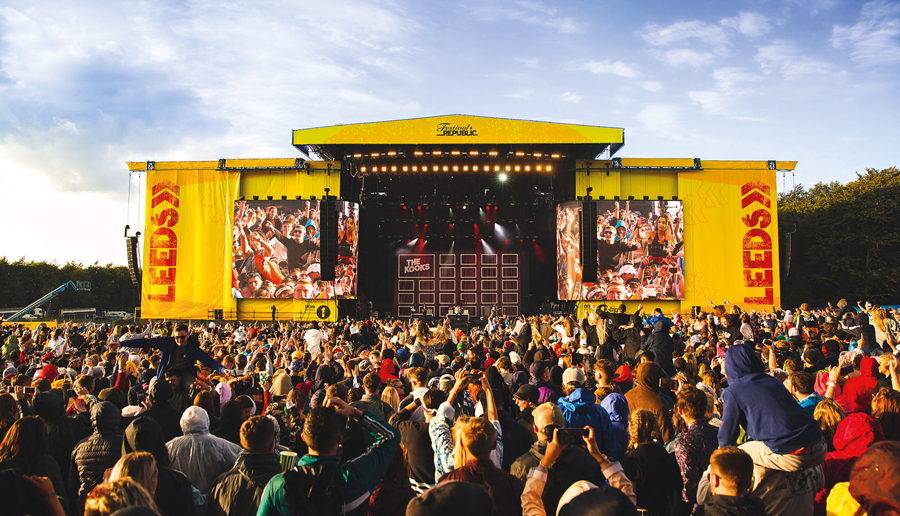 Leeds Festival happened again. However, this year’s festival largely went under the radar. Gone, it could be argued, are the days when Leeds Festival was the place to be at the end of August and tickets were needed months in advance of the event. Maybe, the festival has become too eclectic in terms of who appears on the various stages. Perhaps the danger is that the festival now tries to appeal to a wide clientele and falls between the stools. The festival has changed from a “rock” festival to the point where it has lost its rock audience and yet the diversity to now be a “music” festival is simply not diverse enough for “music” fans. Gone it would seem are the days when you could stand in a field all day and know that whoever appeared you would sort of like.

Thus, Friday needed to be a setter for the whole weekend. Sadly, this was not the case. The main stage provided largely lack lustre content for most of the day. The Joy Formidable being the exception. The Welsh rock trio returning with yet another huge step forward, in the shape of upcoming fourth album “AAARTH”. Propelled by their restlessness and curiosity, the band with inventive and aggressive guitar music, should have given impetus: Sadly, none of the other main stagers took up their baton.

Kings of Leon perked things up a bit as a Friday headliner should. The multi-platinum selling band has had five singles on the Billboard Hot 100 chart and they were all there.

The best on offer though was early on the BBC 1 Stage where Let’s Eat Grandma, one of the most creative and exciting bands in the world right now, followed a blistering set from Leeds very own Marsicans. whose driving, harmony-laden sound and exciting live shows are earning them a reputation as an emerging force in British music.

Saturday was, like the weather, better. Moreover, it was more like Leeds of old with the rather splendid Fall Out Boy headlining to a fully laden field. Most recently nominated for a 2018 MTV Video Music Award for Best Rock Video for ‘Young and Menace’ – they have cemented their position as one of rock music’s biggest-selling bands. They delivered a set full of pomp and devilment. They were ably supported by The Kooks all deft hooks and playful energy: Creeper who in a world where so many bands are content to cower amongst the safety of the middle of the road, they are driving on an entirely different street altogether. The day was almost stolen by the perfectly imperfect – just one way to describe LA based punk act, The Regrettes. Writing songs that proudly bear a brazen and unabashed attitude in the vein of acts Courtney Barnett or Karen O – with a pop aesthetic reminiscent of 50’s and 60’s acts a la the Temptations or Buddy Holly – the LA based band create infectious, punk driven tracks.

There were also some stonking sounds on the other stages too. Wolf Alice have become a stalwart of the festival- this was their third appearance in three years. However, their popularity has not diminished, and this was probably their finest hour. Fickle Friends, the hardest working band in shimmering, unapologetic ‘80s–inspired indie–pop.

Following in the slick footsteps of Phoenix, Haim, Two Door Cinema Club, Fickle Friends are the essential new British pop band. Rae Morris showed she has a flair for writing uplifting, yet emotion-wrenching, indie-electro-pop and judging by those who went to see her, bigger stages await the Blackpool lass!

Sunday needed to be full of pizzazz but it was not provided by Kendrick Lamar. A strange decision to end the festival with. Indeed, it was overall as damp as the rain which fell throughout the day. It was a day to spend inside a tent, but you needed to be patient. Those who were found reward in the fabulous Sunflower Bean: Pale Waves and Kate Nash at The Festival Republic stage. Elsewhere under cover was the sensation of the year Sigrid. And if you needed energy to restore your faith in rock music you had Papa Roach. It was, if truth be told a little thin to ensure that Leeds Festival 2018 would live in the memory for long. Leeds Festival will if it is not careful lose its uniqueness. Some people will still see it as a rite of passage but whether that can sustain Leeds is another matter.