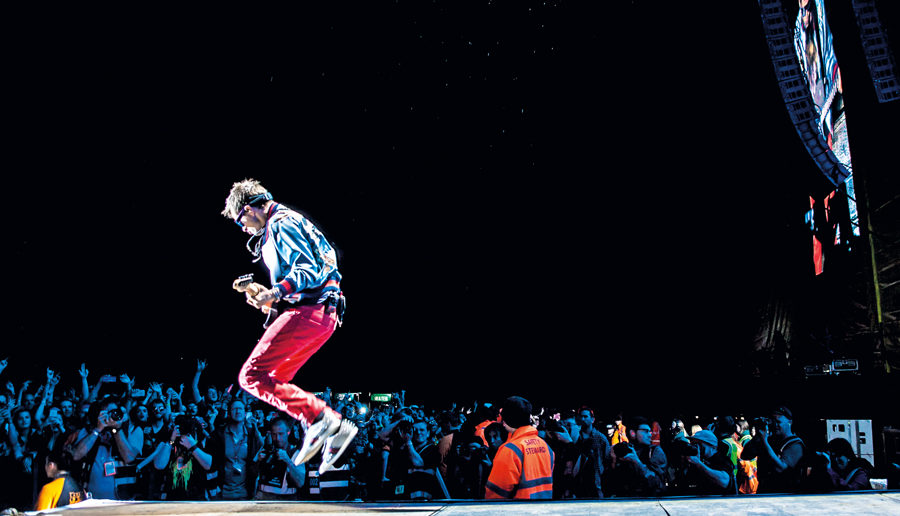 Put simply Leeds Festival 2017 was the best ever held at Bramham. Fans left the festival with iconic moments indelibly stamped in a collective memory that were for once not drenched in rain and mud. Muse were the first headliners for this year’s festival. Stadium rock royalty, Muse are one of the most influential and revered live bands of modern times. Led by the commanding presence of front man Matt Bellamy, the trio brought to the biggest stage their interstellar anthems, and their return to Leeds was yet another landmark moment in their storied career. A complete and utter triumph for the band: However, lower down the bill on the first day’s main stage three bands took the festival goers by surprise. Powered by catchy, upbeat melodies and the strong voice of frontwoman Chrissy Costanza, Against The Current dominated their first ever Leeds performance with tracks from this year’s excellent debut album In Our Bones. They were joined by the equally momentous return of While She Sleeps, British metalcore’s undeniable DIY heroes who destroyed eardrums with tracks from their third album You Are We. A word too for Pins: The Manchester female quartet accumulated high praise for their debut album ‘Girls Like Us and a growing fanbase is assured after blowing the sizable afternoon main stage crowd away with a mesmerising performance. As is the way with such a gargantuan festival not all the jewels were on the main stage. Halsey, Charlie XCX, SLOTFACE, Phantogram and Ash all pulled sizeable crowds in the tents. The BBC Introducing Stage also drew people along: A stage played by Ed Sheeran a couple of years ago this year’s potential superstars are The Pale Waves from Manchester so assured for ones so young and Queen Zee and The Sasstones. Described as ‘neu-punk’, the band’s sound is a clash of opposite genres as they combine the fun of pop music with the attitude, mentality and reputation of punk. Already boasting a phenomenal line-up of indisputable headliners and the hottest voices in modern music on Friday and Sunday, Leeds arguably, slid a little on Saturday main stage wise even though Deap Vally, Bastille and Kasabian gave phenomenal sets. The stand out performances were found on the smaller stages. Marika Hackman consciously wanted to turn up the volume in the studio, to live out her teenage fantasy of fronting a raucous band. “I wanted to let rip and lose control. That’s the kind of music I’ve always wanted to make. When I was younger I wasn’t looking at Joni Mitchell. I was looking at Nirvana thinking, ‘I wanna be like that”! Surprise hit of the day were Oh Wonder. In an era in which pop careers require careful planning, Oh Wonder are an anomaly. They’re a band formed by accident not design, a duo who didn’t intend to play live but spent more than a year touring the world, and a major label act who never saw this being anything other than a DIY project. They stormed Leeds Festival leaving everybody who saw them drooling.

Sunday was all about one man. Consistently seen as one of the greatest rappers of all time, Eminem is not only a titan in hip-hop but in modern culture itself. One of the biggest selling artists of the 21st century, his razor-sharp wit and impeccable larger than life anthems continue to defy boundaries, with the likes of ‘Lose Yourself’, ‘My Name Is’, ’Not Afraid’ and ‘The Monster’ all storming charts and record collections around the world. Still at the top of his game, his return to Leeds marked an extremely rare opportunity to witness an icon in the flesh, with a set that’ll add another legendary chapter to the story of Eminem. Some would say Sunday saw one of the greatest main stage line-up ever in Leeds. Backing up the legend of Eminem were undeniable alt-rock sensations Pvris who laid out their marker as the hottest name in emerging rock. A standout success story of 2016, Blossoms have established themselves as national treasures with the release of their self-titled debut. Stockport’s finest brought their pop-laden anthems to Reading and Leeds this summer in a performance that marked the next generation of arena-sized icons. Lead by the unmistakable voice of Taylor Momsen, The Pretty Reckless returned to the festivals this year, armed with heavy blues-laden anthems of latest album Who You Selling For. Joining them in triggering mass singalongs were emo-soarers Moose Blood, melodic-rock five-piece Mallory Knox, and punk smashers Marmozets who unveiled their invigorating new era after the riotous success of debut album The Weird and Wonderful Marmozets.

Leeds 2017 left you breathless and exhausted and nobody but nobody, mentioned the weather!