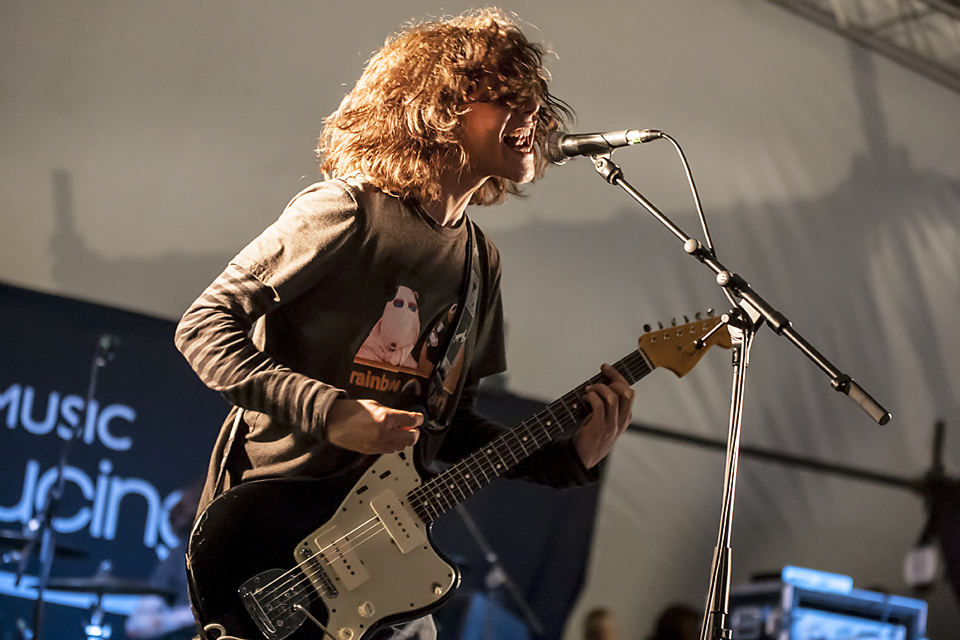 It has to be said that a festival in the UK isn’t really a festival until the rains come. However, the good thing is that Thursday nights deluge is, according to the forecast the only major precipitation that Leeds Festival will have was in the prelude to the main festival starting. Not that the rain managed to dampen the spirits of the early birds who had ventured to Bramham Park and were treated to a pre-festival feast at the BBC Introducing/Dance To The Radio stage: Indeed, the evening was rounded off by a splendidly chaotic and boisterous set by Blood Red Shoes. The duo know you don’t need a whole string section to denote emotion or a whole horn section to do rousing. Great stuff. Ably supported by The Wytches, who seem to becoming the marmite of British rock. Freak and punky Blackwaters: Opening up, and therefore strictly speaking the first band of the festival were Leeds band Forever Cult making quite a name for themselves with their fuzzed-up grunge poppers. A sampler for all the great things to come at Leeds Festival 2016
[metaslider id=9122]

Friday and the highlights on the main stage will undoubtedly be Kilmarnock’s finest Biffy Clyro a mind boggling mix of off kilter tempos and unpredictable guitars and Fall Out Boy who have cemented their position as one of rocks music biggest selling bands. However, State Champs who open the main stage will give the boys a run for their money. Not that all the fun is confined to the main stage. The other seven stages of the festival have some of the best music around: Savages hit the NME stage with a string of accolades this year. Their LP Adore Life is one of the records of the year and live expect a few fireworks. There has been a buzz about Liverpool band Clean Cut Kid for quite a while now: arrive at a time when even the most optimistic, glass-half-full sort of person has started to fear that pop as a currency, as a conduit for emotion, truth, complexity and daring, has been cheapened to the point of no return. Sure, Clean Cut Kid’s songs possess the whip smart immediacy of classic radio pop; Catch them on the Festival Republic stage

Finally, Please join in paying tribute to Warrington band Viola Beach and their manager Craig Tarry, who we sadly lost earlier this year. It was on the BBC Music Introducing stage at Reading & Leeds where the boys played one of their earliest festival sets, showcasing their irrepressible energy and huge potential. The festival will be dedicating a moment on the Main Stage to the ‘boys that sing’, whose lives were tragically cut short. Join us in celebrating their memory at Leeds on Friday at 17:35
Friday day tickets are still available for Leeds: See http://www.leedsfestival.com/ for further details gates are at 11am