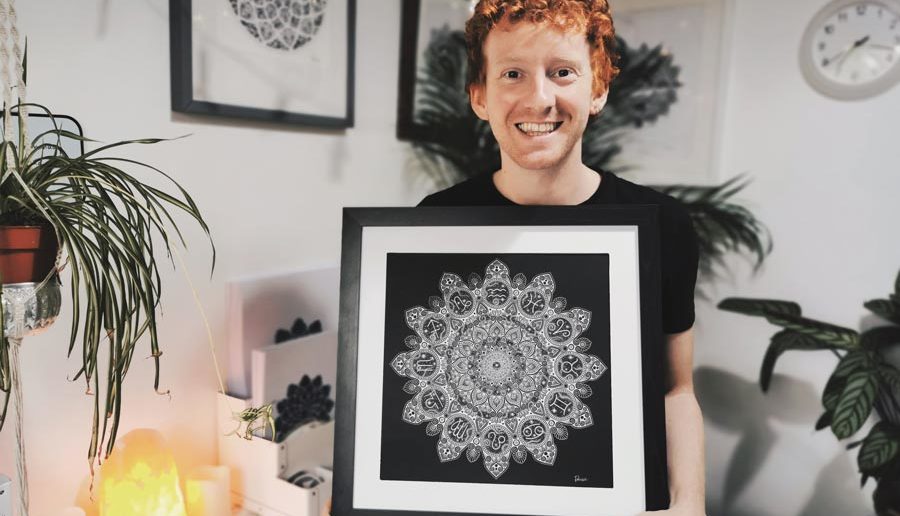 LEEDS-based Robbie Cook wields his design skills to fundraise for The Brain Tumour Charity in memory of his mother.

Robbie’s mother Ellen first fell ill in April 2019 whilst on holiday in Italy, where she started to suffer from memory loss, headaches and depth perception problems. A biopsy revealed that she had a multiforme glioblastoma, and she was told surgery wouldn’t be possible because of the aggressive nature of her tumour.

Robbie, 26, artist, from said: “The doctors told us she had anywhere from a few months to a few years left. She was an immensely strong woman and tackled the illness with her usual unrelenting positivity.

“Just the day before she passed away she was camping in the Dales with my family and had gone for a long walk along the river.

“But in the space of 24 hours she became increasingly confused and was taken to St James’ Hospital in Leeds, where she passed away on July 25th after a three and a half month battle.” Robbie has spent the last year coming to terms with his mother’s passing, and is now focusing on fundraising. He decided in January 2020 to use his talent for design to throw a charity raffle for The Brain Tumour Charity.

“I wanted to make a positive difference to the way brain tumours are researched and tackled, much as my mum would have done given the circumstances.

“I needed to create something that would appeal to my audience on Instagram and that I would enjoy making at the same time, so I went with a piece based around star signs. I posted pictures of its progress so I could gather momentum for when I announced the raffle, and the feedback I got was fantastic.

“Having recently invested in a rotring isograph pen with white ink (such a good buy), I figured I could create a piece on black card and fill it with the zodiac signs surrounded by stars like they were floating in space. From there the idea just developed by itself.

“I never plan too thoroughly what I’m going to do with a design. Once I have a concept I just put pen to paper and see what happens naturally and this is what I ended up with.

“I’m not one to usually share my personal life on social media, but after explaining why I was doing this project I got so many beautiful messages from people saying they had been through similar things and wanted to participate.

“Towards the end of my raffle I also shared my project on my personal Facebook account and that really helped my growth. It was lovely reading messages from people I hadn’t spoken to in years who remembered my Mum so fondly.”

Robbie planned to run the Leeds 10k this summer to continue to raise funds for brain tumour research and treatment. When this was put on hold by coronavirus, he doubled down on his efforts to fundraise with his design skills.

He now plans to produce a limited range of tote bags using the same star sign design, and will donate 100% of the proceeds to The Brain Tumour Charity.

Helen Rogers, community fundraiser for The Brain Tumour Charity, said: “Robbie’s artistic skill is incredible and raising funds in memory of his mum in this is such an inspiring story.

“Brain tumours are the biggest cancer killer of the under 40’s and survival rates have not improved significantly over the last 40 years. We are leading the way in changing this by fighting brain tumours on all fronts.

“We receive no government funding and rely 100% on voluntary donations, so it’s only through the efforts of people like Robbie and his family and friends that we can change these shocking statistics in the future.”

The Brain Tumour Charity is the UK’s largest dedicated brain tumour charity, committed to fighting brain tumours on all fronts.

They fund pioneering research to increase survival and improve treatment options as well as raising awareness of the symptoms and effects of brain tumours to bring about earlier diagnosis.

The Charity also provides support for everyone affected so that they can live as full a life as possible, with the best quality of life.