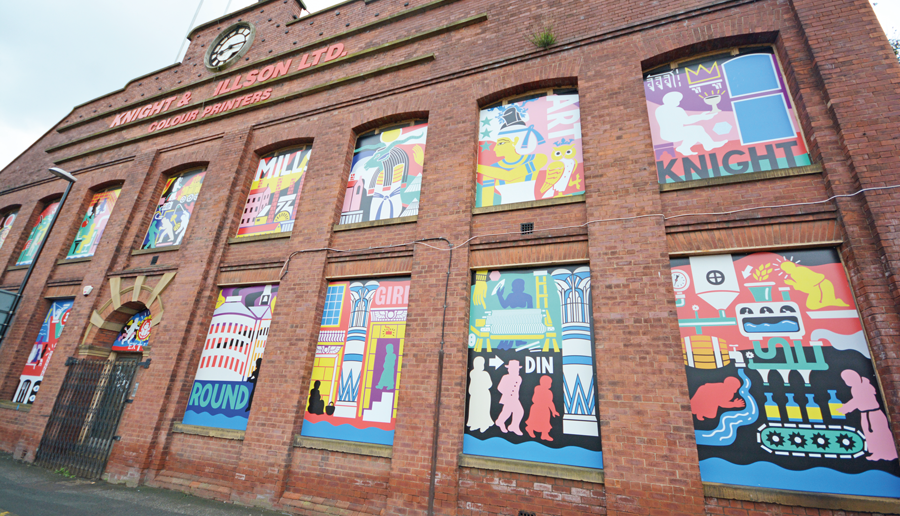 The project led by Leeds City Council and supported by property investment and development company CEG, is part of a scheme to revitalise this area of South Bank. Further works of art, in conjunction with Northern Monk Brew Co. will be unveiled over the coming weeks on the CEG South Bank site, providing a vibrant backdrop to proposed events in the area this summer.

Leader of Leeds City Council Councillor Judith Blake said: “We are very pleased to have worked with CEG and Ian Kirkpatrick on this colourful and eye-catching new artwork in the South Bank. A key component of the South Bank regeneration is to make the public realm an attractive place for people to see and visit, and Ian’s mural which cleverly tells the story of Holbeck reflecting its industrial past along with its present and future does that perfectly using imagination and colour. We look forward to seeing the further works of art unveiled in the coming weeks.”

Drawing on the city’s industrial past Ian Kirkpatrick completed the mural following extensive research into the history and contemporary use of the area to tell a story. He said: “It’s actually designed like a large map. At the left of the designs you’ll see buildings like the upcoming HS2 train station and Bridgewater Place and at the right Holbeck Moor and the viaduct. In between I’ve depicted a cityscape that merges existing buildings alongside construction projects that have yet to happen. My hope was to bring Holbeck’s past, present and future together into a piece about cycles of growth, decay and regrowth.”

The mural was designed by hand as a single picture, before being retraced in Adobe Illustrator to create the clean lines and shapes for the 32 separate panels, one for each window of the building, part of which is currently occupied by tenant, Pharmaceutical Packaging (Leeds) Ltd’s thirty-strong team. The printing and installation work was undertaken by Dock Street Signs which is located in Leeds South Bank.

Jon Kenny, development director at CEG, said: “As our proposals for the redevelopment of this area of South Bank progress, we were keen to invest in some immediate improvements to the area. Ultimately, we will deliver a vibrant place to live work and enjoy with iconic architecture, inspired public realm and improved connectivity between the city and Holbeck and, in the short-term, existing communities will benefit from environmental improvements and interesting artwork depicting the fascinating history and landscape of Leeds.”

Ian added: “I was taking the train and was surprised by how visible the artwork was from the window. I’m excited to have created a piece of art that is part of the South Bank landscape. Public art can be very powerful because it gets seen by so many people – including people who otherwise wouldn’t interact with art. I’m really honoured to be part of the regeneration of this exciting area of Leeds.’