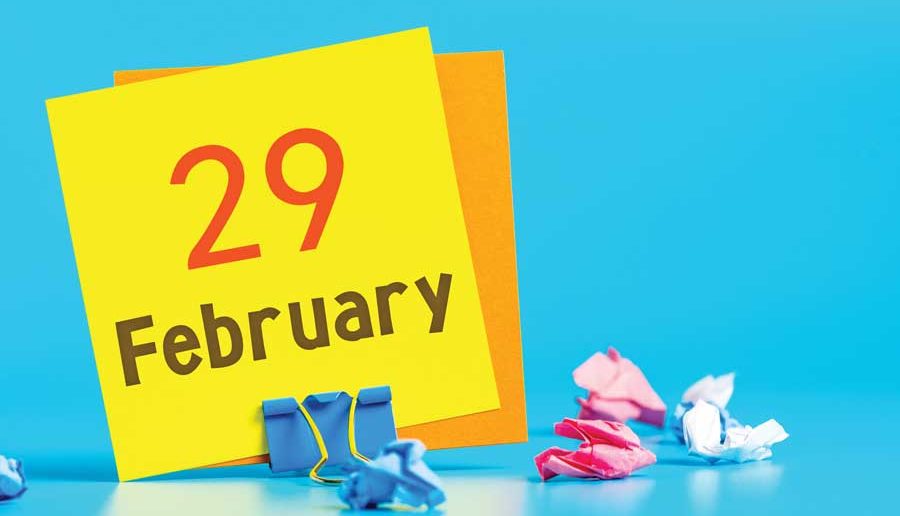 This year is a leap year, and of course that means that February has an extra day, ending on the 29th rather than the 28th. The name leap year is said to have arisen because in a normal year a date will fall on the following day to what it did the year before. However, on a leap year, it skips a day or ‘leaps’ over it. Have you ever wondered why we have leap years and when they occur? Who came up with the idea and is it the same all over the world? In this feature we ‘leap’ into the science, the history and even the folklore associated with leap years.

Leap years have 366 days rather than the usual 365, and they occur every 4 years – on years which are evenly divisible by 4. It gets slightly more complicated though when we look at century years as we only consider one out of every four of them to be a leap year. This is because the actual length of a year is 365.242 days – just short of 365.25. So, by adding an extra day every four years, over the space of 400 years, we accumulate an extra 3 days which we need to lose. We can work out the century years by remembering that if they are evenly divisible by 400, it will be a leap year. Therefore 2000 was a leap year, but 2100 will not be. Why does all this matter you may wonder, if we add a day here, and lose a day there? Because seasons and astronomical events do not repeat each year in a whole number of days, so our calendar starts to drift and no longer accurately tracks events over time. The Gregorian calendar is the standard one around most of the world and was designed to keep the vernal equinox on or close to 21st March. This way, the date of Easter remains close to the vernal equinox as it is always celebrated on the Sunday after the full moon on or after 21st March.

As with many things in our modern world, our calendar can be largely attributed to the Romans. Having previously used lunisolar calendars, to keep festivals occurring around the same season each year, they inserted a 22- or 23-day month every other year. The Julian calendar was developed by Julius Caesar in 46BC using calculations by his astronomer Sosigenes, which then became effective the following year, to simplify things. Days were added to different months of the year to create 365 days and one day added to Februarius every fourth year. February 24th was to be doubled but for legal purposes the two days were to be known as one day with the second half of it being the added. By 725AD Bede wrote that the added day occurred before the last five days of February.

This was then amended by Pope Gregory XIII in 1582 to simplify it slightly by making it so the leap year would fall on any year divisible by four. This became known as the Gregorian calendar which we use today.

Some countries or faiths around the world use a different calendar to the Gregorian, but all still need to accommodate the fact that the world does not complete one full revolution around the sun in exactly 365 days. The Bengali Calendar of Bangladesh, the Indian National Calendar and the Thai Solar Calendar are all organised to synchronise with or be close to the Gregorian leap day so that dates can easily be converted.

The Ethiopian and Coptic calendars work differently. They have 12 months of 30 days, plus they add five epagomenal days which make up a 13th month. The calendar year begins on August 29th of the Julian calendar and every four years they add a sixth epagomenal day at the beginning of their year. There is a gap of seven to eight years between the Ethiopian and Gregorian calendars stemming from an alternative determination of the date of the Annunciation. Because the Ethiopian and Coptic calendars do not skip a leap year every 4th century, the vernal equinox moves a day earlier every 131 years.

Lunisolar calendars (those which take account of the moon phases as well as the sun) insert an extra month, often called an embolismic month. The Chinese calendar always adds the extra month to ensure that month 11 contains the northern winter solstice, and they call the embolismic month the same as the previous one, just with ‘leap’ in front of it. The extra month in the Hebrew calendar is called ‘Adar Bet’ and is added seven times every nineteen years in years 3, 6, 8, 11, 14, 17, and 19 to ensure that Passover always falls in the spring.

The Solar Hijri calendar is the official calendar of Iran and Afghanistan. The Iranian Chronology is a succession of calendars which have been adapted and modified many times over the years to improve accuracy, and having being in use for over two millennia in the country previously known as Persia, it is one of the longest chronological records in human history.  The Iranian calendar begins on the spring equinox and adds an intercalated day to the last month either every fourth or fifth year over a 33-year cycle. The first leap year is the fifth of the cycle, with the other leap years occurring every four years for the remainder. Occasionally the 33-year cycle is broken by one of 29 years. It has been suggested to adopt a similar rule for the Gregorian calendar as there is less deviation to the vernal equinox with this method. It is not likely that this would be changed any time soon though as the timing would have to be right.

The most famous leap day tradition is that of women proposing to their partner. Of course, today women can propose anytime they wish, but historically it was the responsibility of the man to ask for a woman’s hand in marriage. This tradition is thought to have begun in Ireland during the 5th century when St Brigid of Kildare and St Patrick brokered a deal to balance the roles of men and women in a similar way that the leap day balances the calendar. It soon spread across Europe, but in Scotland, women who are planning to propose in this way are advised to wear a red petticoat showing to give their intended fair warning!

Another tradition is linked to the leap day proposal, in case of a refusal. Apparently originating from a law passed in 1288 by Queen Margaret of Scotland, any man refusing a leap day proposal could be issued with a fine. This varies slightly in other countries – men in Denmark must supply the spurned woman with 12 pairs of gloves to hide the embarrassment of not having a ring on their finger, and in Finland the man should provide enough fabric to make a skirt.

In Germany, there are traditions for May Day which alter on a leap year. On an ordinary May Day, young boys can leave a ribbon decked birch tree on the doorstep of their love, and on leap years girls can do the same for their crush. The traditional maypole dancing is enjoyed by both sexes but on leap years only women may dance.

Anthony on the Texas-New Mexico border in the USA is known as the Leap Year Capital of the World thanks to the four-day long festival held there to celebrate leap day. It was first created in 1988 when neighbours Ann Brown and Birdie Lewis who both happen to be leap day babies approached the council to create a festival to celebrate the quadrennial event. People now travel from all over the world to join in the frivolity.

Not all leap year traditions though are positive. In Roman times, February was a month associated with the dead, so in Italy it is seen that the leap day simply extends an already morbid month. In several places around the world the 29th February is seen to be unlucky. In Scotland those born on leap day are predicted to live a life of suffering and farmers also worry, saying ‘a leap year was never a good sheep year.’ Superstitious Greeks believe that a marriage taking place during a leap year will end in divorce.

People born on a leap day are known as ‘leaplings’ and for obvious reasons can only celebrate their true birthday every four years. On common years they choose to either celebrate on 28th February or 1st March. If they come of age during a common year, laws differ in countries as to when this happens legally – in the UK they must wait until the 1st of March but in New Zealand it is 28th the February. There is only a one in 1,461 chance of being born on a leap day and there are 5 million leaplings around the world.

There is a family in the Guinness Book of World Records for having three consecutive generations of leaplings. Peter Anthony Keogh from Ireland was born on 29th February 1940, his son Peter was born on the same date in the UK in 1964, and then Peter’s daughter Bethany also arrived to share the same birthday in 1996!

There have been some famous leaplings over the years, notably Pope Paul III born in 1468, Morarji Desai, a former Indian prime minister born in 1896, American singer Dinah Shore born in 1916, American baseball player Al Rosen who was born in 1924, and more recently, rapper Ja Rule in 1976. In the UK, actor Joss Ackland (b1928), actress Wendi Peters (b1968) and footballer Darren Ambrose (b1984) are some of our very own leap day babies.

Incredibly, some leaplings have also died on a leap day, such as James Milne Wilson, 8th premier of Tasmania who was born on 29th February 1812, and passed away on the same date in 1880.

So what are your plans for leap day? Maybe you are a leapling and are getting to celebrate your true birthday, or perhaps you are planning to propose to the love of your life. For most of us though, it will be just another day in the year, but however you choose to spend 29th this month, enjoy it – it only comes around every four years!