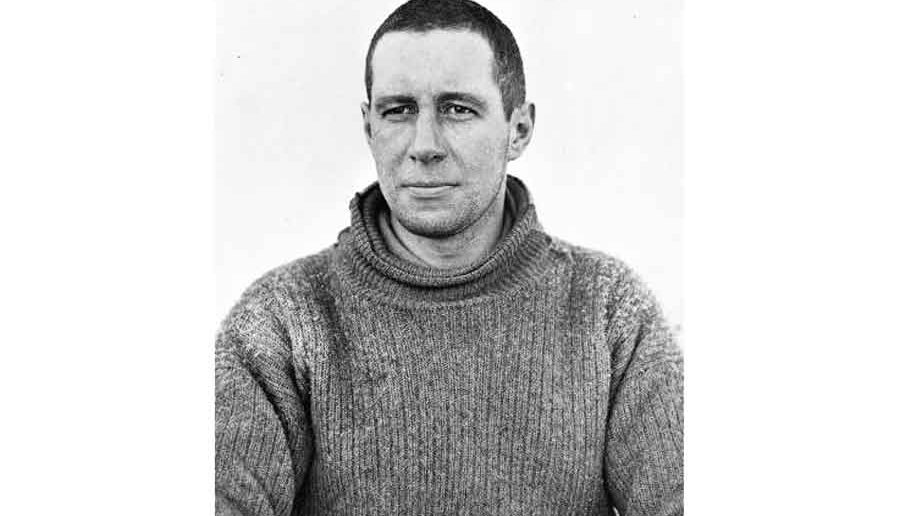 Lawrence Edward Grace Oates gave his life to try to save his fellow companions by walking out of a tent into a blizzard on the fateful expedition to the South Pole which he joined in 1910 led by Robert Falcon Scott.   Although Lawrence was born in London in 1880, Leeds has claim to his family who lived in the Meanwood area. In the 1881 Leeds census the entry for Lawrence age one can be seen along with parents William and Caroline.
Lawrence Oates was educated at South Lynn School, Eastbourne and Eton College. After leaving Eton in 1898 he joined the 3rd West Yorkshire Militia Regiment and after two years, joined the 6th Inniskilling Dragoons. He saw active service in the Boer War, wounded in March 1901 and sent home to recover returning to the war before the year ended. In 1902 he was promoted to Lieutenant, serving in Ireland, Egypt and India, then four years later, promoted to Captain.  His finest hour, albeit tragic, was yet to come.
Lawrence Oates inherited his father’s ‘Meanwoodside’ house and estate in Leeds. This house had been rebuilt in the 19th century with Lawrence’s grandfather renovating the grounds. In 1954, Leeds Council bought the estate and it became part of Meanwood Park. The house is now gone.
In 1910, Oates joined Robert Falcon Scott’s expedition to Antarctica, and with his skill with horses, was given charge of nineteen ponies that were used for hauling sledges. He also contributed £1000, towards the expedition. However, the ponies that Scott had brought were hardly up to standard and Oates described them in his diary as;
“…the greatest lot of crocks I have ever seen. Scott’s ignorance about marching with animals is colossal. Myself, I dislike Scott intensely and would chuck the whole thing if it were not that we are a British expedition.
On June 15th 1910, the ‘Terra Nova’ sailed from Cardiff without Scott for New Zealand. He later went out on a faster passenger ship catching up with ‘Terra Nova’ in South Africa, but left the ship to do some more fund raising. He re-joined the ‘Terra Nova’ once again in New Zealand.
The ship sailed from New Zealand in November 1910 arriving at Cape Evans in January 1911 establishing a base camp on Ross Island. On November 1st 1911, Scott and Oates along with fourteen other men began their journey to the Pole. At planned spots on the way, members of the support team were sent back until only five remained, Scott, Oates, Bowers, Wilson and Evans, to trek the last 167 miles to their goal reaching the Pole on the 18th of January 1912. Frustratingly for Scott, the Norwegian Roald Amundsen and his party had left a note in a tent to say that they had arrived there on December 14th 1911, just 35 days before. With heavy hearts all they could do now was to trek back.
The return journey proved to be extreme with blizzards lasting for weeks. The icy temperatures were beginning to show on Oates, but Edgar Evans was to be the first casualty taking a fall which eventually led to his death on February 17th. Frostbite, scurvy and bone numbing cold made progress slow. March arrived and on reaching Mount Hooper depot, expecting to find sustenance, all they found were fuel containers with perished stoppers, the contents having evaporated.
Oates was suffering very badly from frostbite, particularly in his toes which made walking almost impossible for him. Scott recorded in his diary:
“Oates foot worse. He has rare pluck and must know he can never get through  He asked Wilson (the doctor) if he had a chance this morning and, of course, Bill had to say he didn’t know. In point of fact, he has none.”
Oates asked to be left behind to lighten the load but Scott was having none of that and he gallantly fought on.
There was approximately 65 miles or so in between pre-laid depots and only one week’s supply of fuel and food stored at each depot. They needed to trek about nine miles a day to reach food and fuel to sustain them for the return journey over the Ross Ice Shelf. On they trekked through this ‘awful place,’ as Scott described it. Progress was slowed down as Oates bravely suffered in indescribable agony.
On the morning of March 17th, which coincidentally was Oates 32nd birthday and just about 21 miles from ‘One Ton Camp,’ he decided that he had to do something in order that there might be a chance that his companions would make it.  Scott wrote in his diary:
“He slept through the night before last hoping not to wake but woke in the morning, yesterday. It was blowing a blizzard …he said ‘I am just going outside and may be some time.’ He went out into the blizzard and we have not seen him since.”
Oates’ gallant effort proved unsuccessful. They trudged on for a further 20 miles towards ‘One Ton Camp,’ but a tremendous blizzard on March 20th stopped them only 11 miles from safety, and within 9 days they had all perished. Their frozen bodies were found on November 12 th 1912. Oates was never found, but a cairn and cross was erected where it was presumed he died. The inscription read:
“Hereabouts died a very gallant gentleman, Captain L.E.G. Oates Of the Inniskilling Dragoons. In March 1912, returning from the Pole, he walked willingly to his death in a blizzard, to try and save his  comrades, beset by hardships.’