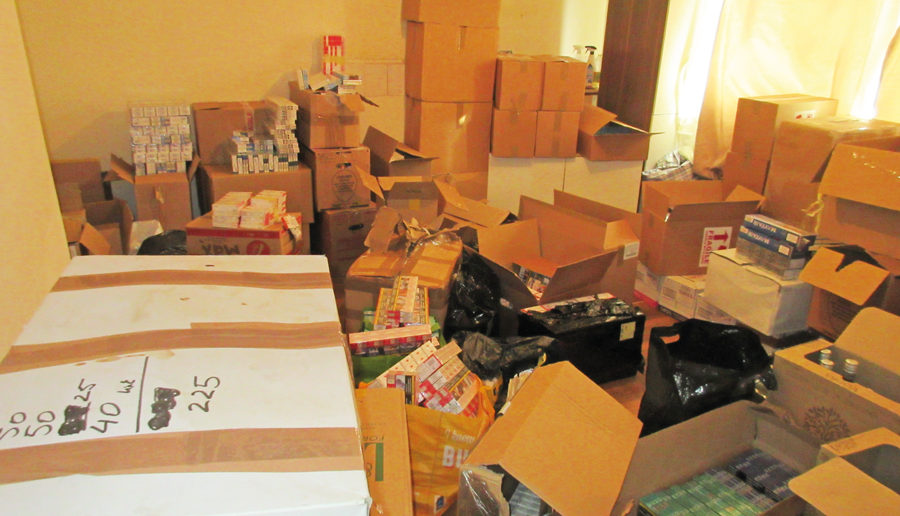 A multi-agency operation tackled illicit tobacco traders in Wakefield recently. Operation Window, with West Yorkshire Trading Standards Service, Wakefield licencing, West Yorkshire Police and Wagtail UK tobacco detection dogs resulted in a seizure of over half a million cigarettes, over 45kg of illegal hand rolling tobacco and a quantity of illegal cyclones. This was the largest seizure of illegal tobacco products by WYTS to date, with an estimated street value in excess of £150,000.

The illegal haul was found in concealments in 3 premises after positive indications from both Ted and Milo, specialist trained tobacco detection dogs from Wagtail UK ltd. If genuine, the value of the products would be in excess of £300,000.

The operation was undertaken as part of the Keep It Out campaign which is funded by the five Public Health authorities in West Yorkshire. The campaign which is now in its fourth year utilises marketing campaigns and multi-agency enforcement to tackle the problems of the illicit tobacco trade following consumer complaints and intelligence.

To date the enforcement element of the campaign has seen almost 2.5 million illegal cigarettes and over 780kg of illegal hand rolling tobacco taken off the streets of West Yorkshire. With more inspections planned in the county over the coming weeks these figures are likely to increase.

Councillor David Jones, Deputy Cabinet Member for Adults and Health Wakefield District Council, who was present on the day said; “The illegal sale of tobacco in communities enables and encourages young children to buy it cheaply. It is essential that partners are working together to tackle traders that break the law as it appears there is other criminality linked to illegal tobacco taking place.”

David Lodge, Head of West Yorkshire Trading Standards said; “We are committed to the fight against illegal tobacco. By taking tough action and working with partners this operation has taken a significant amount of illegal tobacco off the streets.I would like to thank members of the public for reporting illegal sales and encourage everyone to continue doing so to reduce the harm caused by tobacco in our communities. Anyone wanting to report illegal tobacco activity can do so anonymously by telephoning the illegal tobacco hotline on 0300 999 0000 or by visiting www.keep-it-out.co.uk”.