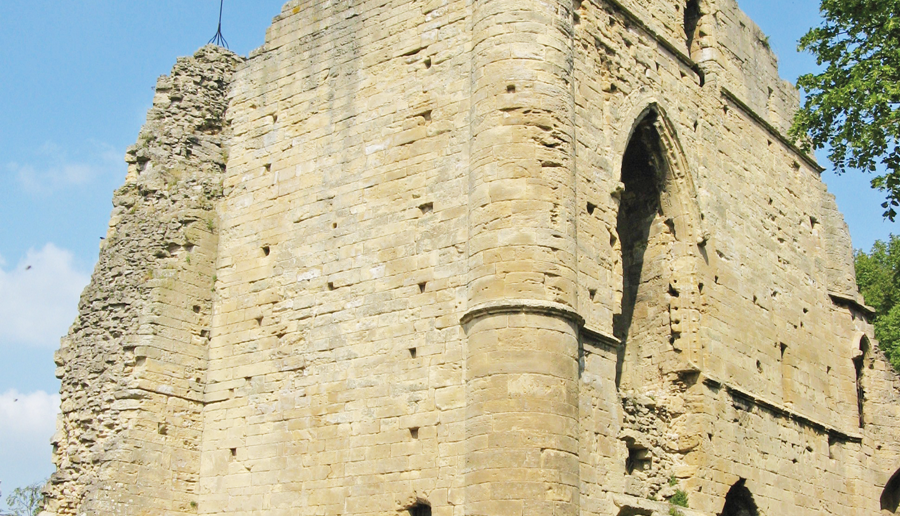 This month I visited Knaresborough Castle. A royal stronghold in the north of England, it is not far from Leeds, so over the years I have visited many times, and always enjoyed my time spent in the town on days out. I recently returned with my family, and delved into the history of the castle.

There has been a castle on this site since just after the Norman Conquest, but it is thought that there was a fortification there much earlier, possibly from Anglo-Saxon times. Historians are unsure as to who originally built the castle, as the first documentation mentioning it is from the time of Henry I. His Pipe Rolls (financial document) records that £11 was spent on strengthening it by the custodian at the time Eustace Fitz-John. There are no earlier records of the castle being built. King John, Edward I and Edward II all spent large amounts of money on the castle reinforcing it over the years for different reasons such as changing needs. During Edward II’s reign, the castle was seized by supporters of the Earl of Lancaster, but after a three month siege the King’s Constable recaptured it. During raids into the north of England by the Scots in the 14th century, Knaresborough Castle remained the only safe haven after much of the town was burnt down.

Large parts of the castle were demolished in the Civil War but the keep is still quite intact. Inside you can still see traces of the whitewash on the walls, as the interior was originally painted. The servant’s stairwell is also intact. The best-preserved feature is the dungeon – the design of a central column with twelve rib vaults is unique to the whole UK. Carved into the walls of the dungeon you can clearly see arrow head graffiti which could be linked to arrow production in the castle. But by far the most impressive feature is the Sallyport. The Sallyport is basically a secret tunnel designed to be used for lightening raids on sieging armies and their provisions without being noticed. The tunnel is large enough to get quite a sizeable force out quickly. The exit is on the cliff face which would have been covered over with branches and greenery to disguise it and only a trusted few would have known of its existence. The Sallyport can be accessed today by the public on guided tours. Also within the castle grounds is the Courthouse Museum. The lower storey of the courthouse is the oldest surviving part of the castle dating from around the early 13th century or late 12th century. Originally it would have been lodgings for castle officials and a chapel. In around 1600 the court was built for the Honour of Knaresborough and it remained the official court of the area for 300 years. There is still the original Tudor courtroom to be seen today complete with the oak furniture and a trapdoor out of which the accused would appear from to stand trial.

It is well worth a visit to the castle when you are in Knaresborough, you can take in the history of the building and the stunning views across the River Nidd and the viaduct are unrivalled from the castle’s vantage point high up on its rocky outcrop!