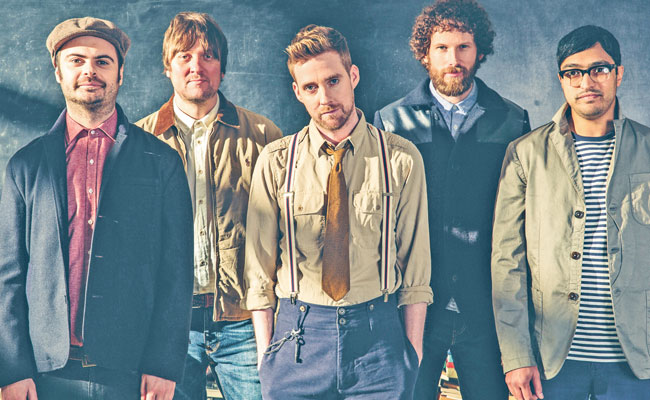 Yorkshire’s all conquering No.1 pop stars Kaiser Chiefs have confirmed they will headline a giant homecoming show at Leeds First Direct Arena on February 14th 2015.

The band, who originally formed in Leeds in 2000 under the name of Parva and went on to hit No.1 with both their debut album ‘Employment’ and 2007 single “Ruby,” have won Brit Awards, NME Awards and been nominated for the Mercury Music Prize, and have just spent two weeks at the top of the UK Top 40 Album Chart with their fifth studio album, ‘Education, Education, Education & War’. The new album debuted at No.1 and held on to the position for a second week – as the band said, “Two weeks at the top! We haven’t been here for a while, it feels fantastic. Thanks to everyone who stuck by us. It’s been emotional.”

Currently on tour in Europe following his stint as a judge on BBC TV’s The Voice, Kaiser Chiefs frontman Ricky Wilson said today, “The last few months have been great – we’re enjoying playing the new album and getting our songs ready for our festival slots and then, to top it off, we get to start next year at Leeds Arena! There is something special about doing a gig in the place where you grew up.”

Also speaking of the Leeds Arena date, bassist Simon Rix said, “It’s a great time for the Leeds music scene, there’s a lot going on right now. We’re so happy to be able to play the new Arena again, nothing can match the support we get from the Yorkshire crowds”.

It will be a busy summer for Kaiser Chiefs with the band set to play at V Festival, T In The Park and Glastonbury festivals alongside a number of European dates plus a North American tour.

Talking of their new No.1 hit album ‘Education, Education, Education & War’ (the title a reference to Tony Blair’s famous 2005 speech on the power of education), Ricky said, “At first the songs came from a very personal anger. But then I thought back to what I’d enjoyed writing about in the beginning, with ‘Employment’, and what I enjoyed then was looking around and writing about what I saw. And so over the next year I began to write songs about living in this country, about the thoughts that inspired in me.”

After more than a decade together, four albums, platinum record sales, a volley of Top Ten singles and three Brit Awards, it would have been simple for Kaiser Chiefs to sit back and coast a while, to enjoy the warm glow of being one of Britain’s most cherished bands. But in late 2012 there came a change: the departure of founder member and drummer Nick Hodgson. Yet an event that might have derailed the band entirely instead it lit a fire that has carried the Kaiser Chiefs forward, through a period of re-evaluation and reinforcement, to create an album that is their most considered, literate, and impassioned record to date.

Following Nick’s departure, the band’s remaining members, lead singer and lyricist Ricky Wilson, bassist Simon Rix, guitarist Andrew White and keyboardist Nick Baines, decamped to Real World Studios to see if they could kindle something new. By the end of their first week in the studio, Rix recalls, they had “Nineteen or twenty ideas for songs.” And more importantly, Wilson says, “We had the spark that gave us hope.”

The Kaiser Chiefs that emerged from their 2012 near-collapse appear regalvanaised, bolstered by the addition of a new drummer, Vijay Mistry [formerly of Club Smith]and inspired by a new sense of freedom and musical possibility. They are angry, yes, but they are also inspired and ambitious and hungry for success. The album was eventually recorded in Atlanta, Georgia — a move that gave the band the opportunity to view themselves from a new perspective. “In a weird way working in America has been good for us, because unlike some bands who work in America and end up sounding American, I think it’s solidified how British we are,” says Wilson.